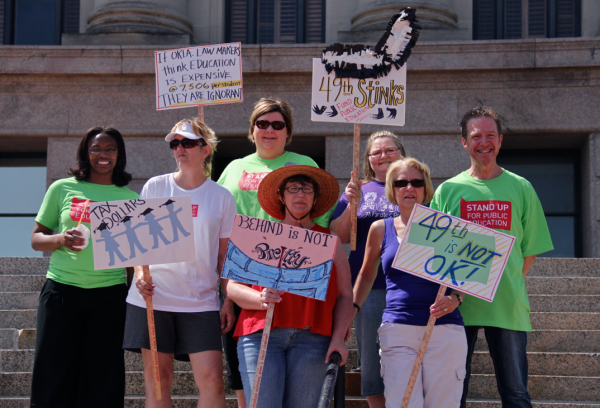 Parents, educators, and members of the Oklahoma Educator Association take to the Capitol steps Saturday to raise awareness and celebrate. They believe "public education should be for the public."

It’s easy to develop outrage fatigue when following politics, after all this is a state that wants to give embryos rights but is ranked 49th in the nation when it comes to dollars it spent educating students. Clearly somewhere between birth and school there’s a disconnect when it comes to resources the state is willing to spend on improving lives. But Saturday’s gathering of educators, parents, students, and supporters of public education was as much about protest with as it was about a celebration of public education.

The event was organized by the Oklahoma Education Association. It is a non-profit organization with nearly 40,000 members in Oklahoma and it is comprised of parents, teachers, school staff, retired teachers, and higher education institutions. The OEA says it believes, “That public education is the cornerstone of a democratic society and that education employees, parents, community leaders and elected officials should work together to promote quality public education.” They poll and provide other research institutions data for the state of education in Oklahoma. Each Spring the OEA puts forth a list of current legislative issues, which is available on their website.

Linda Hampton, OEA president, said that one of the bills the organization does not support, House Bill 3111 which would deregulate schools and in Hampton’s estimation go against 70 years of progress in public eduction, was tabled for now because legislators have decided to let Oklahoma educators enact other changes they passed, such as 3rd grader retention testing, before pushing forward on these kinds of deregulation bills.Â  The OEA recognizes that the American Legislative Exchange Council (ALEC) is the lobbying force behind bills that mostly serve the interests of private industry as applied to public policy.

Hampton said that deregulation would jeopardize initiatives added to Oklahoma’s pubic eduction policy in one fell swoop because if private enterprise legislation had passed this session, public schools would no longer be mandated to offer retirement, base pay rates for teachers, and more. Hampton said that change is necessary and that people should think of it as a compromise for all, but she stressed that it is vital to look at what works and what doesn’t work before passing legislation that could wipe out 70 years of progressive public policy.

The OEA is watching a few bills in the meantime. Even though the Oklahoma legislative session is almost over Associate Executive Director and Chief lobbyist, Amy Sparks said that it is not unusual for law makers to try to sneak things past the house using a variety of lesser known loopholes that exploit the use of language in bills that have passed to piggy back legislation that did not get past the house.Â  Sparks said that often it’s in these last few weeks that OEA has to keep a keen eye on what’s going on because bills they thought were tabled can come back in a blink of an eye.

There is some concern about a bill which has made it out of committee and been signed by Gov. Fallin. It known as “A-F Rules” and deals with assigning a letter grade to schools. What concerns the OEA and law makers in the House and the Senate, is that the process of evaluating schools is not readily transparent. Sparks said even the bill’s sponsor, Lee Deenny R. Cushing, acknowledges that the process is confusing and that this is an issue that has turned out to be largely non-partisan.

But overall, the event on Saturday was not one of outrage as much as celebration. It was festive more than it was bristling with loud sentiments of resentment and indignation. Sno-cones and drinks were served, on the sound system old favorites played as people congregated in groups to picnic under the trees. Also available at the event were boxes and boxes of books. Let it not be said these educators do not know how to take an opportunity to expand minds. 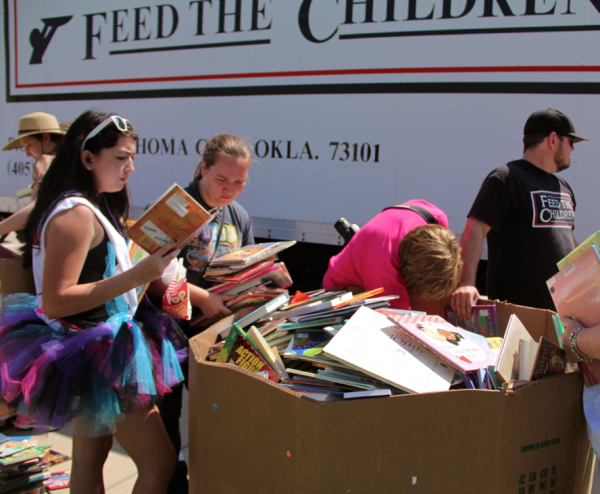 Feed The Children in conjunction with Better World Books provided books to anyone willing to take them in an effort to feed minds too. Erin Carlstrom, director of educational programs, said that feeding minds helps in breaking the cycle of poverty.