â€œYep, you are, I saw you speak at the Capitol! You are the face of womenâ€™s rights!â€ She insists. 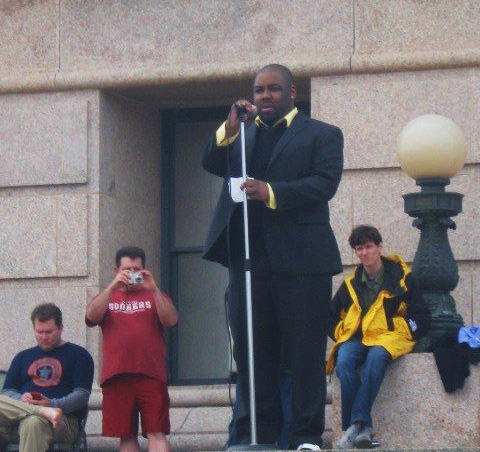 People think things. And sometimes, despite evidence to the contrary, they will still think things. It is insane to insist, or even believe that I, a black male, am the voice of womenâ€™s rights. I am a comedian, and my act isnâ€™t even necessarily â€œpro-womanâ€ all the time. But because I took a gig that a lot of people saw, at least in the minds of those people thatâ€™s who I am, a womanâ€™s rights activist. Iâ€™m not smart or anything, but from what I gather people tend to not shake first impressions. So when as a kid, your dad tells you that being gay is a choice, and as far as choices go it is a wrong one, that tends to stick in people’s minds. Iâ€™m not gay, but friends of mine are, and from what I gather it wasnâ€™t a choice they made one day, it was something they lived with and have had to battle with as they grow up in a society that doesnâ€™t understand or accept them; think X-Men, but instead of having telekinesis or adamantium claws, they can help you match suit separates!

Lately the GOP has been attacking both women and gays. Gays get it tougher, because NO ONE can argue that being a woman isnâ€™t something you are born with. Conservatives want women to sit down and shut up, but they want gay people to stop existing entirely. It’s super easy to dismiss being gay as an abhorrent lifestyle choice, because it’s a small minority- only 10% of the population. Once you’re convinced it’s a choice, it’s a short leap from there to the sort of conspiratorial thinking that blames gays for everything from the high divorce rate (because the gays made you bang your secretary?) to Hurricane Katrina (because the gays used their telekinesis to warm the waters of the gulf of Mexico?). WHY ARE THEY DOING THIS TO US?

Also, apparently God hates them. It’s on the internet, look it up.Â  Leviticus 20:13 “If a man also lie with mankind, as he lieth with a woman, both of them have committed an abomination: they shall surely be put to death; their blood shall be upon them.” So pretty cut and dry, open and shut case right? Itâ€™s in the bible and we are a Christian nation (despite that pesky first amendment) but what else does Leviticus say? Can we openly hate Mexicans too?! Nope, they didn’t know about the Aztecs yet. If you run into any Canaanites, you can hate them, though. You can commit murder-suicide if the man cheats (20:10), and this is compounded if you sleep with your wife and her mom- you are all to be burnt to death (20:14), ruining a wacky sitcom premise. If you curse God, the community gets to stone you to death (24:14-16) and of course if you sleep with a woman on her period, you are to both be cut off from your people, which I think means all humans (20:18). Okay, but aside from that, Christianity is a peaceful religion (IGNORE DEUTERONOMY 17:2-7 AT ALL COSTS) and is inherent in mankind, (remember being born and talking about Jesus and shit? Meee too!)

So why do we persecute homosexuals? Because itâ€™s different. Straight people find it icky. They have sex differently, and may have created AIDS on an airplane. [citation needed]

We persecute gays because it is easy. The way society is set up, everyone is always looking for an angle to be better than the next guy. Even the lowest most uneducated person wants to look at someone and say â€œwell I know that my shit is messed up, but THESE people are really terrible,â€ The American tradition is to just lump that on black folks, immigrants, or, if we were feeling nostalgic, “The Jews”, But since OPEN racial hatred is passe these days, we needed another group to treat sub-humanly and make our lowest common denominator feel good about himself. Enter the gays.

Gays arenâ€™t out to kill marriage. They are just people who want to be treated like people. As rational human beings I think maybe we should stand a little more firmly in support of gays, they are in the corner of the rational person more often than not.

Letâ€™s just love each other, even if we donâ€™t always understand each other*.

*Except the Kardashians. Seriously, how are they still a thing?