Tuesday night at the Society saw four bands, a garage crowded with concertgoers, a gallery full of artwork – and one Boston Terrier.Â The dog in question, Baybee, belonged to So Called Savages frontman Bradlee Meredith and wove in and out of groups of people chatting between sets.

The show, which was slated to begin at 7, started more along the lines of 7:30. No technical difficulties or anything of the sort – rather, the bands encouraged us all to take a few minutes and browse the works hanging on all the walls.

“Feel free to take a look around,” the doorman said, some of the artists themselves coming around to talk to the concertgoers about any works that caught their eye. During my trek around each room of the gallery, I had to excuse myself and squeeze past two gentlemen talking in a doorway. The taller of the two said a hello and good evening.

First up in the lineup was Ruben and Patrick, what could best be summed up as the lovechild of hardcore and spoken word. Patrick read the lyrics from his phone, offering his apologies to an audience that didn’t really need them. “I write a lot,” he said. “It’s crazy trying to keep up with them all.”

Between each set, the crowd would disperse, half of us going to smoke a cigarette or two while the other half snuck off to buy a beer from the closest convenience store. The smoke breaks between each set were a great way to break the ice between people. As So Called Savages set up their equipment, Baybee wandered the garage, trotting faithfully after Brad as he unloaded their amps.

Next to take the stage, Bradlee and the rest of So Called Savages took a moment to chat with the audience before starting. No frills, the band launched into one of their harder-hitting tunes. I wasn’t able to push my way to the front of the crowd, but quite a few ACM@UCO students, friends of Bradlee’s from class, did. From the front of the crowd to those hovering under the tents outside, everyone was moving – even if it was just to tap their foot.

After So Called Savages was Deaf Brother. I’ve never actually seen these guys before Tuesday, but they’re not someone you want to miss. In fact, if you haven’t heard them before, take a minute and give this a listen. I’ll wait.

Deaf Brother, to that point, was the part of the show I’d say had the most crowd-band interaction. Lead singer Blake Wiggins hurled himself at those lucky enough to be front row. Mostly ACM students that are also friends with this band, they’d push him away – or he’d press his forehead to theirs and scream the lyrics together into the mike. There were a bunch of times during this set I wished I’d pushed my way to the front.

If you catch a Deaf Brother show in future, be prepared to hear songs inspired by ACM ‘inside jokes’, and to get mussed up a bit. And by the way, they love when you scream along.

The longest smoke break followed Deaf Brother, and during this one I saw a lot of people looking around bored. A group of girls talked loudly against the outside wall as one chain smoked and talked about an ex-boyfriend. During this time I snuck off to the back hallway, stuck in the bathroom line next to a guy I’d never met.

Guys, I’ll say this – this show was a perfect opportunity to meet new people. I’ve seen more Facebook friend requests accepted on my news feed in the hours after the show than in the past few months. People bonded over a shared cigarette or even a “oh, you know the guys in that band?”

While I waited in the restroom line, this guy chatted with me about the “DO NOT ENTER” sign posted on a neighboring door.

“What d’ya think is in there?” he asked.

I mean, if that’s your worst fear. Or your definition of the ‘root of all evil.’

Eventually, it was time for Listener. I’ll admit – I had only heard a handful of releases from their most recent album, Wooden Heart. They’re what I’d consider an acquired taste. Myself, I love it – they are a spoken word band, lyrics twisting and flowing over a guitar riff or loop. Vocalist and lyricist Dan Smith has a gnarly mustache and (is this possible?) an even gnarlier voice.

Give them a listen and you might see what I mean.

As soon as word started spreading through the crowd that it was time, I saw even a couple with their kid squeeze into the garage, the man propping the little boy on his shoulders. At this point, I finally mustered the courage to push past the people until I got a few feet back from the front. After a few minutes of people pushing and shifting from one foot to the other, Dan looked out at us all.

“I’d like to ask you all a favor,” he said. “Just as human beings. Would you all mind sitting down for me?”

Although I’m sure most people in that room don’t frequent shows that would be ‘sit-down’ shows, we all complied. Only a few people remained standing along the side walls, where there wasn’t any room to sit. After a few minutes, Dan launched into one of their songs. People pulled out their phones, the girls directly in front of me snapping quick pictures on Instagram then setting their phones in their lap. 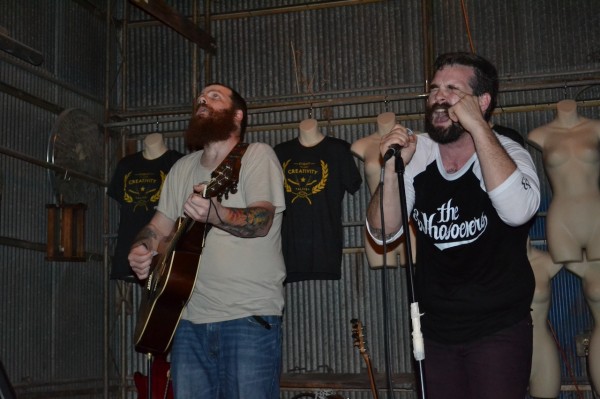 If you have never been blessed with an opportunity to see Listener, I want to recommend you change that ASAP. Between each song, Dan chatted with the audience, asking “How are you all doing tonight?” and answering all manner of questions.

“What’s your favorite color?” Will Ogletree yelled out. “Clear,” Dan quipped. A little boy in the back shouted, “yellow!”

“That’s a good color,” Dan said and took another question, only for the little boy to shout “yellow!” again.

One would think at first that the main reason Dan spent so much time talking with the audience was because his bass amp had quit working. But between each set, you started to figure it out – hey, he’s really that nice a guy.

The setlist boasted pretty much every standout track from Wooden Heart, if you could really pick one over another as a “standout.” Each time Dan announced a song, the crowd would hoot and clap. During “I Don’t Want To Live Forever,” I looked around as I sang along, and saw at least half the audience doing the same. If there were very many people there who didn’t know the words, you wouldn’t have known. Nor would anyone have cared.

To introduce fan favorite “You Were a House on Fire,” Dan talked about something I definitely can relate to, as could probably most of my age group.

This is the first show I have been to locally that has actually made me cry, and as I snuck a glance around the room between songs I saw a few other people trying to be sneaky and wipe their eyes. Guys, even. Yeah, I saw you.

Interestingly enough, this is the first national act I’ve had the luck to see in concert. I go to shows often, but I usually only frequent local venues and catch local bands when they play Bad Granny’s or Paseo Underground, or other local haunts.

But Listener is by far the best show I’ve been to yet. For the hour-plus they had the stage, an entire audience was captivated. One of the highlights of the night was singing, “I don’t want to live forever, I just want to live for now,” and hearing the voices of everyone else together.

What more is music about than that shared experience with everyone else?

To close, Dan said, “I want to thank you all for being here tonight. If you’re in bands and you’re ever in town, we could give you a place to stay. Heck, even if you’re not in a band. There are too many of those, am I right?”

Most of the crowd scattered afterward, to hit another band’s house party or to smoke a cigarette. A small group of us stayed behind, waiting off to the side to talk to Dan. It’s not every show the headlining artist will stick around after the night closes, but Dan hugged each of us and talked to us.

Cary Cody, who’d been taking photographs throughout the night and during the set, went up and met him. We’d already worked it out – he’d snap a shot of me and Dan if I took one of them first. He gave the thumbs-up and I snapped it.

“Can I see that?” Dan asked, and we handed the camera over. So Dan turned the camera on us, snapping a picture of the group that’d stayed behind. After that, he hugged me and I thanked him for what I days later still consider my best concert experience yet (and likely for many to come). 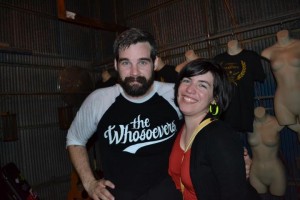 “You have never lived because you have never died,” says one of their songs. But I’d venture to say you haven’t lived, not to this level, until you have a chance to see Listener.

They’re gone from Oklahoma for awhile, but if you’ve got time for a spur-of-the-moment road trip, they’re playing Mesa, Ariz. on Friday, May 4 before heading to the East coast in June.

Check out Deaf Brother on Bandcamp or on Facebook.