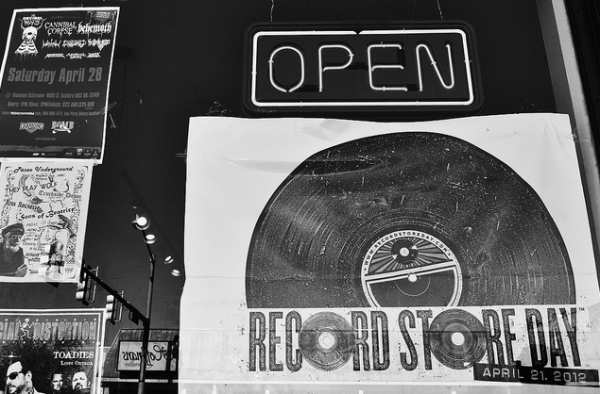 Window of Guestroom Records on 36th and Western. Photo by Lynne Rostochil.

For decades, all kinds of technologies have promised to replace the vinyl record, but those perfectly round black discs are a lot like the resilient cockroach, an under-estimated creature that breezed through the ice age and ultimately outlasted its supposedly fiercer competitors. Indeed, vinyl has triumphed over every bright, shiny, new technology that has tried so heartily to slaughter it once and for all — reel to reel tapes that only the most skilled AV expert knew how to thread, 8-track tapes that would so irritatingly skip tracks in the middle of a song, cassettes that temperamental players loved to gobble up and spit out, and CDs that were great until downloads replaced them completely within a shockingly brief amount of time.

But, vinyl is an entirely different story. Like the mighty cockroach, it has faced extinction countless times, yet stubbornly refuses to die. In fact, for the first time since MP-whatevers obliterated the CD market several years ago and killed the need for the likes of Sound Warehouse et. al., independent record stores are popping up all over the place. The main reason is vinyl. A lot of its resilience has to do with the quality of the sound. Digital is not always better since some of the original sound wave is missing during the conversion. For instance CD, which generally hold more information than an MP3, only take snapshots of the original sound wave, so it is not the complete picture. However, vinyl, in it’s analog format, captures the sound wave in its entirety because the grooves mirror the waveforms, therefore there is little loss of information. Hence records have a quality of richness to them that makes modern formats seem sterile to most audiophiles. Additionally, records are not immune to time. Lint and scratches can erode the quality. Although some seems to like the hissing and pops. Even so, people young and old are avidly collecting again, and bands like OKC’s own Flaming Lips, singer Katy Perry, and many other contemporary artists are releasing their music on records to satisfy the increasing demand for music on this 100+-year-old technology. Some of the added benefits to buying a new record is not only the vinyl experience, but the packaging inserts, like photography of the band or artist, as well as bonus offers. Typically, although not always, new albums will offer a complementary MP3 download with purchase of the album. 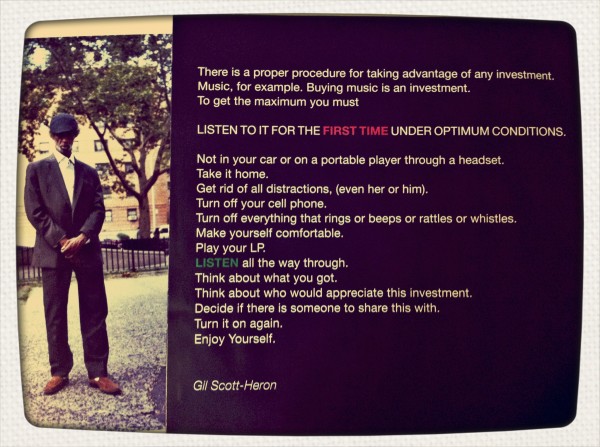 Example of bonus packaging in Gil Scott Heron's "I'm New Here" album. On the left is a portrait of Gil Scott Heron, which is one of two prints found in the album, and on the right is a message for the listener that has been printed on the record sleeve.Â This album also included a complimentary MP3 download of the entire record. Photo by Helen Grant.

To recognize the resurgence of the album, local record stores across the country celebrated the 5th annual National Record Store Day on Saturday. Here in OKC, legendary DJ, Dale Wehba, stopped by the recently-opened Trolley Stop Records on Classen to host a music trivia show, while patrons snapped up some great vintage finds at a record swap meet organized by the store’s owner, John Dunning. John, who collects just about everything (including four good-natured dogs who hang out in the shop with him) also sells old record players, 45’s, 78’s, sheet music, and vintage magazines at Trolley Stop, which, interestingly, gets its name from the old University interurban station that once sat across the parking lot.

As always, the atmosphere was low key and funky at the venerable Charlie’s in the old Patio building on Classen, which is the premiere store in town to search for old jazz, blues, and R&B records. An eccentric’s lusty wet dream (and a neat freak’s worst nightmare), Charlie’s is a crazy-but-cool amalgamation of all of the Charlie’s passions — music, old band instruments, wild African masks, and ancient microphones and cameras — all of which is for sale for the right price.

If you missed the festivities of National Record Store Day at one of these thriving establishments, don’t despair — there’s always next year. In the meantime, if you long for the days when you would buy an album, put it on your prized turntable, oh-so-carefully lower the needle onto the magical black disc, and hold your breath through the initial crackles of sound until the first brilliant note of music played, then maybe it’s time to hit the record store. Most are open 7 days a week. In addition to the ones I’ve already mentioned, OKC boasts several other places to find good albums at reasonable prices: Size records near Britton and Western, Bad Granny’s and Dig It in the Plaza District, The RINK in Bethany, and the Golden Goose flea market at NE 23rd and Douglas. 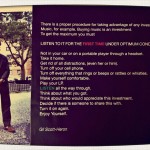 Example of bonus packaging in Gil Scott Heron’s “I’m New Here” album. On the left is a portriat of Gil Scott Heron, which is one of two prints found in the album, and on the right is a message for the listener. This album also included a complimentary MP3 download of the entire record. Photo by Helen Grant. 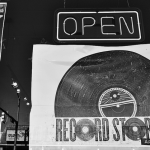 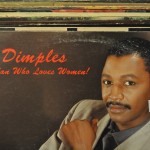 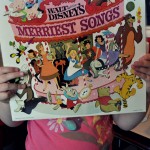 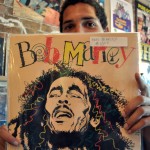 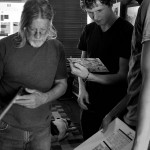 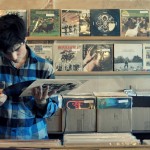 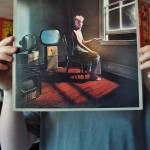 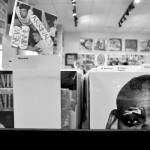 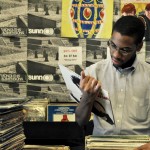 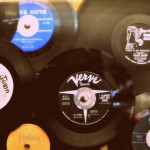 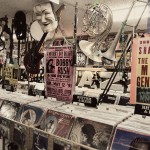 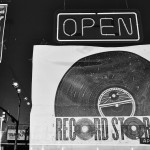 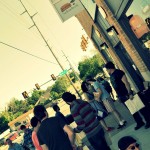 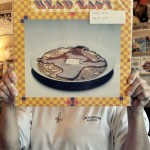