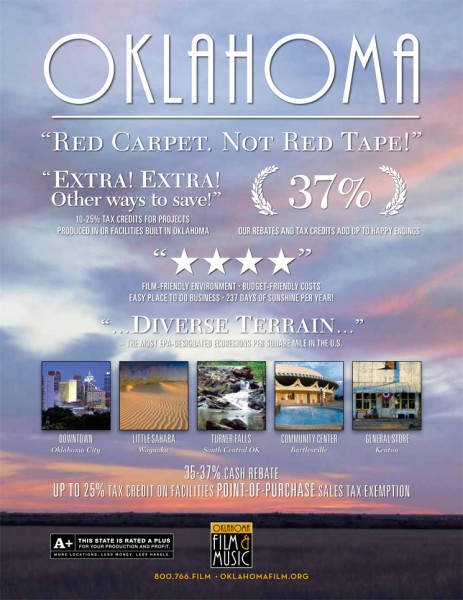 These are just some of the reasons to bring a production to the Sooner State. For more reasons, check out: http://www.ok.gov/oklahomafilm/

The Outsiders. UHF. Twister. Elizabethtown. Rain Man. All of these films were partially shot in Oklahoma.

As Oklahoma ponders changes to the income tax system and changes to tax credits, perhaps now would be a good time to reflect on motion pictures.

Oklahoma has an office called the Oklahoma Film & Music Office, and its purpose is to lure out-of-state productions to our fair state with tax credits that can reduce the cost of doing business.

Now, at this time, the Oklahoma Film & Music Office is not accepting any new Film Enhancement Rebate applications, but its future is incredibly fluid.

The last time most Oklahomans heard about the Film & Music Office was when it was announced that the new Kevin Durant film “Thunderstruck” would not be shooting some scenes in-state due to better incentives offered in Louisiana.

According to documents from the film office’s website, “The Oklahoma Film Enhancement Rebate offers a Thirty-five percent to Thirty-seven percent (35% to 37%) cash rebate on Oklahoma expenditures to qualifying companies filming within Oklahoma.” That 37 percent figure is only available if the production spends $20,000 or more on Oklahoma music as well. The reason Oklahoma couldn’t lure “Thunderstruck” was that the office ran out of funds for the year before it could satiate the production. Louisiana Economic Development, the department of Louisiana who handles film tax credits, does not have a limit on the amount of credits available to a production but does have strict stipulations to be able eligible for them.

Would Oklahoma benefit from an uncapped film tax credit? Who knows? Oklahoma has a lot of tax credits just waiting to be tapped into, and this is just one of them. Other tax incentive programs give existing Oklahoma businesses a chance to be more competitive and able to provide more for their employees.

Perhaps what Oklahoma needs is a good TV show to be shot here, providing a steady stream of income and jobs for Oklahomans.

Breaking Bad, whose meth fueled storylines could work just as easily in our fare state, is set in Albuquerque, NM and shot there as well. The Walking Dead, which recently finished up its second season on AMC, is not only set in Georgia, but shot in Georgia. As for the zombies? Well, they’re just shot in the head.

Is this some kind of conspiracy between AMC and these two states? Possibly. Even Mad Men has shot episodes in New York, but now they shoot most of it in Los Angeles. What each of these shows does have is authenticity, so someone please write a new show set in Oklahoma and let’s shoot it ASAP!

Either way, the whole point of a tax incentive is to provide jobs. For the past year, Oklahoma’s unemployment numbers have hung around 6 percent. Compared to the national statistic that number sounds pretty good, but it doesn’t even factor in how many Oklahomans are in a job they want out of, who really wants record and edit virtual home tours when they invested time and money into earning a degree in filming from one of our state universities?

If the capitol were to bolster the film office instead of cutting it’s funding, we could bring more film jobs to Oklahomans and more smiling faces to our state. And more importantly, that’s more smiling faces with happy open wallets spending money on services, goods, and taxes.

As we hope to get our state’s budget back on track, hopefully the Capitol remembers to keep this great tax incentive. Frankly, we should just settle for the Red Snapper and not be fooled by what lawmakers are saying is in the box.

Editor’s Note: SB 1623 (the one that will reduce rebates) passed the Senate 27-16. It’s in the House of Representatives and it is unclear which legislators will be involved with the House version. There’s a group called Save Oklahoma Film organizing the effort to stop the proposed changes. Check them out.

One comment to “Don’t Yell “Cut” On The Film Office”