Taj and I go way back.

I was a frequent customer back when I was in high school, at their original location across from the Blockbuster Video on NW Expressway (this was not only because they were within walking distance of my house and I didn’t have a drivers license). My old neighborhood was not the most happening place on the planet, but when you’re 17, there’s something to be said for being able to walk to the Indian restaurant and the record store in the same trip. I ate there a lot, I took prom dates there, I lived, I laughed, I ate naan.

As we go through life living in a city, we make psychic maps of the places that are important to us, or where things that were important in our lives happened. Taj occupies a large place on my map of the northwest side, which is why I was so sad to see it go, and why I was thrilled to see it return. Like a bright, locally owned point of light in a dark sea of chain restaurants that is the Northwest Expressway, it darkened the sky dramatically when it went away. (This is why supporting local businesses is important- no one ever mourns the passing of a Chili’s.) 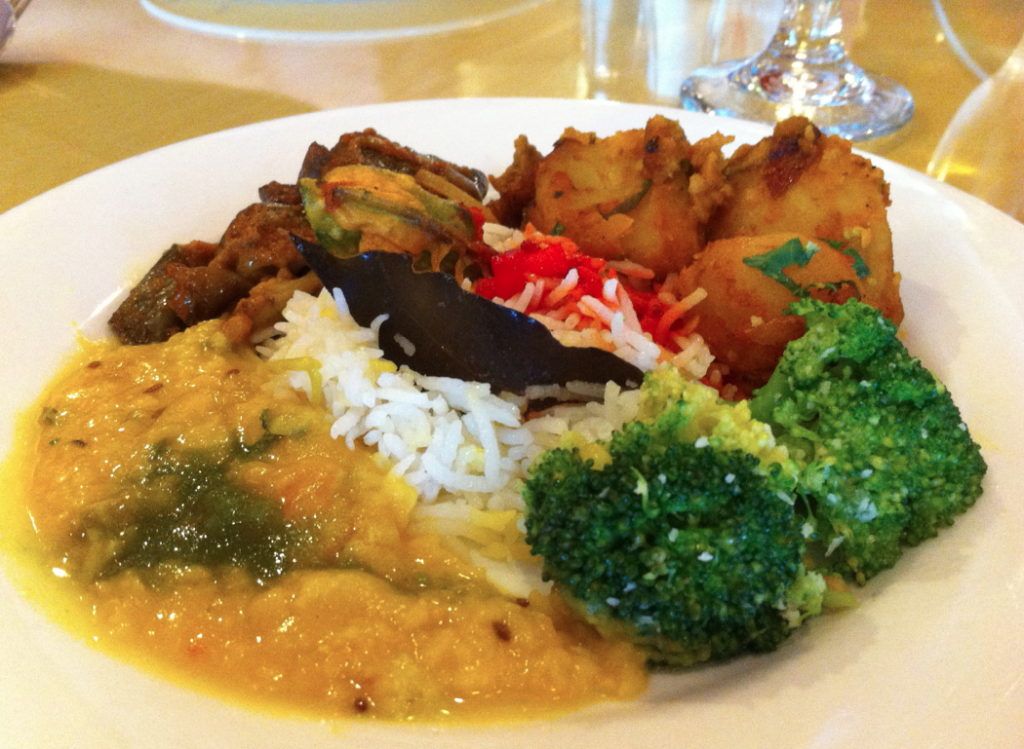 Some of the bounty of Taj

Like many of us who started out on the far northwest side, Taj has now moved much closer to the central city. Their new location is a literal stone’s throw away from a bunch of other great restaurants on the strip of 23rd St. closest to Oklahoma City University, and it feels like a good fit for the neighborhood.

I have to admit to a bit of apprehension on trying Taj again for the first time. It’s been a long time, and there have been other Indian restaurants since then. Some of the new entries are downright fantastic (Kha Zana in Mayfair comes to mind, as does Kabob n’ Curry on Portland.) So many of the things I loved when I was younger have disappointed me ( including but not limited to Star Wars, Punk Rock, and Democracy) that I have become jaded and bitter. How could Taj possibly still be good as I remembered?

I can happily report that Taj is still good. The lamb curry is still the best in the city, the tikka masala is perfect, the naan is just the right consistency of chewy and fluffy, and the veggie options are appealing even to a hardcore carnivore like myself. I would happily eat there every day if I could get away with it.

As always, I have a few quibbles. I could do without the Indian/Chinese fusion dishes that have begun to infiltrate indian buffets across the city. Taj thankfully keeps these to a minimum. I also wish that they would bring back a few dishes from Taj Past, most notably the delicious Paneer Masala.

These are small complaints. Overall, the things I like about Taj are the things that I have always liked about it. Everything about it, from the understated dÃ©cor to the staff and the food, is tasteful, tasty, friendly and delightful. Like revisiting an old friend, I’m always happy to catch up with Taj.

Fittingly for an old friend, I just added them on Facebook.