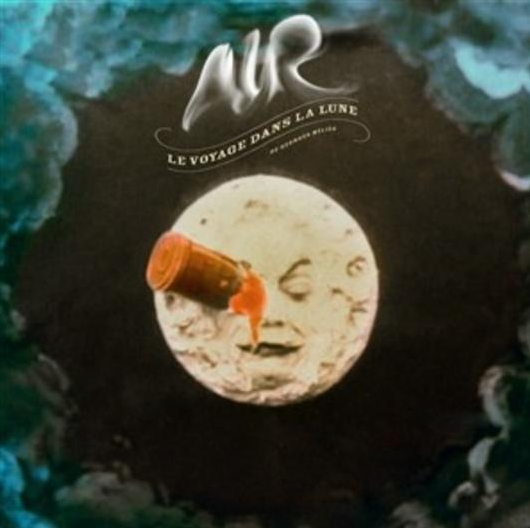 French electronica duo AIR, comprised of Nicolas Godin and Jean-BenoÃ®t Dunckel, are no strangers to film scores (Virgin Suicides, Lost in Translation and Marie Antoinette), so it’s perhaps not surprising that they were asked to compose a film soundtrack for Georges MÃ©liÃ¨s’ innovative 1902 film La Voyage Dans La Lune (A Trip to the Moon).

“Wait,” you may well say,Â  “Why are they scoring a 1902 silent science fiction film? Did Sophia Coppola go back in time and direct it?”

The backstory: a rare colorized version of the film, thought to have been lost to time, appeared in Spain circa 1993. In 2011 restoration efforts were completed and the people responsible for restoring the film asked Air to compose original music. The logic is obvious: innovative French electronic duo combined with innovative turn of the century French silent film. Gold!

According to an interview with NPR, members of Air stated the following:

“We had great freedom compared to our previous experience of composing for images. For once, since the director is dead, there was nobody above us telling us what to do: We were able to work with each image, because we knew that everything we recorded would be preserved in the film. We played facing the screen, to synchronize the music better, which caused a bit of neck ache… In fact, this was our first time composing for a silent film: With no dialogue, the soundtrack becomes one of the main narrative threads. That freed us up, I think. The euphoric aspect of our score comes partly from that.

A Trip to the Moon is undoubtedly more organic than most of our past projects. We wanted it to sound ‘handmade,’ knocked together, a bit like MÃ©liÃ¨s’ special effects. Everything is played live. We used the mellotron for the sound effects, an ancestor of the synthesizer which you could find in all the English theatres: Like MÃ©liÃ¨s’ film, our soundtrack is nourished by living art.”

“MÃ©liÃ¨s thought of his film as a series of scenes: It’s practically filmed theatre. With that static, vintage look, our music had to have dynamism, energy, modernity. Hence the importance we gave to rhythms: The drum is what allows you to most easily date a piece of music, to anchor it in the contemporary world.

Between Moon Safari and the original soundtrack of A Trip to the Moon, we learned how to compose for images. Our music, in its beginnings, was very pop; it’s become more experimental over time… Our role is similar to Madame Thuillier’s, who colored MÃ©liÃ¨s’ film, or to the role of musicians who played live in cinema theatres during a showing: It’s about prolonging the experience of film by stimulating the spectator’s brain. We don’t make rock music, but psycho-acoustic music, ambiance. That’s why our music works so well for voyages, and original soundtracks.”

As great as I think this is, and I think it is pretty fantastic, Iâ€™m fully aware some people are going to see this old film as combined with Airâ€™s futuristic ambient sound and be left wondering, â€œWhy on Earth would anyone have made this pairing instead of going the classical route?â€ I don’t have an answer for them, either you like it or you don’t. But I do wonder why, when Fritz Lang’s Metropolis was restored recently, no one thought to score it with Krautrock or Kraftwerk.

Clearly innovation points go to the French, this round.

Either way, when the 16-minute film had been scored, it inspired the band to create an entire album based off the project. The album La Voyage Dans La Lune clocks in at 31 minutes, so it is not very long, granted. But maybe that’s keeping with the spirit of the short film. Although if youâ€™re a long time listener of Air, I donâ€™t think youâ€™ll be disappointed. You can catch the streaming version of the La Voyage Dans La Lune at NPR’s First Listen. Victoria Legrand, of Beach House, and Au Revoir Simone also lend vocals to the album. As for the experience of the film as tied to the new soundtrack, it kind of reminds me of watching Pink Floydâ€™s Darkside of the Moon as paired with The Wizard of Oz. The trippy effect is similar, although those two compositions were never intended to go together. It is apparent that Air and La Voyage Dans La Lune were.

(An illustration of my reference point is embedded below. It also bears mentioning, in that’s a trivial point, Air’s music video for Sexy Boy from their album Moon Safari appears in color during the fantasy sequences and appears in black and white during the reality sequences. The Wizard of Oz is more of the same. Dorthy’s hum drum life is black and white, while the wonderful world of Oz is vividly bright.)