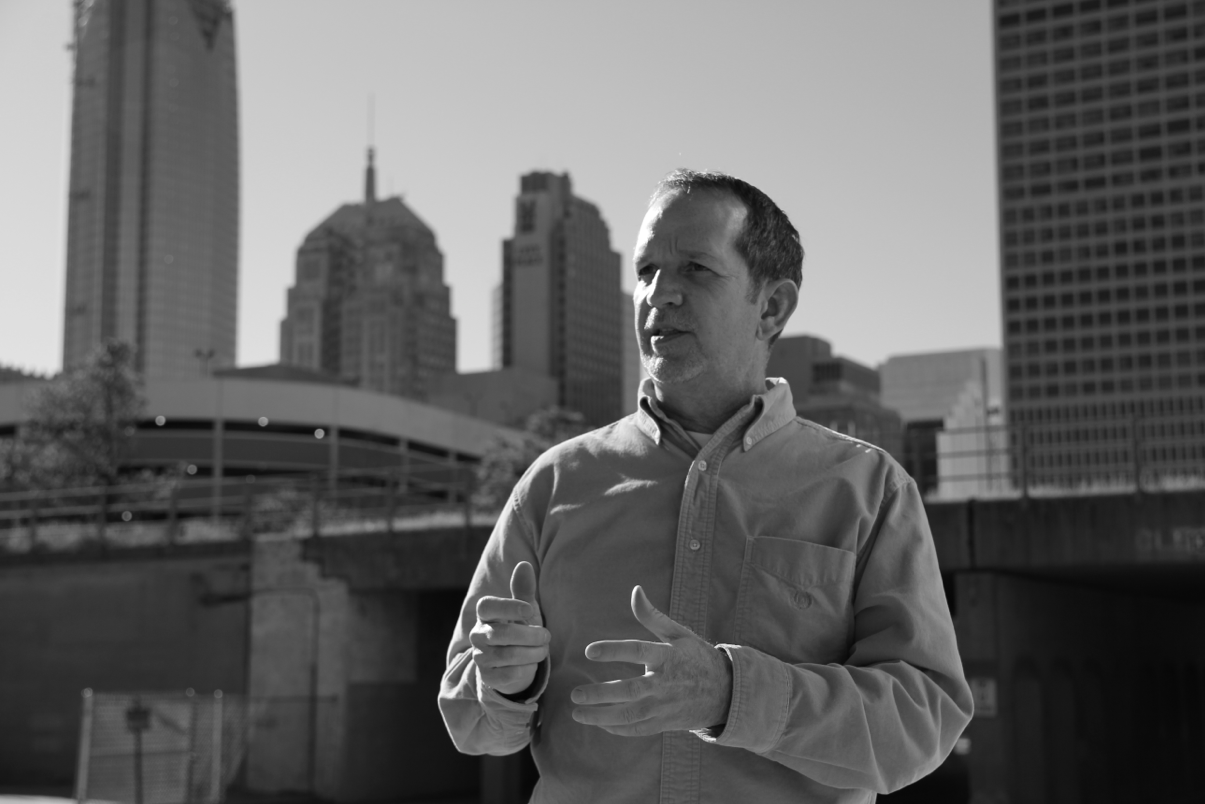 I met Dan Garrett at a fried chicken restaurant attached to a gas station while talking with a friend about Damien Hirst.Â  This is funny in hindsight, considering that Garrett is the most down-to-earth artist I’ve ever met. HeÂ  seems almost too grounded and earthy to be a professional artist, but his affable nature can be deceptive. He is just as likely to hold court on the work of De Kooning and early Jackson Pollock as to disarm you with his quiet sense of humor. His incredible metal sculptures, experimentation with mixed media and found art, resemble something David Smith might approve of. Organic forms and fluid lines dominate Garret’s sculptures. There’s an unmistakable warmth about his work, one that artists working with metal rarely achieve, a warmth mirrored by the man himself. “That initial human response is what I’m most interested in about art,” Garrett told me when we last spoke. 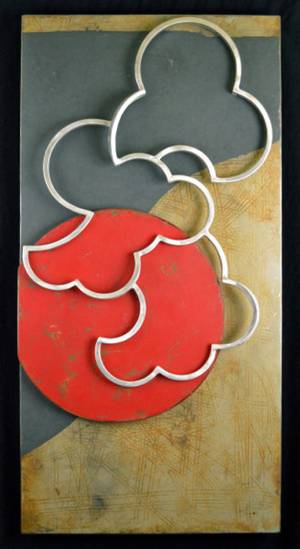 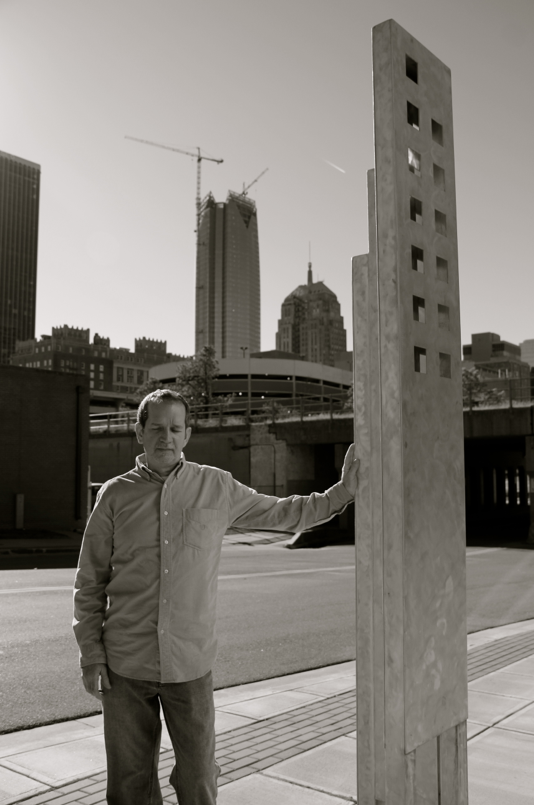 Â Dan Garrett stands in front of his sculpture, permanently located in front of Artspace at Untitled. Photo by Helen Grant.

Garrett is not a formally trained sculptor, instead he drew inspiration from his background as a welder and mechanic. He’s refreshingly open when speaking about his art, and there’s no sense of pretense. Garrett didn’t even start making pieces with an intent to show off his work or become known. His wife, also an artist, inspired him to start using his welding background as a creative outlet. His talent is undeniable, and he has the respect of many of his colleagues in the art community. Jon Burris, the executive director of [Art Space] at Untitled, a non-profit art center in Bricktown, speaks highly of Garrett, saying that he is one of the few sculptors in the region who does truly innovative work. If you want to see the man’s art in person, you can go and see one of my favorite Dan Garrett public art pieces on the way home from work today. This welded sculpture stands in front of the Untitled building, located at 1 NE 3rd Street, on the far north end of Bricktown.Â When I see the piece, a tall, sleek silver sculpture meant to emulate a city skyline, I can’t help but think of the idealized city portrayed at the opening of Fritz Lang’s Metropolis.

Oklahoma City is in a state of “becoming” right now, as capital and people flee the coasts seeking safer ports. As Oklahoma City has strengthened economically, there has been an explosion of art and culture within the city- less formal, more experimental, playful and sincere. Dan Garrett is among the artists at the forefront of this new school of local artists, and his work bodes well for the future of art in the metro area. 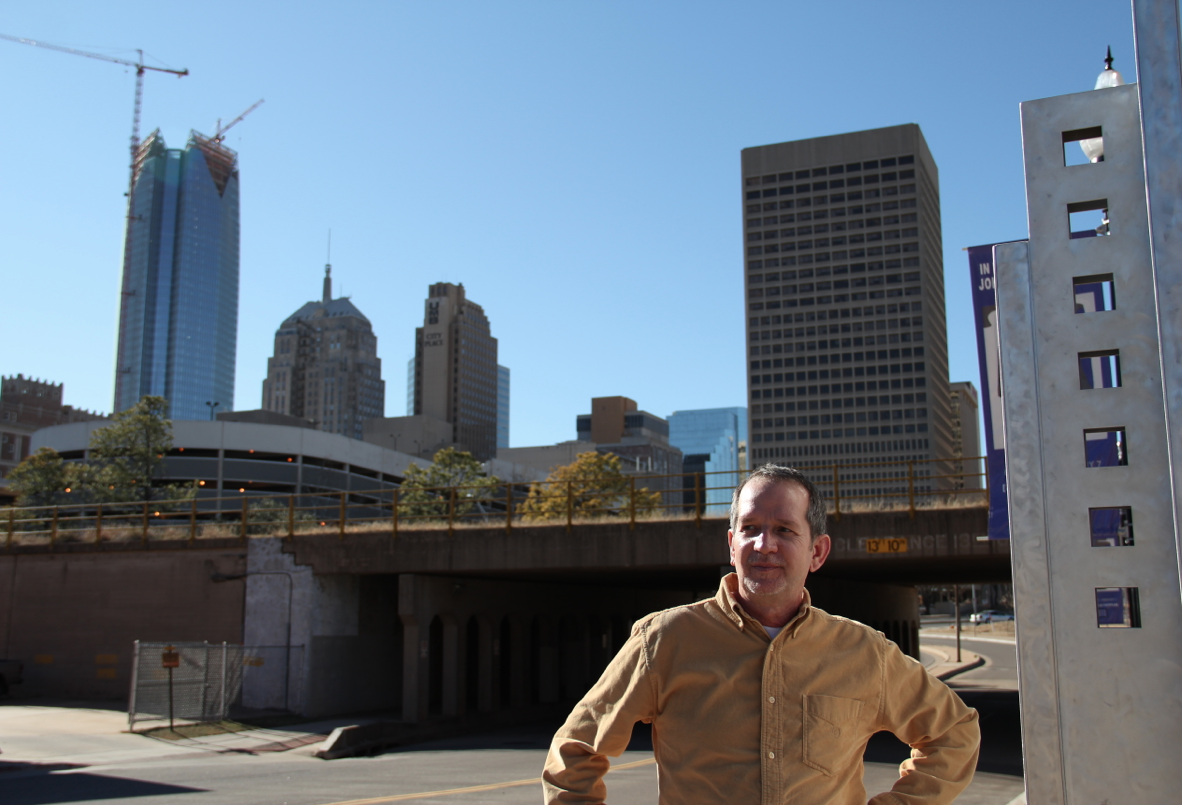