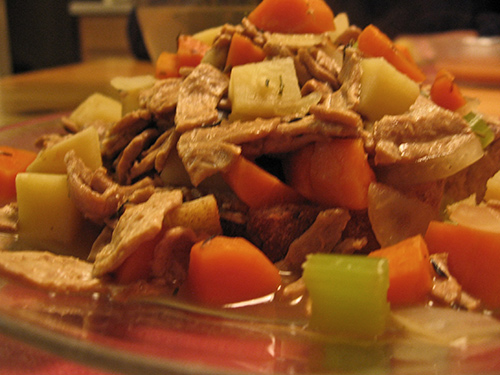 January is the perfect time of year for making soup. Itâ€™s hard to be bitter about the cold winds and low temps when you are inhaling the spirals of steam coming off a hot bowl of soup. A simmering pot of soup warms the kitchen, and fills the whole house with wonderful smells. If thatâ€™s not enough reason to get your soup on, soups often have immune-boosting ingredients and they make the belly feel fuller longer â€“ for those people who have not yet given up on their New Yearâ€™s resolution to lose a few pounds.

Making soup is also a great way to clean out the refrigerator and use up leftovers. Cooked grains and vegetables can be simmered in broth with a few herbs and spices to make a quick and tasty meal. If the fridge is full of veggies that are far past their prime, most any vegetable â€“ even carrot ends and onion skins â€“ can be boiled for an hour or two in water, to make a low-sodium vegetable stock. An endless variety of soups can be created from ingredients that are probably already in the kitchen. To encourage other to get their stockpot out, Iâ€™ve listed some of my favorite soup and stew recipes below. All of these recipes are vegan, but they should be hearty enough for any hungry soup-eater. Serve with a green salad and some crusty bread for a complete meal.

Seitan is a Japanese food made from protein extracted from wheat flour. Also known as â€œwheatmeat,â€ it has a chewy â€œmeatyâ€ texture and can be seasoned to mimic different types of meat, or enjoyed in its traditional form, seasoned with soy sauce and ginger. It is available commercially at health food stores, or you can make your own. One batch of the Homemade Seitan from the Post Punk Kitchen website works perfectly in this recipe, and you can save the simmering broth for use in the stew.

Chop the seitan into bite-sized pieces. Fry in about one tablespoon of oil over medium heat in a large soup pot until browned on most sides. Set aside.

In the pot, fry onions in one to two tablespoons of oil until it starts to brown. Add celery and carrot and sautÃ© for three more minutes. Add potatoes, fried seitan, broth, wine, rosemary and bay leaves. Cover and let simmer for about 20 minutes, or until potatoes are soft. Add salt if necessary.

For a thicker stew, whisk two to four tablespoons of flour into Â½ cup of water or broth and stir into soup. Let simmer five minutes longer. Eat with biscuits. Makes four to six servings.

This soup is hot hot and spicy hot. The onions, garlic and red chili flakes should also help keep the sniffles away. Any kind of firm cubed tofu can be used â€“ fried, baked or raw. Bonus points for using local tofu!

In a large soup pot, sautÃ© the onion in the oil over medium heat, until onion is soft and translucent.

Add remaining ingredients except for salt and pepper.

Cover and bring to a boil over high heat, then reduce heat to low and let simmer for about 20 minutes, or until the cabbage and carrots are soft.

Add salt and a generous shake of fresh pepper to taste. Serves six.

This delicious soup has such amazing warming abilities that they serve it at the McMurdo Naval Base on Ross Island in Antarctica. It also has a cheerful bright orange color, which makes a nice contrast to gray weather.

In a large pot, fry onion and ginger in oil over medium heat until onion is translucent. Add carrots and water and cover. Turn the heat up to high until it boils, then reduce heat to low. Simmer for about 20 minutes, or until carrots are soft. PurÃ©e using an immersion blender if available, or let cool and purÃ©e in batches in a food processor or blender. Return to the stove, over medium-low heat. Add coconut milk, lime juice, brown sugar and red chili powder. Taste and adjust salt as desired. Serve once the soup is hot, but avoid boiling. Makes six servings.