Oscar Ameringer is one of the great nearly forgotten voices of Oklahoma history. Ameringer was one of the leading lights of the Oklahoma Socialist Party, a newspaper editor, a political activist and organizer, a crusader against the KKK, was very nearly elected mayor of Oklahoma City, and was indicted for sedition for writing an insufficiently patriotic poem during the First World War. His writings are still readable and relevant. To prevent them from falling into the memory hole, I have started collecting his editorials from his several newspapers (The Oklahoma Daily Leader, The Illinois Miner, and The American Guardian) and will reprint them here from time to time. In this column from 1921, he reflects on the aftermath and uncertain future of the Russian Revolution. In this time of global revolution, it’s well worth a read. – ed 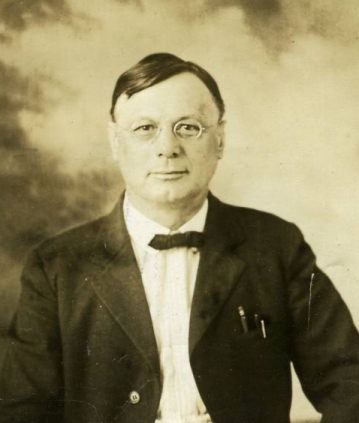 The other day, a friend comes to me and says “Oscar, are you in favor of revolution?”

This reminds me that the last earthquake which raised so much cain in Japan did not even ask the Mikado for permission to quake. That’s the trouble with earthquakes in general. They pay no more attention to great men than to telephone girls and house cats. Of course, earthquakes are not always as black as painted. If properly conducted, they can even do a heap of good. For instance, it was earthquakes which scooped out the ocean. Nobody will deny that the ocean is a wonderful boon to navigation. It is the same thing with revolutions. Some of them have done a great deal of good.

As for saying to a revolution “Come here quick!” or “Get to ‘ell out of here!” or “Come on now and be a nice revolution!,” it can’t be done. It all comes about because earthquakes and revolutions are eruptions, and nobody but a downright fool would argue with an eruption. The former are caused by the fire on the inside of earth and the latter are caused by the fire on the inside of men. When the pressure from the inside becomes too much for the outside shell of rock or rock ribbed standpatism, then something has got to crack, and by a strange coincidence it is invariably the rottenest piece of the shell.

One of the belated revolutions hit Rome so long ago that even the date is lost in antiquity. From what I’ve heard, it was caused by nothing more serious than starvation. The Romans had conquered the world with legions of small farm owners, but after awhile the little clodhoppers themselves were out catching farm hands for their generals. The ex-service men came home from the crusades and settled the large cities, where they hung around sponging free lunches and circus tickets while waiting for the bonus that never came. It finally got so bad in Rome that, between landless farmers and land, most folks got out of the habit of eating. This naturally made them a little irritable. They fell to each other’s throats, and during the excitement vandals and barbarians (as our noble ancestors were called in those days) swooped down on them and kicked their rotten playhouse into the Tiber.

One of the rottenest spots in the history of our fool race was France of ancient regime. While crown and clergy were wallowing from one debauchery to the other, the farmers were starving by the tens of thousands. The nobility and clergy owned all land and spent all the money, while the peasants did all the work and paid the taxes for the support of rulers who were nothing but garbage cans on legs. Of course, when the revolution came, a great many of the fine ladies and gentlemen who were responsible for the upheaval lost their property along with their fool heads. Some of this brainless and heartless outfit managed to flee into Germany, England, Austria, and Russia, where they preached a holy crusade against the Jacobins and Atheists of France – as Bolsheviks were termed in those days. In due time the Holy Alliance was organized, and the boneheads by the will of God and of Prussia, Russia, Austria, and England drove their beggared subjects into France to make the world safe for throne and altar, (meaning thereby the titled and mitred parasites who were devouring the very entrails of their people.)

The Holy Crusade for throne and alter got stuck in the mud because the revolution found a defendant in the person an obscure little corporal who became famous as Napoleon Bonaparte. For nearly twenty years he drove a blood smeared plow over the fields of Europe and the youth of France followed until it died, whiskered and wrinkled on the night of Waterloo.

There is no need explaining the causes of the Russian revolution. Read the history of France of the 18th century and you have the history of Russia in the 19th and 20th centuries, clear to the minutest details including the deluge, the horde of emigres who are clamoring for intervention in the capitals of other nations, the fool statesmen who intervene, and finally the cry against the recognition of the newcomer.

Verily the man who said history repeats itself said a mouthful. The pity is that he addressed his remarks to boneheads, for it seems that our educators see in history little more than a collection of fairy tales concerning deeds of legendary saints and devils. A few weak mortals whom the force of eruption has thrown on top of the wreckage are made responsible for the upheaval itself. We pick our LaFayettes, Robespierres, Kerenskies, and Lenins out of the ruin and paint them devil black or angel white in accordance with our notions, interests, and prejudices, and call it history. We do not search the silent depths in which revolutions gather their forces for the day of reckoning. The poor devil who thinks he can make a revolution by mere talk is as big a fool as the scared politician who believes that revolution can be pushed through keyholes.

For the pacification of both of them, let me say that there will be no revolution in this great democracy until the overwhelming majority of our farmers are reduced to landless serfs and until the mass of our wage workers have been degraded to starving helots. If the rising farmer labor movement succeeds in preventing the pauperization of the producers of this country, the revolution is doomed. On the other hand, if the open shoppers and radical eaters are successful, the revolution will get them some day, as sure as God made little apples. And when it does come it will not be imported from without; it will come from the inside, because there never was an eruption yet that did not originate either in the bowels of mother earth or in the bowels of man.

Knowing these things, I wish they would quit kicking my revolutionary friends around. I’m a romantic cuss. Nothing does my heart more good than to read hair raising tales about dragon killers and Grail hunters. The boys who sign themselves “Yours for the revolution” are the last survivors of that noble tribe. If they are made to shut up, the world will be as romantic as a whitewashed coal shed back of Main Street in Gopher Prairie. Besides, it don’t do a bit of good to persecute dreamers. They get fat on it. The blood of the martyrs has ever been the seed of that faith. Nero fed the communists of his time to lions and lost his life. Constantine invited them to his table and turned their churches into recruiting offices for his legions.

Yes, history is a great science, but awfully lonesome.