This is one of a series of short essays where our writers answered the question “what do you love/hate about the holidays and this time of year?” 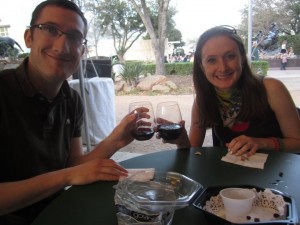 Being ridiculous with Mary at the Houston Rodeo Wine Garden, circa 2011

My sister would have been a great English major. Mary’s two years older than I am, as well as smart, funny, and articulate. She would have killed in a degree program where you have to write cogently about your thoughts and analyze literary or cultural “texts”; I can see her dropping Foucault and Steinem references with the best of them. Mary’s not an English major, of course; she has a degree in chemical engineering and currently works in Houston for Exxon-Mobil (which, for the record, means she is probably way more successful than most 26-year-olds with bachelor’s degrees in English).

For as long as I can remember, Mary and I have always watched the same television shows. We grew up watching old reruns of “Saved By the Bell” and “The Fresh Prince of Bel-Air” after school; every summer, we spent hours watching episodes of “Saturday Night Live” from years past and “Pop-Up Video” on VH-1. We both have an incredible, almost inexplicable ability to recall pop culture ephemera and obscurities from before we were born.

Very little has changed in that regard as we’ve become adults. Every week or two, one of us will call the other, and we’ll talk for around an hour about the sitcom lineup NBC has on Thursday nights, movies, and whatever books we’ve been reading. Our conversations are always ludicrous and fantastic; we’ll parse through “Community” and its meta-narratives, the differences in portrayals of women in “The Office” and “Parks and Recreation”, and get way, way too deep into what makes these shows tick. Over the summer, I read Stieg Larsson’s shockingly dark series of books at Mary’s recommendation, and over the course of the 10 or so days when I read them, we would exchange upwards of 70 texts back and forth daily about whatever Mikael and Lisbeth were up to. Mary would have been a great English major; she’s able to talk about sitcoms and Hollywood gossip with way more intelligence and thoughtfulness than half the people in my classes are able to talk about course materials.

At some point, though, as we got older, she discovered math and science, and put her interests into more practical pastimes than knowing all four members of the Ghostbusters’ last names (Spengler, Stantz, Venkman, and Zeddemore. By the way, I did not have to Google that). Maybe she grew out of crap like that. The thing is, I never did. I suppose that’s why I became an English major, where I’ve learned how to analyze (read: bullshit about) so many topics with so much vibrancy and enthusiasm.

As I said before, Mary works in Houston, and the only opportunities I really get to see her are at Christmas or over the summer. The summer trips are great, but I really love when she comes to Oklahoma for Christmas. We spend the days leading up to Christmas watching holiday specials and being generally ridiculous with each other and our close friends Jeff and Laura. Being with her at Christmas brings back faint glimpses of my past, fragments of my life as a child; one of my earliest memories is Mary waking me up at 4 a.m. on Christmas morning because Santa had come and left us toys. I was maybe 3 or 4, my best guess, and I don’t remember anything else about that Christmas except Mary’s freckled face and her toothy, ecstatic grin as she woke me up at an ungodly hour because Santa came. These are some of the things I think about this time of year, some of the things I treasure. Sometimes when Mary and I are together, it seems like we’re still little; like grown-up things such as work and school and money haven’t eaten us up inside. Sometimes it still feels like she’s waking her younger brother up at 4 in the morning to see what Santa left. And that’s something I love about Christmas.