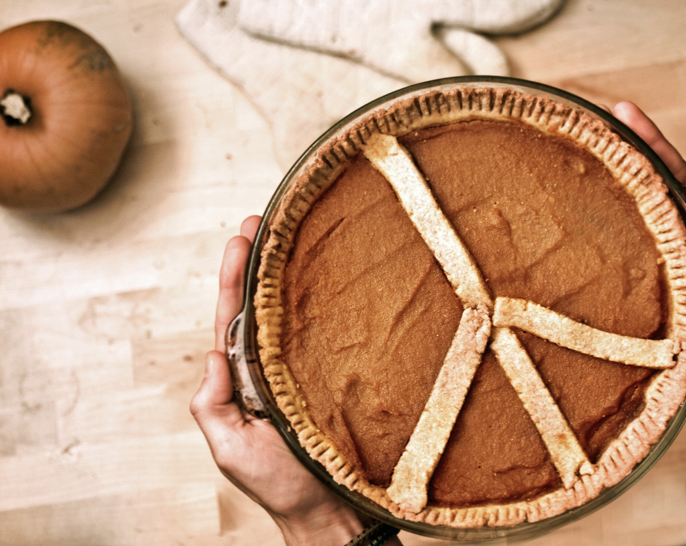 “Have a ‘Peace’ of Pie” Photo by Joel Robison.

Thanksgiving is a holiday that is not necessarily sensitive to those of us who identify as vegans. A holiday that centers around eating a giant roasted bird and watching men throw around a pigskin leaves little for the average vegan to enjoy. But this does not need to be the case! Embolden by recipes that have been tweaked to accommodate vegan ideals, anyone can transform a plain meal of side dishes into a veritable vegan feast. Honestly, even if vegans are dining with turkey-satiated omnivores, there are simple and delicious recipes that will appear right at home next to the main course.

If youâ€™re a vegan joining an omni family for a traditional Thanksgiving, you might consider bringing the Chikâ€™n Pot Pie recipe below. It goes along with the traditional turkey theme, which also includes the potatoes, vegetables, and gravy. Itâ€™s like Thanksgiving bundled up inside a flaky crust. Even if this is the only vegan thing on the table, it is rich and filling enough to tide any vegan over until they can get home. Use puff pastry from the grocery store freezer to save time and to make your Chik’N Pot Pie all the more golden and delicious. Youâ€™ll be fighting off Uncle Bob for the last slice!

Depending on how you look at, if youâ€™re lucky enough to be cooking your own vegan meal for yourself or others, or maybe you didn’t want to be stuck cooking this year at all but find you have to now, rest assured the following recipes will compliment the chikâ€™n pot pie recipe, and will score on all the checklists as to what constitutes a traditional dinner. Many of these recipes are also a bit healthier than their non-vegan counterparts, so should you decide to cut that larger than usual wedge of pie, there’s a little less worry about popping a button later down the line. All the recipes serve approximately four people, and may leave enough for a few leftovers.

For the crust, combine flour and salt in a large bowl. Cut the butter into the flour until mixture resembles fine crumbs. Add soymilk and mix with a fork until the dough forms a ball, adding more soymilk if necessary. Wrap in plastic and refrigerate for one hour. If using puff pastry, defrost according to the directions on the package. Grease a 10 inch pie plate, or an 8×8 inch pan. Preheat the oven to 400Â°F before assembling.

For the filling, heat 1 Tbs. oil in a frypan and cook the Chikâ€™N strips or seitan until it just starts to brown. Let cool, and cut into bite-sized pieces. Chop the remaining vegetables. In a large saucepan, melt the margarine over medium heat and fry the onion until translucent. Add celery and carrots and fry for 2-3 more minutes. Add the potato, peas, stock, and spices. Bring the pot to a boil and then reduce heat and simmer for about 5 minutes. Whisk the flour into the soymilk and add to the pot. Continue to simmer until the sauce thickens, adding more soymilk if the mixture looks dry. Fold in Chikâ€™N and pour into the greased pan.

Roll out the crust or puff pastry on a lightly-floured surface to match the shape of your greased pan. Place over the pan, tucking under the edges. Pierce the top of the pie crust with a fork. Bake for 20-25 minutes, until crust is crisp.

This velvety-smooth, slightly spicy soup makes a lovely first course on a cold Thanksgiving Day. Itâ€™s equally good for an Oklahoma Thanksgiving when itâ€™s 65 and sunny.

Peel the butternut squash with a vegetable peeler, scrape out the insides and chop into approximately 1 inch chunks. Heat the oil over medium heat in a large pot and fry the onion until it becomes translucent. Add the squash chunks and water, cover, and turn the heat to high. Once the water boils, turn the heat down to low and simmer for about 20 minutes, or until the squash can be easily pierced with a fork.Â  Remove from heat. If you are lucky enough to have an immersion blender, purÃ©e the soup in the pot until it is completely smooth, adding more water if necessary.Â  If you have a regular blender, let the soup cool until it is just warm (add some ice cubes if you are in a hurry), and purÃ©e it in batches. Return to the stove over medium-low heat. Add curry powder and salt and pepper to taste. Heat through and serve. Soup may be prepared the day (or two) before and reheated.

No one will know these are vegan as long as you remember to buy the unsweetened soymilk, instead of the vanilla flavored box!

Scrub potatoes with a vegetable scrubber if leaving the skins on, or peel if desired. Cut into large chunks and place into a pot. Cover with water. Heat the potatoes over high heat until it boils, then turn the heat down to medium-low and let simmer for about 20 minutes, or until potatoes are soft. Drain. Add margarine and a generous shake of season salt. Add Â¼ c. soymilk and begin mashing by hand, or use an electric beater, adding more soymilk (and margarine, if you want them richer) until you achieve a nice creamy consistency.

This recipe is adapted from Isa Chandra Moskowitzâ€™s Appetite for Reduction cookbook. It is a lower-fat gravy recipe, which sounds like an oxymoron, but I now prefer it to previous, creamier attempts at vegan gravy.

Heat oil and margarine in a medium saucepan over medium heat. SautÃ© onion and garlic until soft, about 5 minutes. Add spices and sautÃ© for 3 minutes more. In a small bowl or measuring cup, whisk the cornstarch into the vegetable broth while it is still cold. If you have a regular blender, puree the broth mixture with the chickpeas and the onions and garlic until smooth and return to the saucepan. If you have an immersion blender, add the chick peas and broth mixture to the onions and garlic, and puree in the pan until smooth. Either way, then you let it simmer over medium heat for about 10 minutes until the gravy thickens. Stir in soy sauce. Gravy may be thinned with water to reach desired consistency, and is ready for the boat.

Unless you are a vegan chef extraordinaire who is using Thanksgiving as your own personal vegan anti-defamation project, then go easy on yourself and buy a bag of dried stuffing (read the ingredients first, but the Pepperidge Farm brand is vegan at least.) Follow the directions on the back, substituting margarine for the butter, and water or vegetable broth for the chicken broth. Bake in a casserole dish. Have a glass of wine, and proceed to your next recipe.

Every Thanksgiving table should have something green, especially a vegan one. Use almonds in this recipe to prepare a traditional almondine, or do what I do and use pecans to make a â€œpecandine.â€ Either way it will be a tasty side dish.

Wash, de-string and snap green beans. Steam in a small pan until cooked, but still crisp. In a sautÃ© pan, melt the margarine over medium-low heat and fry the almonds until they are fragrant and begin to brown. Toss beans with the almonds and heat through. Sprinkle with a little salt and serve.

Iâ€™ve made this dessert many times, and I still canâ€™t believe itâ€™s vegan. Prepare it the day before so that it can firm up overnight in the fridge.

Preheat oven to 375 Â°F. Combine crust ingredients in a small bowl and pat evenly into a 9â€ pie plate.Â  Puree filling ingredients until smooth in a blender or food processor and pour over crust. Bake for 50 minutes. Pie will not appear to be â€œsetâ€ but take it out anyway. Let cool on the countertop, and then refrigerate overnight.

If these recipes donâ€™t intrigue your taste buds, then get clicking! There are a variety of websites with sumptuous vegan Thanksgiving menus. Thereâ€™s no reason that vegans should not share in a meal that makes them truly thankful this Turkey Day. Happy Thanksgiving!