(Editor’s Note: Also check out or story on hackneyed documentary genres, “10 kinds of documentaries we could do without” with examples and counterexamples from netflix instant)

Yesterday we brought you #10-6 of the most disquieting entries in the Netflix instant catalog; today we bring you the top 5. Once you see these movies, you cannot un-see them. Ready? OK. 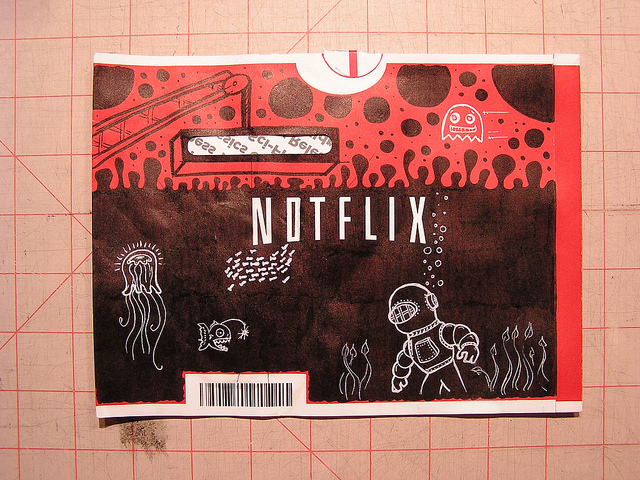 Iâ€™m sorry to do this to you, but I had to put this movie on the list. I tried to turn it off about six times. It made me cringe so hard. Iâ€™ve never seen a more painful movie, but it was entirely too compelling to stop watching. The title is taken from the song â€œI Think Weâ€™re Alone Nowâ€ originally written by Tommy Shondell, but made popular in the 80s by Tiffany.

Tiffany is the epicenter of this documentary, which describes the terrifying obsession of two Tiffany fans. Jeff Turner is a mentally disturbed 50-year old man whose repugnant mannerisms are thinly explained by his Aspergerâ€™s diagnosis. The second fan, Kelly McCormick is a tormented hermaphrodite with a voice that is garbled by a nasal whine. Jeffâ€™s bombastic attitude is grating. He calmly fabricates stories that Tiffany is his â€œbest friendâ€ and his â€œmentor.” Apparently, in Jeff’s world he and Tiffany are “in love” andÂ  Tiffanyâ€™s husband doesnâ€™t like Jeff because, in Jeff’s deluded opinion, the husband is “jealous”. Kelly is a desperate and lonely person who seems to be confused and mentally imbalanced. Their fixation eclipses all other facets of life. Neither of them seem to work or contribute to society in any way, but they both love Tiffany with a tireless and inexplicable passion.

The real brilliance lies in the objective filming format. There is no director commentary guiding your opinion, there is no clever editing to make the subjects look stupid. Presented in a non-judgmental void, the two fansâ€™ unpleasant obsession with Tiffany comes across as ghoulish and awful. Why wonâ€™t they just leave poor Tiffany alone? Jeff shows up at every one of her gigs and signing engagements. There is one completely hilarious scene where the zealously religious Jeff visits an â€œAdultâ€ convention Tiffany was a part of due to her Playboy spread in order to get his picture taken with her. He went back to his church group the following Sunday and reported on how everyone at the convention was so Christlike and good. The close-ups on the faces of the other members of the group as he spun his story that justified being at a tawdry convention made me laugh my ass off. There is also a bizarre confrontation between the Jeff and Kelly when they meet for the first time in Las Vegas which is totally worth watching the movie for.

The overriding question raised by this documentary is why in the hell did Tiffany let her restraining order against Jeff lapse? He had been stalking her for decades, sending her letters and calling her house. He even showed up once at a gig she had in order to present her with a gift: a ceremonial sword. I think a stalker showing up to your concert with a sword is reason enough to maintain a restraining order. Yet, in all these scenes where Jeff accosts Tiffany and oozes his brand of weird all over her, she tolerates it with barely masked and falsely pleasant contempt.

4.Â  Your Friends and Neighbors

Director Neil Lablute loves to create movies about unhealthy, toxic relationships and really fucked up people (In the Company of Men, anyone?). Your Friends and Neighbors is a film where Catherine Keener (Terri), Ben Stiller (Jerry), Aaron Eckhart (Barry) and Jason Patric (Cary) are all completely loathsome, selfish douchebags. Hereâ€™s the confusing synopsis: Terri is dating Jerry, but Jerry is secretly in love with Barryâ€™s wife Mary. [Jesus Christ, I just realized that all their names rhyme. Lablute, you sly dog]. Jerry and Barry have a best friend named Cary (Jason Patric) who is a totally unabashed misogynistic sociopath.

The film opens with an awkward sex scene between Terri and Jerry, which is intercut with Cary engaging in the most disturbing self-abuse Iâ€™ve ever seen. Everyoneâ€™s screwing around and having affairs and lying. Itâ€™s not for this reason that this movie is on the list. The reason is the steam room scene. Jerry, Barry and Cary often work out together, and about Â¾ through the film something unspeakably awful happens in the steam room. And, no, itâ€™s not at all what youâ€™re imagining. Basically, Jason Patric reveals his acting chops by being a reprehensibly and calmly evil individual. Patricâ€™s role in this movie is unique: Iâ€™ve never seen a character like Cary in any other film before, but Iâ€™m glad this character is singular. I never want to see a character like him in any other movie ever again.

People who get really into role-playing video games and Live Action Role Playing (LARPing), are usually considered to be weak-minded, wimpy, and nerdy â€“ theyâ€™d have to be in order to escape into the laughably elaborate fantasy worlds they become obsessed with. Films like Role Models have gently mocked those who take LARPing seriously, and one visit to 4Chan should scare you away from this lifestyle forever. What if LARPing was taken on in a serious way? What if the fantasy of LARPing became a bleak reality? This is a concept that is grappled with in The Wild Hunt.

The Wild Hunt made me terribly uncomfortable, like the time I read about a woman who had a condition that made her scratch a persistent phantom itch on her head until she reached her brain. A phantom itch seems funny. Dressing up like a warrior of Odin, wielding a hammer and running around the woods after fairies and elves seems equally funny. The reality of these things can prove, sometimes, to be seriously disturbing business.

The film centers on Erik Magnusson and his girlfriend Evelyn. Erikâ€™s brother Bjorn introduces Evelyn to the world of LARPing and she gets in deep. Her thrill at escaping into a fantasy world allowed her equally to escape from a stale life living with Erik and his ailing father. Evelyn leaves Erik to embark on a weekend long adventure in the woods, as the captured Princess of the Odin tribe. She desires her capture because it places her in a subservient position to the craven Shaman Murtagh who rules a beastly tribe of superstitious, bloodthirsty warriors. Her role that weekend is to take part in the mystical ceremony in which she would lead the warriors on the â€œwild huntâ€ which is a lusty pre-war dash in the woods by phantasmagoric huntsmen plundering everything in sight.

On the surface, this sounds like the plot to a situation comedy. Boy loses girl to LARPing nerds, boy goes after girl and has to enter and become one with the weird world she loves in order to understand her and win her back. Oh my god, no. That is not even close. Yeah, thatâ€™s the skeleton outline, but heartwarming and funny, this film is not. First of all, these guys take the business of role-playing serious to the point of becoming deranged. People die. Blood is shed. Revenge is taken. This film is fucked up, but beautifully shot and ultimately unforgettable. It is a chilling and harrowing glimpse at the propensity of human nature for evil when freed from the constraints of society and placed in the State of Nature.

This movie put me in a dismal mood for days. Itâ€™s my fault, however, for watching this movie on a day that a friend that I was close to in high school died very suddenly. His death clung to me like a gloomy, unshakeable cobweb all evening. For some reason, I decided to watch Last Night which is a film entirely about death â€“ namely, the death of all civilization. Last Night refers to humanityâ€™s last night on earth, and for that reason alone, it can be labeled psychologically distressing. Really, the most unsettling element here is that the film never explains the big â€œeventâ€ that has occurred to ensure the destruction of the world. Everyone knows the world is ending at midnight, though the reasons are never explained. This question constantly hovers at the periphery of the film, but is never answered.

Last Night looks closely at how different people react to the dire news of global annihilation. There are riots and orgies, there are family dinners and frantic attempts to get home. David Cronenberg appears in this film as the owner of a phone company. His Sisyphean and self-ascribed task of calling everyone in the city to assure them of continuing service until the time of the event is a frustrating, stark exercise in futility and denial. Sandra Oh, in one of her first roles, captivates the dread of death as she rushes home to be with her husband, only to be derailed from being with him. Don McKellar, the writer and director of this film, plays Patrick, a depressed widower who escapes the doldrums of a fake Christmas dinner with his family to go home alone. Patrickâ€™s best friend, Craig (played by Callum Keith Rennie) is on a singular mission to indulge in every sexual proclivity heâ€™s ever had in his life. Craig invites Patrick over for what becomes a very awkward request. Patrick quickly takes leave of Craig, and it is on his journey back to comforting solitude that brings Sandra Oh across his path.

This film is persistent about the fact that the world is ending: a rail thin woman jogs around the city shouting to all in earshot the countdown on the hour as the sun grows brighter in the sky serving as a bizarre environmental reminder that something is horribly and inexplicably awry.

This film is considered by critics to be one of the Top 10 Canadian films of all time â€“ and with stiff competition from fellow Canadians like David Cronenberg, Atom Egoyan and James Cameron, you can bet this filmâ€™s reputation is well-earned.

I grew up on a steady diet of weird movies, starting at an early age with zombie films, horror films, and the bizarro cult films manufactured by the likes of Ed Wood and Kenneth Anger. Because of this, I watched Human Centipede with almost no reaction. It’s been a long and successful road toward desensitization, that is, until I saw Dogtooth. I can easily, categorically pronounce it this most disturbing movie I have ever seen. It got to me so badly, that I can’t stop thinking about it, though I really, really should.

I cannot describe this movie without giving too much away. Here’s the surface: This Greek film was nominated for an Oscar in 2009. It’s foreign. It’s set in a stark and beautiful home in an unpopulated area of Greece. It concerns an isolated family, controlled by a domineering father figure.

The first five minutes are somewhat strange, and then the movie swerves into some of the most jawdropping scenes I have ever witnessed. I was basically agape during the movie, and more than once turned in wide-eyed horror to my boyfriend and just asked, “Why?!” It’s not gross. It’s simply unshakeable, enervating…and original. You’ve never seen anything like Dogtooth before, and hopefully you never will again. Do I recommend it? Absolutely. Because no matter how goddamn disturbing it is, it’s really good. Ignore the synopsis on Netflix. It really bears no relevance to the true plot of this film.

NEXT WEEK: Grace will recommend the 10 best body washes and mild abrasives to scour off the vague unclean feeling you will have after seeing any of these films. Happy Halloween!