(Bummed out about all the negativity? Try out 20 Documentaries Everyone Should See, Pt 1)

I’m a big fan of documentaries. I especially enjoy social and cultural documentaries. They can’t all be winners though. And as I see more of them, I have begun to witness a few themes that are, well, over done. Stale. Silly. Pretentious. Insulting. Not all films in these subgenres are any of those things (I have tried to give at least one example in each category of a film that fits the description and is actually kinda good) but enough of them are to be worthy of note.

So, without further ado, here is my list. All of the films I mention are available for streaming on Netflix Instant.

What the filmmakers think they are saying: â€œNYC is a city of epic contrasts, indelible joy, and crushing sorrow. These years spent living in Park Slope have been the best of my life, and I want to document that.â€

What the filmmakers are actually saying: â€œHey, look at my awesome life!â€

Part of what’s magical about film documentaries is how they make the specific details about someone’s life feel universal. But documentaries cannot survive on local quirk alone. If the point of your movie is to say nothing more than â€œhey, look at this cool place!â€, then I think what you have is a recipe for a vapid and shallow documentary.

About a famous greasy spoon in the east village. An example of how “slice of life” can work in a film.

Instead of this one:

About how Yoga helped NYC heal after 9/11. Seriously. 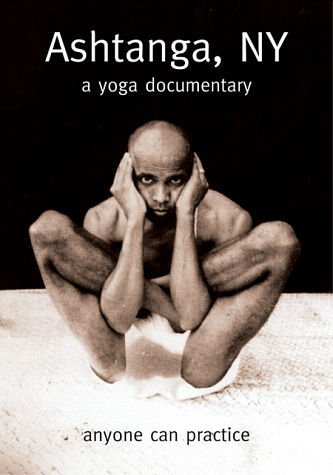 Clearly this is not pretentious at all.

What the filmmakers think they are saying: â€œAll people have dignity and potential, and the current social system is doing nothing for so many of us. Perhaps this film will be the single point of light that shines in the darkness.â€

What the filmmakers are actually saying: â€œGee it’s hard for these kids! We should help them somehow if it’s politically expedient!â€ 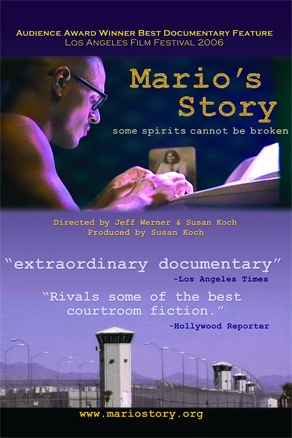 Whoa, a typewriter in prison?

This genre is particularly irksome, because it typically focuses on young non-white kids learning to appreciate the same things that middle-aged white people like. It typically treats it’s subjects like curiosities. A black kid doing ballet is treated like a bear on a unicycle. All of this is wrapped around a usually vague and ham fisted political argument. If you want to change things, get specific, get active, or STFU.

Â All of these movies are pretty bad:

Latino youth learns about writing while in prison. Heroic white people work on his behalf.

Heroic principal sets ethnic youth on a course for success. Ok, what really happens is you see a principal yelling at teenagers for two hours, a swell of music announces the end, and you’re like, “Well, I guess that worked?”

And a special jury prize for achievement in white savior complex cinema:

The Art Star and the Sudanese Twins

A conceptual artist fights to be the first person to adopt out of the new nation of South Sudan. Not everyone is thrilled. The documentary is unfailingly fawning and sycophantic.

3. â€œHey! Look at this crazy subculture!â€

What the filmmakers think they are saying: â€œWe can use this strange subculture to really get at something universal about human nature.â€

What the filmmakers are actually saying: â€œHey, Trekkies made money, so let’s make Trekkies 2!â€

I’m a certified nerd. This much is undeniable. Does that mean I want to watch 90 minutes about people who love Dr. Who? No. If I want to hear all about Dr. Who fandom, I can either call someone I know, or look it up on the Internet like a normal person.

Trekkies had a spark. Trekkies 2 was a little too much. All the imitations are way too much.

Dr. Who sure has some crazy fans!

Indiana Jones sure has some crazy fans! 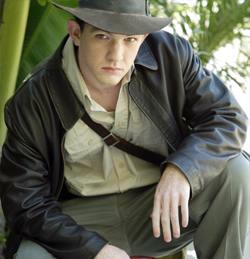 What the filmmakers think they’re saying: â€œAmerica is such a land of unique characters, let’s peek into their lives for just a minute and see what it tells us about ourselvesâ€

What the filmmakers are actually saying: â€œBest spring break ever, bro.â€

This generally involves someone seeking to â€œLook for America,â€ to quote the Paul Simon song, often on a trip to â€œall the lower 48 states,” because getting to Hawaii and Alaska isn’t in the budget. What it actually means is you get to watch some obnoxious hipster’s vacation videos. Extra points for every Wacky Character and stereotypical regional accent that is gently mocked.

2 guys quit their jobs and ride Segway scooters across America. Yep, it’s exactly what it sounds like.

Remember MTV’s Road Rules? What if they made that into a ploddingly slow docu-melodrama with some sort of vague philosophical point to make? You would get this movie.

We are the world. We are the children. Time to make the world a better place, so let’s start going on field trips into the lives of poor people with our cameras. 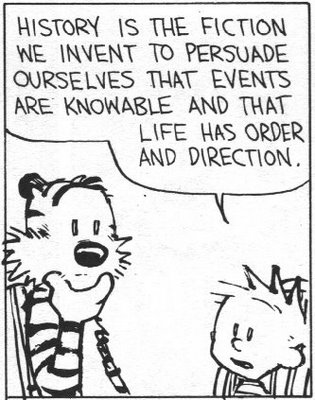 A far more profound take on the human experience. You're welcome.

5. â€œWhat’s Destroying The Earth This Time?â€

What the filmmakers think they are saying: â€œOnly immediate action can save our beautiful blue marble.â€

What the filmmakers are actually saying: â€œDespite the fact that the vast majority of environmental damage is caused by post industrial waste and can only be reversed by concerted effort on the part of governments and industry, saving the biosphere is your personal responsibility.â€

I suffer from outrage fatigue. I get bent out of shape so easily and so frequently when faced with the less than ideal state of the world that I just can’t handle the plight of the honeybees right now. I just can’t deal with it. I’m glad other people care. I’m glad that those other, better, smarter people are working on it.

Save the Dirt! Before it’s too late!

Dirt is apparently kind of awesome. Alright, if you want to watch a slow ass movie about people waxing philosophical on the life of microbes, this is your movie.

Save the Bees! Before it’s too late!

Queen of the Sun: What are the Bees Telling Us?

I think the bees are telling us: “more pollen, plz. kthxbye.” 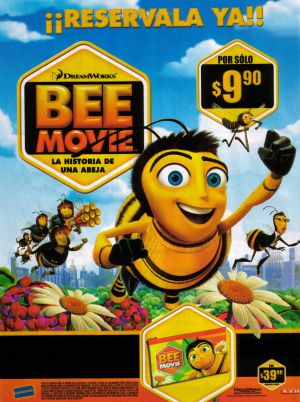 All kids love the wry observational humor of Jerry Seinfeld.

What the filmmakers think they are saying: â€œThe truth is out there, people.â€

What the filmmakers are actually saying: â€œHey, listen to this crazy unsubstantiated shit a guy told me!â€

Everyone loves a good myth, and plenty of these films are entertaining as hell, if only because they’re so out there. You have to constantly maintain a bit of critical distance because the documentary form is so powerful that you are forced to accept the viewpoint of the documentarian to a certain extent. The best of these are made by either skeptical outsiders or true believers. The worst are made by cynical opportunists exploiting harmless cranks for a cheap dollar.

What the Bleep Do We Know?

We know that this movie sucks big fat bleepty bleep. It purports to be a documentary about quantum physics, but is actually a propaganda piece for the followers of Ramtha, the ageless celestial entity that speaks through some lady in Oregon. I’m not making that up. Unlike most of the “science” in this film.

The real tragedy here is that you will never get these 55 minutes back.

Some guys revisit an urban myth from their hometown, and then shit gets real. Could be terrible, but isn’t.

Not at all good:

Eyes of the Mothman

THE REAL STORY behind THE MOTHMAN. If that sounds awesome to you, you should watch it. You will get exactly what you expect. 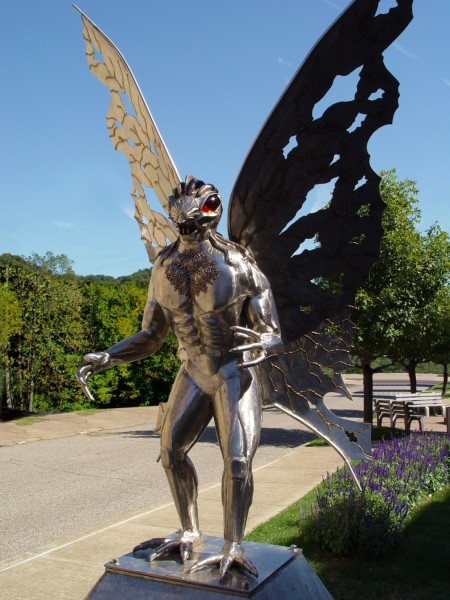 What the filmmakers think they are saying: â€œWhat an amazing time in America, when the change in economic relationships finally was reflected in changing social relationships.â€

What the filmmakers are actually saying: â€œBaby Boomers are awesome, and we like to hear ourselves talk!â€

It’s easy to believe from popular media that everyone was â€œdown with the struggle.” Plenty of deeply conservative people have described themselves in my presence as â€œan old hippie.” I don’t have proof, but I think way more people voted for Nixon back then than will own up to it now. He got elected twice after all.

Chelsea on the Rocks

Over it. Did you know it’s super expensive to live there now? THANKS, RUDY!

Berkeley in the Sixties

I think Berkeley is still sorta like this, just without any push back from The Man.

What the filmmakers think they are saying: â€œHere is a well constructed video essay about why you should agree with me about this political issue.â€

This is all Michael Moore’s fault. I love “Roger and Me“, and I enjoyed “Bowling for Columbine,” but it should be understood that these aren’t documentaries. They are polemics. And because of this, it’s hard to make a good one, or even a watchable one. Most of them are profoundly shallow and unfair. Unfortunately, there are also a ton of them, because all you really have to do is have an opinion and find some academics who will talk about it with you on camera. Then you just cut it together with some file footage and maybe an audacious stunt before calling it a day.

Science teachers who don’t want to teach science get fired sometimes. Kind of like how if I was a college professor and I wanted to teach an alternative set of grammar rules for American English, actually, you could probably get away with that. You would probably need tenure, though.

It’s a 124-minute movie that essentially functions like one of those shrill liberal blogs that deconstructs conservative language. And oh, hey, look it’s American actor and political activist Sean Penn! 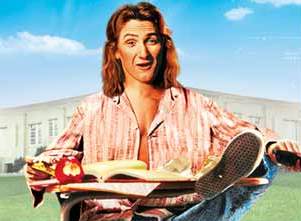 So much better than I Am Sam.

What the filmmakers think they are saying: â€œThe wisdom of everyday people never ceases to amaze me.â€

What the filmmakers are actually saying: â€œI’m amazed that other people have thoughts.â€

This is the â€œGood Will Huntingâ€ trope; we’re all actually brilliant! Even people you wouldn’t expect! The problem is that in making this point, the filmmakers reveal the people that they think are unlikely sources of wisdom, almost always working class people and people on the margins of society. It’s more than a little exploitative.

The inspiring story of janitors at top universities. What was I just saying about the Good Will Hunting trope?

It’s about parking lot attendants. Manages to avoid talking down to the audience or ridiculing the subjects.

What the filmmakers think they are saying: â€œWhat an interesting study of diverse family dynamics.â€

What the filmmakers are actually saying: â€œI bet people would pay money to watch these fuck-ups!â€

The difference between a good film in this genre and a bad one is empathy. If the subjects are played chiefly for laughs, it’s basically the ethical equivalent of watching Maury, but with the added stink of hipster irony. I would like to say that such films are the exception. I would be wrong.

The Wild and Wonderful Whites of West Virginia

Hey, let’s laugh at some poor people with substance abuse problems as their children suffer from neglect. Yay, finally a movie that gives us permission to enjoy watching the cycle of dysfunction repeat itself.

Doesn’t Live Up To Potential:

The story of the crazy dude who escaped the Nazis and created a semi famous brand of holistic peppermint soap with labels covered in philosophical ramblings and Bible verses. It seems like it would be interesting, right? Prepare to be surprised. 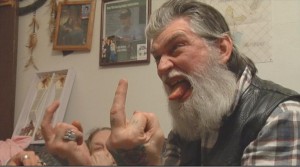 Â This is so depressing. Jesco White from the Wild and Wonderful Whites of West Virgina.

24 comments to “10 Types of Documentaries We Can Live Without”