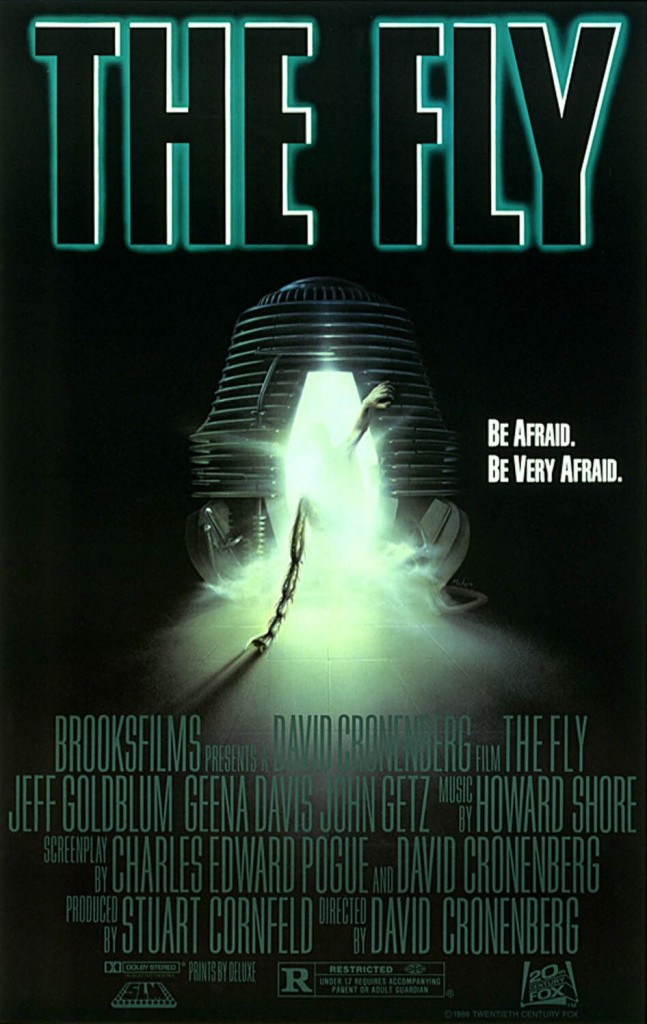 “Nobody ever said art had to be in good taste.”–Roger Ebert

I love horror movies. When people hear that, they usually want to know my favorite ones. But people don’t normally phrase it like that; they usually ask which I think are scariest. Full disclosure: I don’t really find most horror movies scary. There are certainly films that have given me nightmares, films that have upset or disturbed me; but I find myself ambivalent about the concept of being “scared” by most horror. I know that good art should elicit an emotional response, but still, I don’t like admitting to being scared by anything, especially not something that’s normally associated with guys in masks killing teenagers. Not to completely dismiss an entire sub-genre, but get real. This Halloween, as an alternative to watching a movie about a guy in a mask, go for broke and watch something genuinely upsetting. I dare anyone to watch David Cronenberg’s gut-wrenching “The Fly” (1986) and not feel sick. I further dare anyone to not feel a sense of tragic hopelessness after watching the film, when considering it is about a man stricken with an incurable decaying body, and that it was released in the cultural context of the mid-1980’s- the height of the AIDS crisis in the US. “The Fly” is an incredible film; it is without a doubt well-crafted, interesting, moving, and intelligent. But it is also disgusting, and offers a fairly awful viewing experience. Perhaps the best thing that can be said about it (which can be extended to countless other horror films) is that it is a film you appreciate, but not a film you enjoy.

I can’t say with any degree of certainty why I love horror films. But I do. I really, really do. If I had to speculate, I would say my interest in horror lies somewhere in between two poles: an intellectual interest in the subversive, in the taboo, and a much baser, almost gleeful curiosity. I find myself thrilled by the geek-show aspect of horror, the Grand Guignol, the over-the-top; the chunky, glistening gore, and overwrought attempts at terror. Cronenberg’s “The Fly” perhaps best embodies this polar sentiment; it contains both a profound textual meaning and a full-fledged commitment to turning your stomach. Likewise, George A. Romero’s seminal “Dawn of the Dead” (1978) is another one of my favorites; incidentally, it has become the standard by which all other zombie movies must inevitably be judged. A film that is both bleak and darkly humorous, “Dawn of the Dead” offers a satiric commentary on consumerism alongside what was at the time of its release an unprecedented level of gore and graphic violence.

Probably the best-known example of this polarity, though, would be William Friedkin’s “The Exorcist” (1973), billed (not incorrectly) as “the scariest movie of all time”. It is a deeply spiritual film which deals with theological questions cogently, including the nature of faith and belief. It also makes very real the concepts of Heaven and Hell, awakening a sense of existential dread in any viewers raised in the Judeo-Christian tradition. Uniquely, it does this while also showing projectile vomiting, shocking violence, and a particularly blasphemous act with a crucifix.

The most fascinating thing about horror for me, though, is that it gives voice to the fears of each generation, and the ways in which they manifest. Art is a function of the larger culture it exists within and comments on, and, taken in this way, horror films can be one of the most elucidating cultural artifacts of any given generation. Take “The Exorcist”, in which a priest’s faith in a loving and omnipotent God is shaken. Then consider that it was released in the early 1970’s, in the wake of one of the most tumultuous decades of the twentieth century, when the United States was mired in an unpopular and morally ambiguous war in Vietnam, a strong counter-culture movement led to the changing of cultural mores regarding drug use and sexuality, and the country mourned the assassination of its young, handsome president. At its most fundamental level, “The Exorcist” poses the question, “where is God? And if He’s out there somewhere, why does He let things like this happen?” In “Dawn of the Dead”, George A. Romero showed a generation who grew up in the shadow of the mushroom cloud what happens after the end of the world, and it was chilling. “The Fly”, as I said before, came out in the midst of widespread confusion and anxiety about AIDS and its transmission.

I’m much more interested in the second category, the “found footage” subgenre, epitomized in the mainstream by “The Blair Witch Project” (1999) and “Paranormal Activity” (2007). While “Cannibal Holocaust” (1980) predates these films by twenty years, I would not include it with them in this discussion, as it deals with completely different themes in a completely different (and morally reprehensible) way. What “The Blair Witch Project” and “Paranormal Activity” are interested in is the idea that, in the current world of connectivity and globalization, when every millisecond of every moment can be documented and classified, there are still things that exist outside this logical framework, things that escape being put into neat little boxes with labels and file names. They suggest that spirits still walk among us, and, if the time is right, can be glimpsed by a lucky (or unlucky) few.

At its core, that’s what horror does that no other genre can: it shows us another world. It is not the comforting, mythic world of fantasy, or the mind-bending world of science fiction, though; horror shows us a world we’re not always sure we want to know exists. Horror is a celebration of this other world, a world which delights and revolts us, but above all fascinates us. Horror reminds us that we don’t always have control over our world, that we won’t always understand the things that happen or why they do. And that scares us.