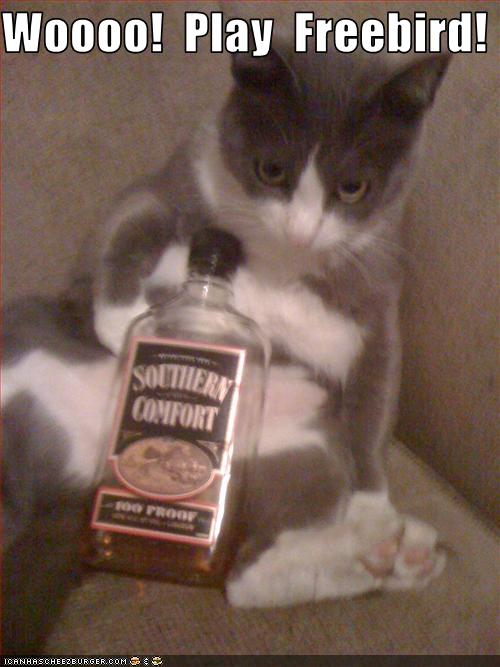 I can has high point liquor?

Undoubtedly, it must be a Law with a capital “L”, for no state (precluding any that once flew a Confederate flag) would write this into their legal code, but a Law of Nature (or Science)…something like the Law of Gravity. It is some undeniable force, a universal and invariable fact of the physical universe. “At some point at every live show, someone will, ironically or otherwise, vocalize a request for the Lynryd Skynyrd song, ‘Freebird’. The volume of this request will be equally proportional to the lack of sobriety of the individual making it.”

As unlikely as it is that someone might be unfamiliar with this song, I will gladly inform that small minority of deaf shut-ins that “Freebird” (variation in spelling, “Free Bird”) featured on the debut album of the southern rock band, Lynryd Skynryd in 1973. It is considered by most the band’s signature tune and has been since its release and certainly since October 20, 1977 when the band’s plane crashed in Gillsburg, Mississippi. The plane crash killed Ronnie Van Zant (lead singer), Steve Gaines (guitarist), and his sister, Cassie Gaines (vocalist). The influential tune can run well over 14 minutes long and made number 191 in “Rolling Stone’s 500 Greatest Songs of All Time”.

“We like to call ours ‘Southern Raunchy Roll’” Ronnie Van Zant described the sound of his band, Lynyrd Skynrd. “The other bands are just as bad but we go to jail more”. Van Zant and the band thrived on this outlaw image and have been canonized as the patron saints of the South. “We’re kind of like an old dog that ain’t housebroke”, Van Zant said in a 1976 interview and requests for their most (in)famous song have been pissing on the legs of musicians regardless of genre at live shows ever since.

okc.net will spare its own witty editorial comment and allow the musicians to answer the penultimate final interview question themselves and in their own words. I call it “The Freebird Question”.

Q: What do you do at a show when someone screams for “Freebird”?

Chad Bennett (The Electric Primadonnas): “It actually happens more often than you’d think. Imagine, in between songs, getting ready to jam it out, or possibly looking to your other band mates to see what the next song may be, then BAM! From out of left field in the crowd you hear a distant, ‘FREEBIRD!’…It’s happened so many times.

I heard once upon a time, before I had joined The Electric Primadonnas, the band actually DID know how to play ‘Freebird’, and would do so if they would hear the obnoxious redneck call.

I personally do not know how to play the song. I was never a Lynryd Skynryd fan. Actually, I can’t stand their songs. I think they sound the same. I can’t tell ‘That Smell’ from ‘Gimme Three Steps’ or ‘What’s Your Name’”.

Minna Biggs (Local Honey): “Yes, we can and have. Drava knows the lyrics, she just tells me what key to play in. I’m familiar with how it goes, but I have never sat down and learned it.

We played it at the request of rowdy drinkers at Prohibition Room last winter. They loved it. People seem to think you’re a bad ass musician if you can play it. It was fun.

The other songs we get requested a lot, because of the fiddle, are ‘Devil Went Down to Georgia’ ‘Orange Blossom Special’ and ‘Wagon Wheel’. I don’t mind at all playing these for folks. I want to keep them happy. That way they are more receptive when we throw in our originals.

I am thrilled when someone requests an original. That is near and dear to my heart. Hardly ever happens though”.

Jack Elliot (DJ, 98.9 KYIS FM): “I did play drums in a bunch of bands back years ago…long before ‘Freebird’ was popular. Today, I think I would go ahead and begin playing the strongest hook or most identifiable part of that song for about forty seconds and immediately bust into something I really wanted to play.”

Mike Hosty (Hosty Duo): “I play the slide guitar intro to the song, stop and say, ‘That’s it! That’s all I know how to play…’ You would think they would boo but most folks think it is pretty funny.”

Anna Kinder (solo singer/songwriter): “I have had it happen so many times… I just laugh and say, ‘Reeaaallyy?’”

Ryan Lawson (Hack and Saw Nation): “Isn’t that just a running joke? No, I can’t play it. I played a few real rough hole-in-the-walls where you sort of felt like you had to play it. I mean…I didn’t. But…”

Christophe Murdock (Chris Murdock and The Prairie Fire): ”I don’t play it. I usually challenge the person to come up and play it instead. That shuts them up. A lot of times, I’ll just do some random three chords and let a drunk come up and sing some Skynyrd over it. They leave happy and I have some fun.”

James Nghiem (The Ngheims): “I kind of sigh sometimes, because it used to feel like you could almost never go to a show without someone doing it. You could get close but there would always be someone. It would always be a couple of hours into the show. Someone would scream it, and I would just be like, ‘Man, Almost made it.’ Lately, I think it’s kind of going out of style.

The only time I remember hearing it when we played, my friend, Cliff was the one screaming. I just kind of shook my head. I’ve seen one band actually play it. The lead singer and guitarist went into it and the rest of the band kind of shrugged and followed. I thought it was really funny, but I think they kind of felt dirty afterwards.”

Ferris O’Brein (DJ, thespyfm.com): “If it’s in the studio or a live DJ gig, I simply say…’I’ll get it on next.’ Then promptly play ‘How Soon is Now’ by The Smiths.”

Dustin Prinz (solo singer/songwriter): “I ignore those people! If I’m in the mood to fight, I usually respond by saying that there is a good chance that plane crashed for a reason. This terrible song was never meant to live on. It will haunt musicians until the end of time. I am just kidding but not really.”

Katie “Khaos” Stephens (The Needles): “I can’t play ‘Freebird’ but I wish I could. It’s a great song. It was a good band. My first concert was ZZ Top and Lynryd Skynyrd. I mean Artimus Pyle crawled across the ground with a gut wound to get help for the others after that plane crash. You have to respect that. If I could play a Lynryd Skynyrd cover it would be ‘The Ballad of Curtis Loew’ though.”

Johni Walker (Travis Wackerly and the Post Okies): “This happens quite often! Unfortunately, more often than not it’s the loudmouth drunk of the venue (there’s always one) that shouts it instead of somebody that actually appreciates a truly well written, timeless song. I am one of a handful of musicians I know who WILL play it because I am one who can appreciate it!”

It is the hope of us here at okc.net that you think twice before shouting your request. Check your blood alcohol level. If the light is green and you still need some Skynryd, run it past your friends first. You don’t want to be “That Guy”, do you? Maybe you do! Think carefully before you open your mouth and consider what musician you are shouting to. Results may vary.

In any case, you are welcome for the earworm. Enjoy.