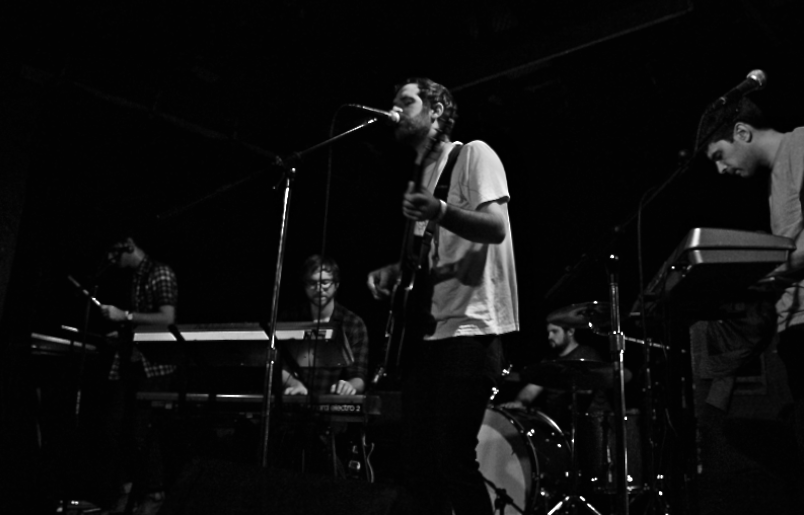 Milagres released Glowing Mouth in September and I have to confess that few other albums since have managed to capture my attention so completely. And this takes into account that Iâ€™d purchased five other albums around the same time from other artists like the Dum Dum Girls, Wilco, Blind Pilot, Blizten Trapper, and Ladytron. But only Glowing Mouth got anywhere near my T.V. on the Radio play counts, for the record Iâ€™ve listened to Nine Types of Light about 53 times since it was released this spring with The Antler’s Burst Apart coming in a close second with around 46 plays. That said, Iâ€™ve listened to Glowing Mouth about 20 times over the course of a month. So it might border on understatement to say that I was jazzed about attending Monday nightâ€™s show at the Opolis, because frankly Iâ€™d fallen hard and fast for the lyrics and arrangements on Glowing Mouth. Iâ€™d also enjoyed their previous effort Seven Summits too.

Between Glowing Mouthâ€™s release date until the time of the show, I decided to harness the power of Google to search for online videos of their live performances. Concertgoers know that songs from any album can sound vastly different in their live incarnations.

So from the comfort of my living room, I clicked on a video recorded when theyâ€™d made an appearance on the Big Ugly Yellow Couch. If you are unfamiliar with this website, essentially bands perform acoustic versions of their songs on said ugly couch. I was impressed with the bandâ€™s ability to play unique and enjoyable acoustic adaptations of Lost in the Dark, Here to Stay, and Glowing Mouth. Even so, Iâ€™d yet to hear them play live. And I wasnâ€™t certain as to what I would hear come Monday night when theyâ€™d have a full stage on which to perform and of course an ample supply of electricity. Yes, I know there’s youtube and the band’s website with other performances, which I looked those up too, but I liked these versions done on Big Ugly Yellow Couch more.

Lost In The Dark by Milagres from Big Ugly Yellow Couch on Vimeo.

At any rate my anticipation grew with each play count and of course like any music lover going to concerts, I had songs Iâ€™d wanted to hear. More on that later. Fast-foreword to Monday night when the opening act The Rockettops were jamming away and the members of Milagres and I were chatting in the parking lot behind the Opolis. Subjects ranged from the bandâ€™s previous name, musical influences, the tour, their favorite songs on Glowing Mouth, their guilty pleasure songs â€“ or more accurately songs they like and refuse to feel guilty about – and whatever else came up in conversation, i.e. Star Trek shows and movies.

Do not be mistaken. This was a very informal interview and probably nothing like what youâ€™d expect from a NPR or Pitchfork. Straight up: I spent so much time listening to their music it seemed only natural to have a laid back conversation about who each of these guys are and what kinds of influences went into making of their music.

I asked Kyle Wilson, lead singer and songwriter, about the band’s first incarnation since the previous name had been one of those little intellectual hooks that caught my attention. Known previously as The Secret Life of Sophia, I’d been convinced their first name had to do with Carl Jung’s theory of the anima and the developmental stages known as: Eve, Helen, Mary and Sophia. I wasn’t far off the mark.

“It came from gnosticism,” Kyle said. ” which in early Christianity means wisdom, but it goes back even further into pre-Christianity. The pagans used Sophia as another name for god, like a female god.”

Eric Schwortz, guitarist, backing vocals and percussion, spoke for the band when asked what musical influences they shared. “Beatles, Deerhoof, I think I can say for most of us Nirvana was an adolescent touch stone…” Eric looked around and saw his band mates nodding in agreement. “We also like Hooray For Earth, Elliot Smith, Tom Petty, St. Vincent and Glass Ghost.”

In turn they asked me which of their songs were my favorites. My preferences range from week to week, but I told them I enjoyed Outside from Seven Summits and that at that moment I really liked Lost in the Dark and Doubted from Glowing Mouth. Honestly, I would have listed off Moon on Sea’s Gate, For Disposal, and To Be Imagined, but rather sound like a sycophant, I kept my list short and sweet. They said they’d play Outside and Lost in the Dark, but hadn’t developed the live version of Doubted quite as much since it was a song people didn’t request.

Continuing with our round robin discussion the band listed their favorites from the album. Kyle said he liked Fright of Thee and For Disposal, although Glowing Mouth was another favorite of his when the album was first released. Chris Brazee, keyboard and keys, said he was a beast man and so his choice was Gentle Beast. Frazer McCulloch, keyboard, bass and backing vocals, said he liked Doubted too. Eric agreed. The band speculated as to the favorite of Steven Leventhal’s, drums and percussion, they wagered that he liked For Disposal and when Steven arrived, he confirmed that his band mates had guessed correctly.

From there we talked about bands and songs the members of Milagres don’t feel guilty about liking even if other people hate them. Kyle said he enjoyed Madonna’s Confessions of a Dance Floor because it was well-crafted. And even though he’s not big on the lyrics he was amused by them, for instance when Madge rhymes New York with dork. The other guys gave Eric a little bit of a hard time for liking Huey Lewis and the News, but Eric also listed off Hall and Oates and the Eagles. Kyle said he hated the Eagles, but could respect the song “Take It Easy” because of Jackson Brown’s involvement on that track. Chris didn’t offer up a particular song, but said he liked metal and probably had more of it than the others on his iPod. The example he gave was the metal band Slayer. Steven mentioned Kelly Clarkson, but would not go into further detail. About this time Eric said he could see why people like Kelly Clarkson’s songs, and that even though he understood Since You Been Gone was a well-crafted pop song, he still didn’t like it.

The tables turned when Kyle asked me what my guilty pleasure was. I said Hoobastank The Reason. I don’t know any of Hoobastank’s other songs, but it is just so darn catchy. Naturally Kyle laughed at this. For the record, I don’t ask questions I’m not willing to answer too.

We moved away from this topic slightly when we delved into the subject of touring. The band said there’s a lot of down time and after scrolling through one another’s iPods – where the likes of MC Hammer and an old Soundgarden album from ten years ago are rediscovered – they have turned to podcasts. Some how we got on the topic of Star Trek. Not a huge leap in the conversation since this is what some of them watch during downtime, and I’ve watched the original episodes on Netflix recently so it’s not like I could have pretended that I don’t like the series and spin offs too. Eric says he’s watching Next Generation from start to finish and lists off his favorite original cast movies. We could have gone on and on, but alas they had a set to go play. 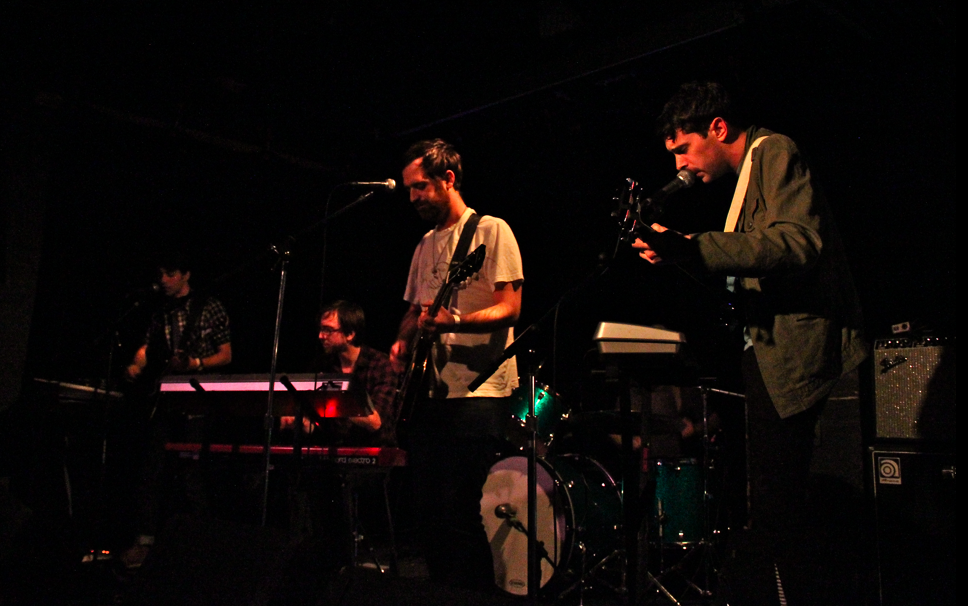 For a Monday night the Opolis had a pretty decent turn out and those in attendance were treated to the following songs.

The take away? Milagres plays an incredible live show. Many of their songs sound very similar to how they were played on the album, which goes to show that the level of musicianship in this band is legit. If they are in the area again, I’m definitely going seeing them play. Plus I’d like to hear that live version of Doubted.

3 comments to “Milagres: The Questions, The Show and The Conclusion.”