Here at OKC.net we support our Oklahomies no matter where they are, and to that end we are following up with Mark Potts from Singletree Productions and their latest effort to make it out there in L.A.

How did you (and/or Singletree) get tapped to produce webisodes for Rooftop Comdey/MSN?

I had been writing for Rooftop for a few years doing movie reviews and funny television blog posts, so we got in through that way. Rooftop and MSN are teamed up, so they asked Brand and Singletree to come up with some funny videos.

Who is Donald and how was he conceived?

Donald is a gentle young man with no idea what he is saying. The idea was simple. Brand is funny playing a nerdy guy, so we dressed him up that way, and had him act nerdy, but we asked him to play a huge jerk. That way, we are sort of turning the “nerdy guy can’t get girls” cliche on its head.

Do you have plans to record more shows with Donald?

We’ll probably make six episodes and go from there. Rooftop and MSN like variety, so we did six Gravy Talk episodes and now we’ll do six of these, then go onto another idea.

Are you finding a lot of support from Oklahoma friends and family with your online ventures while out there in L.A.?

Absolutely. Singletree has a nice core fanbase in Oklahoma and Texas and moving away hasn’t affected that at all. I think as long as we don’t change and keep doing what we are doing, then we’ll always be Oklahomans in another place, and that is nice. 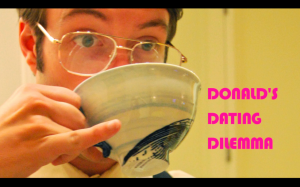 Keep up to date with Brand Rackley at http://thebrandrackley.wordpress.com/