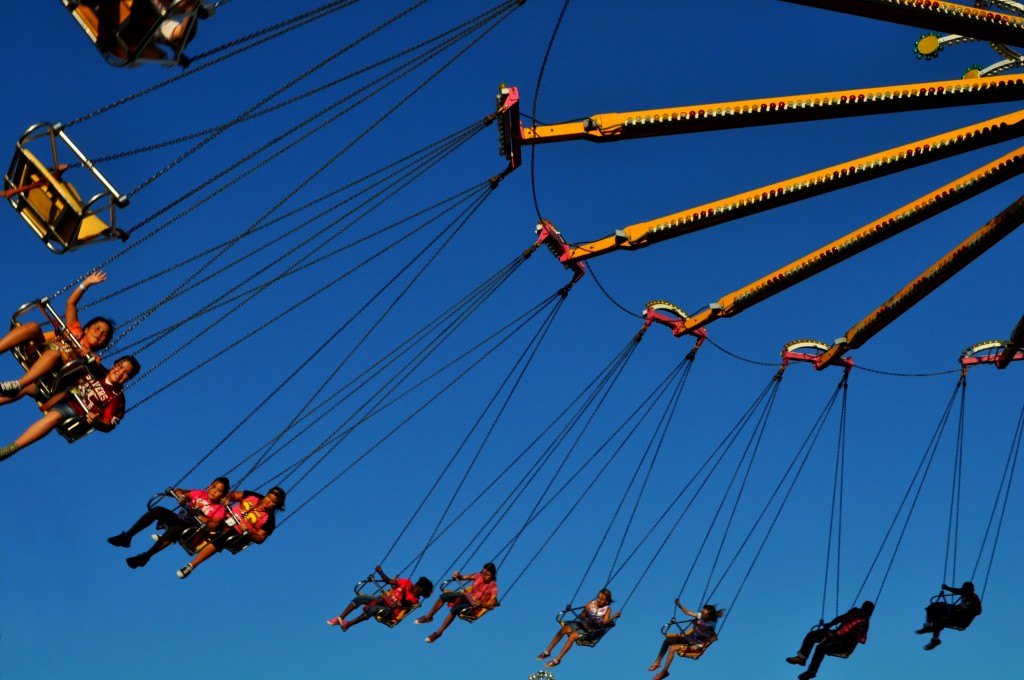 Whirl and Puke at the State Fair- Photo by Lynne Rostochil

What is there to say about the fair? You could say it’s maybe the the purest manifestation of Americana. Conversely, you could say it’s a good place to go to laugh at people who don’t realize they’re being subjected to a unique brand of cruelty disguised as ironic cultural consumption. You could say it’s a good place to get fried food, or even that it’s a great place to take your family. Whatever you think about the fair, you have to admit it’s pretty impressive that, every fall, an entire city rolls into the metro area, holds court for ten days in the crook of two highways, and just as suddenly leaves, with nothing to remember it by but over-sized plush animals and indigestion. Call it the best part of the year, or the redneck hajj, or Burning Man with fewer failed artists and hallucinogens. The Great State Fair of Oklahoma escapes easy classification. 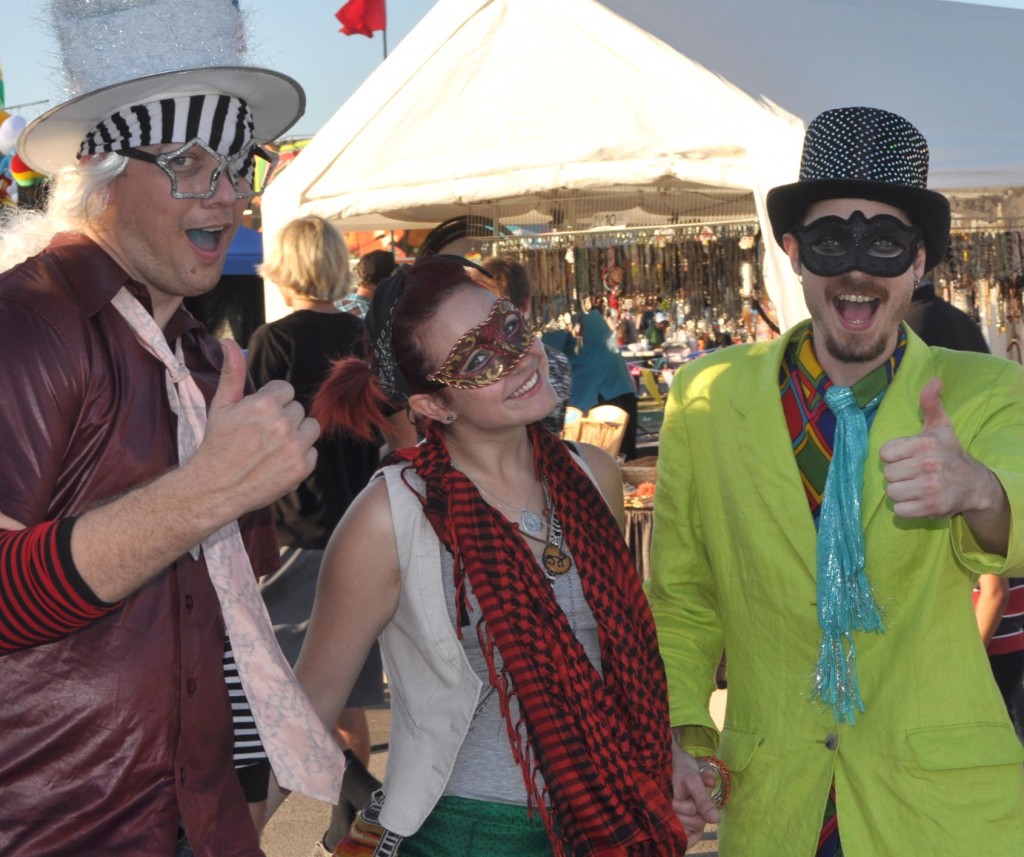 Much like Peter Fonda and Dennis Hopper in “Easy Rider”, I and my brave companions set out for the fair on Friday night, looking for what we could find of America. Walking up to the ticket booth, we saw an elderly man with dreadlocks, a cane, and a top-hat accompanied by a much younger, very overweight woman who was wearing a shirt that read “High-End Shit” in sequins. Both were white. Yes, we were getting closer. 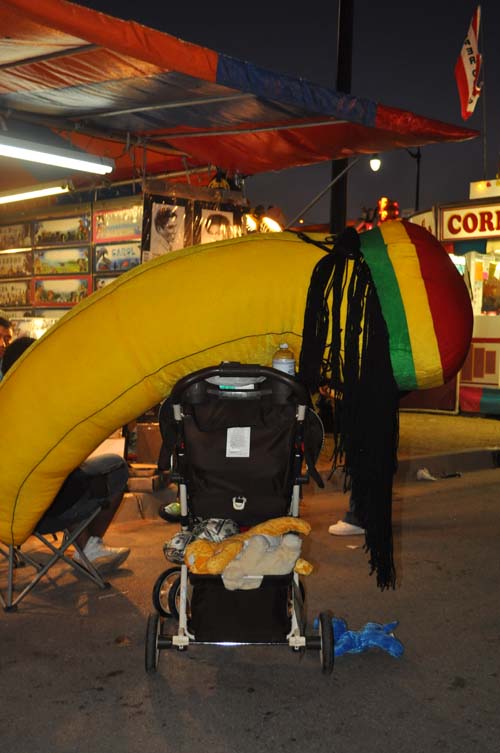 Would someone please explain this to me? - Photo by Lynne Rostochil

I began my research for the evening by purchasing fried cheese on a stick, which is essentially a corn dog, but the “dog” part has been replaced by melted cheddar cheese. I’m not sure where the tradition arose to fry everything and put it on a stick (maybe making it easier to carry, or eat while walking?), or what logic led to the creation of such culinary delights as the “roast beef sundae”. Perhaps it adds to the feeling of transience of the fair culture, that this is the only place you can get this food, and you have to get it before it’s gone.Â  Like a mirage in the desert, chocolate covered bacon on a stick appears for a moment, then vanishes. 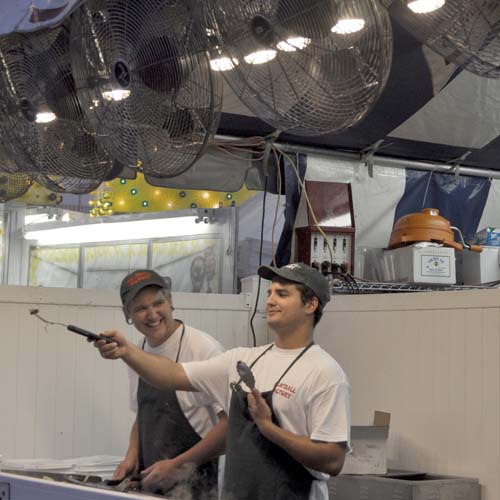 I’ve gotten cheese on a stick every time I’ve been to the fair for as long as I can remember (which is maybe 12 years of “walking around the fair” memories). Before that point, I only have vague memories of my father taking my sister and myself to see Disney on Ice using free tickets from work every year. Other food items purchased on this trip: 1 order strawberry crepes, 1 smoked turkey leg (the entirety of which was eaten by the diminutive Asian girl in our party), 1 pulled pork sandwich, 2 corn cobs, 1 cotton candy.
The fair is more than just fried food in increasingly bizarre and numerous iterations, though; visiting the livestock building, I was exposed to a world completely foreign to my own experiences. The building was mostly empty, and only a few people were still there, washing their goats after preparing for a show or competition the next day.Â  It seems that animal husbandry is in general a family affair; there were two adolescents, probably brother and sister, who were washing their goat while wearing Wranglers and OSU shirts. My sister and I never did anything like that growing up; we mostly made fun of 80’s movies and watched far too much Vh1. That these two teens had so much responsibility for an animal amazed me; I’m sure this would shock everyone who knows me, but I could probably never cut it on a farm.
Further into the building, we saw stalls full of baby animals, and piglets that had been born at the fair earlier in the week. A particular friend of mine who is in medical school- and has a somewhat unsettling interest in live animal birth -was upset that the piglets had been born before we’d gotten there. Remembering the Houston rodeo we went to with my sister last spring, wherein the calf births were played live all over the event on closed-circuit television, I found I could not share her disappointment. 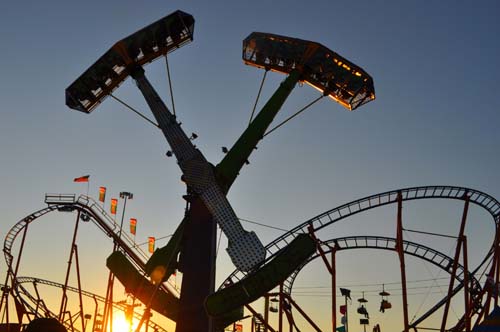 After losing some money on the ubiquitous carnival games, we decided to call it a night. Leaving the fair, we saw a boy who was maybe thirteen walking around with his parents wearing a shirt reading “Money Over Bitches, Family over Everything”. There’s something to be said about that, but it’s hard to say what. 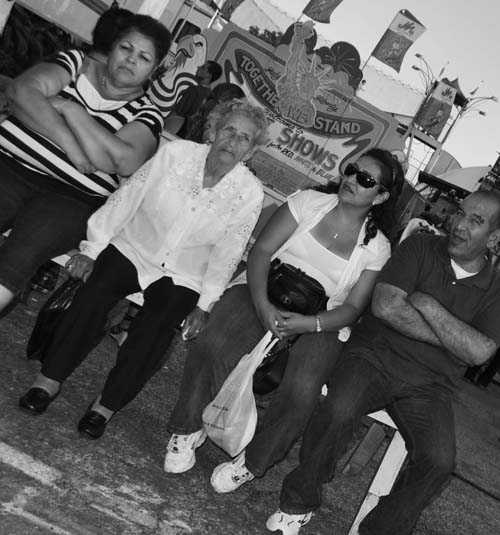 When you add up all the parts of the fair, the whole is most definitely greater than the sum of the parts, but I don’t think anyone can easily articulate what that sum is. Yes, it is ridiculous, even maddeningly so, and yes, there’s a lot to laugh at about the fair. Make fun of the fair if you want (and there’s no shortage of glorious tackiness), but there’s a vibrancy, a very real, eccentric, electric energy to the fair that doesn’t exist anywhere else in Oklahoma City for the rest of the year. Perhaps the best thing to say about the fair is that’s it’s authentic, and that, for better or worse, going to the fair may in some way help you to tap into the heart of the authentic Oklahoma experience. Maybe, for that one week, you can put your finger on the pulse of Oklahoma, and feels its lifeblood pumping beneath you. 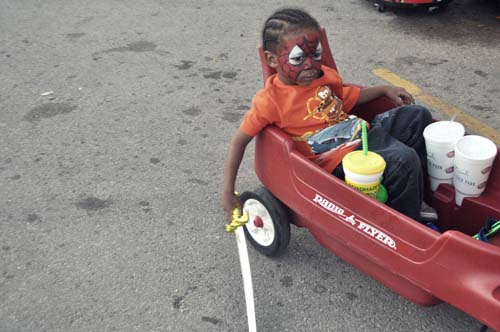 And having answered so I turn once more to those whoâ€¨Â Â Â Â  sneer at this my city, and I give them back the sneerâ€¨Â Â Â Â  and say to them:â€¨Come and show me another city with lifted head singingâ€¨Â Â Â Â  so proud to be alive and coarse and strong and cunning.
–Carl Sandburg, Chicago, 1916 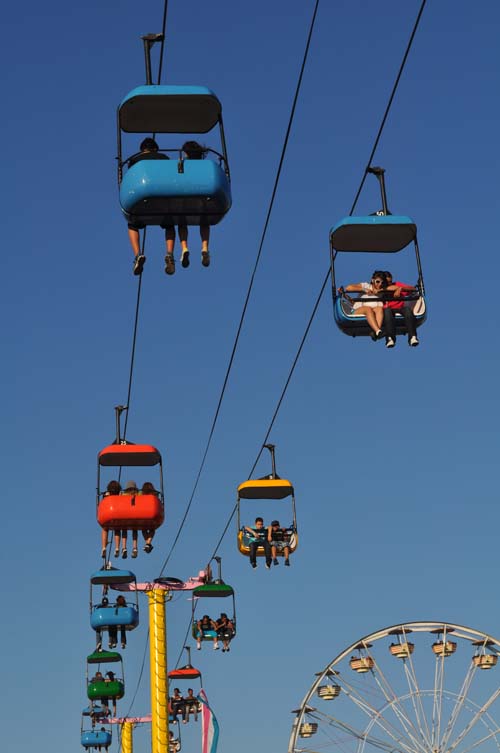 Sky Ride, one of the last original attractions still in operation - Photo by Lynne Rostochil

2 comments to “There’s Always Next Year, or: How I Learned to Stop Worrying and Love the Fair”