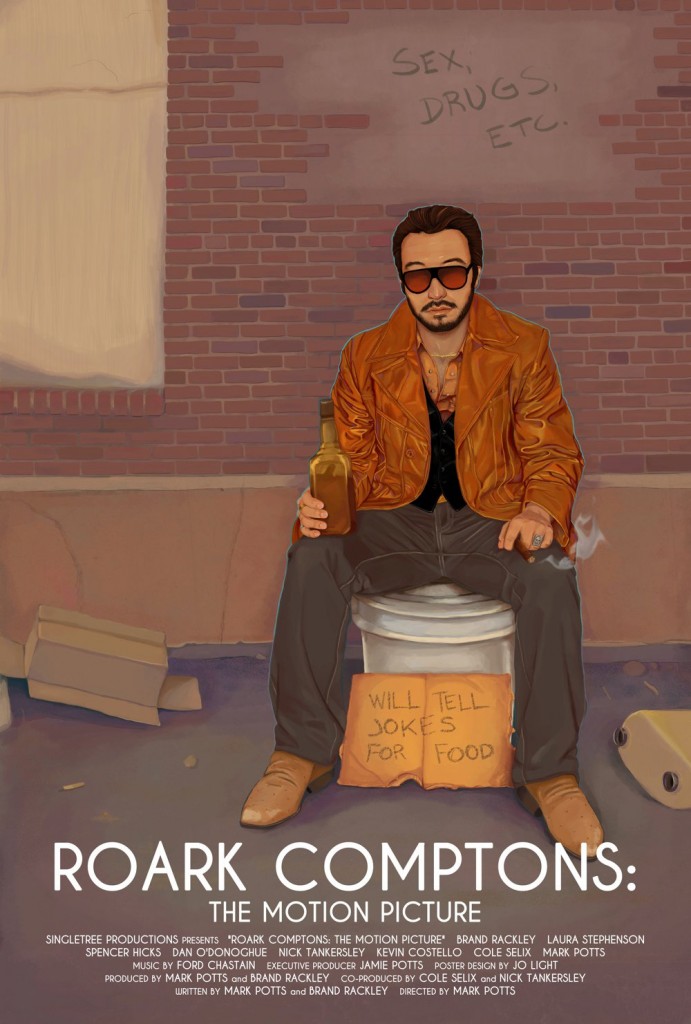 The real joy of ribald comedy is the freedom found in laugh had the expense of the vulgar and grotesque. To this end the creators of â€œRoark Comptons: The Motion Pictureâ€ have freely orchestrated some of the most absurd of situations imaginable.

Brand Rackley, who plays Roark Comptons, said the production came about as a way for the members of Singletree Productions to creatively engage in stress relief. Thus in a fit of guerrilla-style movie making they simultaneously shot two movies. Their more mainstream effort â€œCinema 6â€, formerly titled â€œSplice of Lifeâ€, chronicles the parallel lives of three friends as they struggle with the expectations of adulthood. Intended for larger film festivals, Singletree Productions filed for filming permits, raised funds for production all whilst following the legally binding terms and conditions of multiple contracts. Thus at times these procedural measures became stressful.

Soon Rackley was asked to reprise his role as Singletreeâ€™s bawdy mascot. To understand the enigma that is Roark Comptons, Nick Tankersley said you would have to travel back to a time when Comptons was just another bit character in a series of web episodes entitled â€œSevere Cuddlestorm.â€ Rackleyâ€™s performance as Comptons has steadily refined from project-to-project.

Thus as Roark Comptonsâ€™ status as legendary Hollywood agent grew, so too did his ego. Naturally the movie starts after Comptonsâ€™ fall from the good life. His outlook changes after he heckles a comedian and finds himself challenged to do a better job at telling jokes. After taking the stage, Comptons comes to the conclusion that the only way to regain his happiness is to succeed in the cutthroat business of stand-up comedy.

And his archrival is none other than Darren Wells, a successful comedian who has an HBO special airing April 28th at 8 p.m. central time. And just in case anyone should forget this life altering time and date, Wells, as played by OKC comedian Spencer Hicks, will remind anyone and everyone of just how awesome he is by repeatedly slipping it into conversations. His catch phrase, and incidentally his showâ€™s name, is â€œBrutally Murdered.â€

The ensemble is a bizarre one. Director Mark Potts also pulls double duty as an actor in this film. His character is a creepily childlike man named Carl. Carl has no last name. And for reasons related to pugs, diamonds, clones, and guns, Carl is an odd choice of straight man for Comptonâ€™s morally depraved funny man. Strangely, it all works out and their friendship survives the plotâ€™s most trying moments. Some characters, however, are not so lucky.

There are some genuinely funny moments that donâ€™t involve scat humor or random liaisons with drug dealers. Comptonâ€™s girlfriend Margret, a sweet woman with a disturbing fetish, is one of two characters who adds a touch of honest levity in a film that is otherwise full of scoundrels. But to reveal the other nearly angelic character in Comptonsâ€™ social sphere would ruin the surprise.

All said, for a movie shot on the fly and with dark scandalous humor as its main objective, â€œRoark Comptons: The Motion Pictureâ€ is shot with more finesse than those earlier web episodes. For example, Potts uses a series of close ups to humorously imply that a statue of Abraham Lincoln was indeed having a meaningful discussion with Compton. And because this effort was accomplished gorilla-style, it is worth noting that Singletree Productions got kicked out of a few places while filming. However, there are some nicely done scenes that give this irreverent comedy a noir edge. One notable scene pans upwards to the Chicago city skyline, slowly revealing a beautifully lit street sign as Compton dejectedly walks the streets. Other filming locations included Milwaukee, Detroit, New York, and Oklahoma City. Ford Chastainâ€™s musical arrangements also do a nice job of underscoring both the comedy and the heartache of Comptonsâ€™ journey.

While the Roark Comptons character represents a darker side of Singletree Productions, Rackley said that they are submitting the film festivals like deadCenter. If â€œRoark Comptons: The Motion Pictureâ€ does end up on deadCenterâ€™s 2012 program, expect it to be shown very late at night.