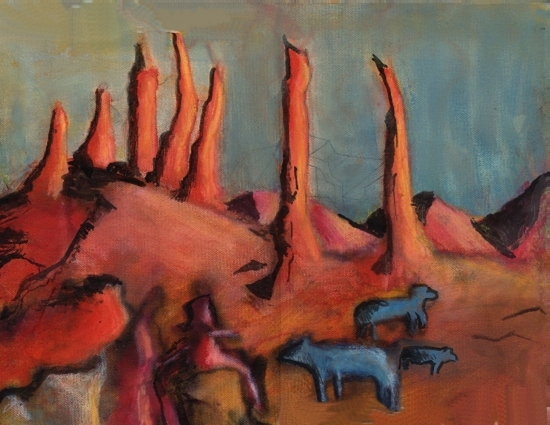 Oklahoma’s on a streak that has nothing to do with a certain nearly-triumphant NBA team. The only award we’re winning is the Most Triple-Digit Days in a Row, and there’s no prize for that (that we know of). Really, we’d be okay losing to 1980, the year that established the 50-day streak that we’re on the heels of catching up to.

Why is this happening? The Midwest is being tormented by a weather phenomenon called a “heat dome,” a one million square mile high pressure system that traps heat in a – you guessed it – dome of pure sweltering evil.

The state government is too busy dealing with water-main breaks and computer systems shutting down to declare Free Popsicle Day, so we’re here to bring you the best heat hacks we could think of.

And private in his chamber pens himself,
Shuts up his windows, locks far daylight out
And makes himself an artificial night

When Romeo was all depressed because he was lovesick (this was well before Juliet was in the picture), he turned his room into an emo cave. This is actually an effective way to keep your house cool, and you don’t have to couple this tactic with heavy doses of sad bastard music. Block off windows that receive the most sunlight during the day for an instant cooling effect (and savings on your OG&E bill).

Nobody Move, Nobody Gets Hurt

If your torpid state has you worried, we say, go with it. Your fatigue is your body’s way of indicating that it’s dealing with more than it can handle. Don’t beat yourself up if you’re feeling too lethargic to keep up your normal routine. Listen to those inner cues that force you into afternoon naps and skipping the gym. Getting overheated is a serious problem. Your body is basically a giant bag of water, so when you start expelling more water than you take it, bad things happen. So, lie down, relax, eat a popsicle, drink huge amounts of fluids, etc.

(editor’s note: this marks the first appearance of the the word “torpid” on our site. It likely will not be the last.)

Let’s All Have Another Orange Julius

You know you’re supposed to drink water, and really it’s an effective way to cool your body, but ice water can be a bore. Cool off with some frozen yogurt, a sno-cone, or a smoothie to pack a little nutrition into your routine (okay, sno-cones have basically no nutritional value, but they’re quite tasty).

If it’s too hot to leave your house, here’s a simple recipe for making your own yogurt snack:

Buy a tub of plain vanilla yogurt and as many kinds of fresh fruits as you enjoy. In a tupperware container, mix the yogurt and sliced up fruits together. Freeze for several hours. The consistency isn’t the same as frozen yogurt, but it tastes richer and it’s better for you.

A beat the heat guide wouldn’t be awesome without recommendations for dark bars to cool off in. Luckily, the metro area is full of them. Here are our favorite bars to hide in when the sun is being the Blaster to our Mad Max.

The newest entry in the beermuda triangle of trendy bars, this place is exactly what it sounds like.

The original kinda sorta gay bar/punk venue has incredibly strong drinks. You won’t have any choice but to sit in the AC and sober up.

This is what the 1970s were like. Covered in red velvet and oil money.

Norman has hipsters too!

Drinking every beer on their menu would set you back several thousand dollars and probably require a trip to rehab.

The Lunch Box is some kinda workingman’s magic tonic that instantly makes Johnny Cash songs play on the jukebox.

Here are a few recipes for refreshing summer drinks that will cool you (and maybe give you a nice buzz too).

Add ice to a highball glass, and pour in a shot of vodka. Top off with grapefruit juice.

1 can of frozen OJ Concentrate

In a pitcher add the OJ concentrate and cup of vodka. Top off the pitcher with beer. Stir until all the OJ lumps are dissolved. Serve in a requisite red plastic cup. Get drunk faster than you thought possible.

Doesn’t even taste like there’s alcohol in this one.

In a large pitcher or bowl, mix together the brandy, lemon juice, lemonade concentrate, orange juice, red wine, triple sec, and sugar. Float slices of lemon, orange and lime, and maraschino cherries in the mixture. Refrigerate overnight for best flavor. For a fizzy sangria, add club soda just before serving.

Not all of us have the luxury of backyard pools, so many of us are stuck with two options: 1) Suddenly rekindling friendships with friends who have pools or 2) Putting up with the splashing kids at public pools (alternative third option for the rebel: sneak into hotel pools. It’s easier than you think). There are some pretty decent public pools in Oklahoma, so if you’re willing to put up with a thronging crowd for a few minutes in chlorine heaven, check these spots out:

In Case of Emergency

Air conditioners are running full-time, and as such are placing a strain on the local power grids. If you have the hellish misfortune of experiencing a power outage at your home, employ these tricks to stay cool:

2) I learned this trick when I lived in India for a summer, and it works very well: Run a towel under cold tap water until it’s soaked thoroughly. Ring it out and then drape it over your (naked) body. This will keep you cool even when there’s no electricity in the house.