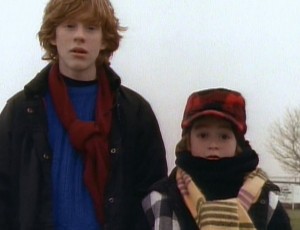 â€œYa know the feeling you get after you hear your favorite song for the first time? All you want to do is play it again and again so it stays stuck in your head forever… Well, what if you could only hear it once and that was it? What would you do?â€ – Pete Wrigley (Older), The Adventures of Pete and Pete

Ok. Let me just get this out of the way before I even start: I love music. Music has constituted a huge part of my identity ever since I decided to turn up the radio for the first time for a song I like, first identifying me by my specific tastes (punk, the ultimate music identity) and now by my eccentricity and openness to new things. I read music blogs, I play a musical instrument or three, I listen to music constantly…

I’m a music fanatic, but I do have something musical in common with the general, not crazy-indulgent public. We all have favorite songs.

Nearly everybody likes to listen some sort of music, derives some pleasure from humming along or tapping their feet to the beat, but favorite songs are different. Favorite songs bury themselves in you, they cling to your nerves, they break your heart, or make you fall in love. Ask somebody where they were when they first heard their favorite song, and chances are good they’ll be able to recount it in painstaking detail. Entire landscapes are built in our heads around a few magical chords or a lyric that twists in your brain long after it’s been sung.

Hard Day’s Pete is the season 1 finale of The Adventures of Pete and Pete, a Nickelodeon show you probably either remember with fond nostalgia for its quirkiness or revulsion for its weird non-cartoon cartooniness. It was a landmark of early-mid 90’s surrealism that was being pitched to kids who were probably too young to understand what made it so cool. And maybe that is what made it so cool…

Anyways, Hard Day’s Pete: Younger Pete has never had a favorite song, so music as a whole kind of seems like a bland mayonnaise to spread on the sandwich of life. Then everything changes when he hears the sounds of Polaris (the band that plays over the opening credits) emanating from a garage while he’s riding his bike to school.

The problem comes when the band disappears without a trace leaving Pete with 3 chords mashed in his brain, and creeping forgetfulness threatening to erase it forever unless he did something. So, being Pete, he did something: he teaches himself to play guitar so he can play the song, then he starts a band with his math teacher and the electrician so he can play the song with a band and maybe remember the whole thing. For each obstacle thrown into his path (eg the band gets bored with playing the same 3 chords over and over again) Pete finds a way to overcome it, making whatever sacrifice he needs to.

For instance: his dad threatens to cut the power â€œunless he can pay the $700 billâ€ so Pete starts taking requests and begins playing everyone else’s favorite songs for money.

He eventually leaves the band because he never wanted to play other peoples’ songs, he wanted to play his song… but when he tries to play it again, all he can remember is one note.

This synopsis is really just to illustrate my modest purpose in this article… music is music, but favorite songs are something that can’t be touched. Even if you aren’t a music freak, or someone who defines themselves by what they listen to, your favorite song is yours and can only be yours.

At this point, I’m going to say that the article is finished and we’re moving on into a second act: interpersonal connectivity.

You and me. Let’s talk this shit out.

â€œHard Day’s Peteâ€ is just a cautionary tale: more or less it’s meant to be a catalyst for you (the viewer) to think about that extremely human part of you. That part that makes mistakes all the time, that remembers things with nostalgia and sometimes regret, that likes beer and cigarettes and hates coffee, and that loves â€œIn Between Daysâ€ by The Cure in a way that is embarrassing outside of just you. The guys who made Pete & Pete were so sublimely conscious of that thing that makes people people, and it’s clear from every episode of the show.

There are episodes about not being able to communicate with your parents, dealing with death, trying to turn friendship into romance, worrying about your future… None of this really seems to be all that original on paper. I mean, these are things that everybody does. However, P&P is able to reach out to the humanity of every unique individual and the characters in the show deal with these everyday situations in their own way.

What I’m saying is that we all live on the same planet, but each of us experiences a different world, completely unique to each of us.

So here’s the interactive portion: I want you to tell me about your favorite songs. I just want to see a list, or a story, or a video, or something. I want you to share yourself, because this is the fucking internet, and we are fucking people, and isn’t it glorious to know that there’s nobody out there like you at all? Not even on the vastness of the world wide web? Don’t make your list with an eye to looking cool, or to impressing the opposite sex, or trying to project any sort of image. Let down your guard, reflect on the songs that have meant something to you, and share.

LCD Soundsystem â€“ All My Friends

The Refused â€“ Summerholidays vs Punkroutine

The Postal Service â€“ This Place is a Prison

or 12ish… Over the years, things have changed, but things that break my heart, or make me smile, or feed my rage have stayed with me, and each of these songs will move me today in their way.

5 comments to “Hard Day’s Pete: Songs That Mean Everything”