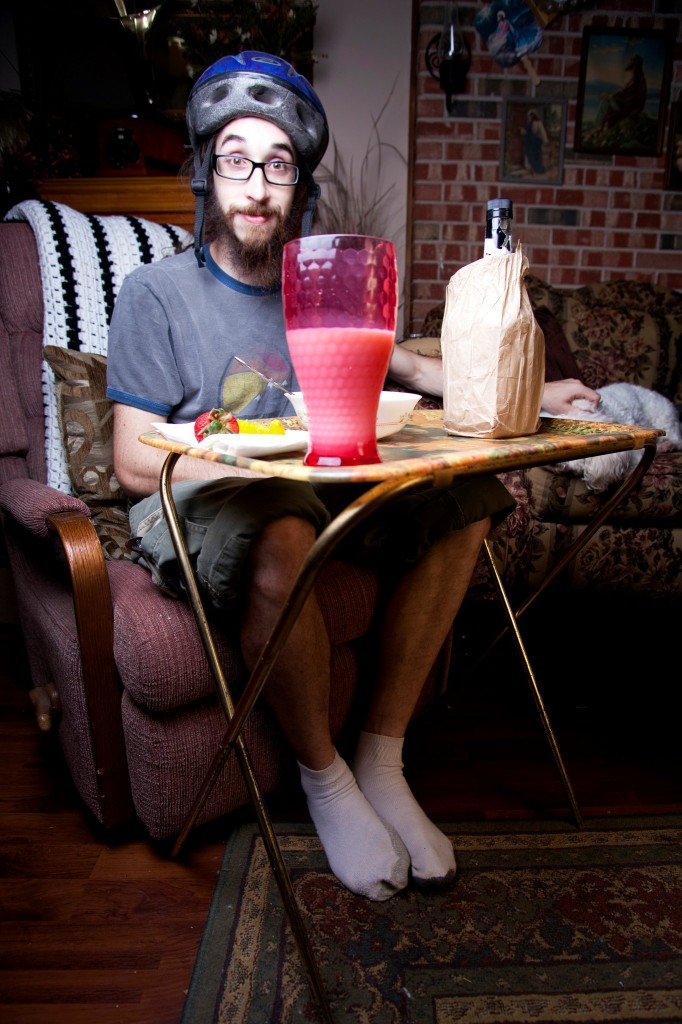 If you have an opportunity to talk to Kyle Mayfield, aka Larry Chin, between one of the five music projects/bands he’s involved in, take it. This guy is crazy knowledgeable about the local music scene. His passion is infectious (in the best way possible). We caught up with him for a few minutes to get his insider perspective on the 405. Catch his Junebug Spade show tonight with DEERPEOPLE at The Opolis

For me, its all three, ha ha, but to each his own. Music ALWAYS comes first though…not saying that sometimes it don’t, but it is definitely number one. The other two enhance the music anyway…most of the time…

All of the above. No question there. They have all added elements that have shaped what we listen to now, and all did it very well. Even ‘ol Iggy and the peanut butter.

Now this one here, is quite the question, but i have answers.
in NO particular order:

Now, I must talk briefly about each one cuz I must:

Colourmusic has always been a favorite of mine, even going back in the day to the art house shows we used to play in Stillwater. Their live shows have always been an experience, and the music always kicks ass…however their newest album is by far my favorite album of the year locally, and I’m resting assured that it will remain in my top 5 of the year locally and not. All around musical bliss. Outstanding.

TGAOF/Colin Nance – These guys, no one makes music like these cats. They do it like they have been doing it for decades. Unique, powerful, and one hell of a live show – these cats never cease to amaze me. I’m always sucked in to what they are gonna do next. One of the few bands I have seen ever that I sometimes don’t even realize that my eyes are closed and there I am….floating away. A MUST SEE and HEAR. I can’t wait till they release the new album. They are bastards for makin’ me wait. Colin Nance’s album “Summer Fever” is so great. He knows exactly what he is doing and he does it DAMN WELL.

DEERPEOPLE – I motherhumpin’ love these guys and gal. I have to see them every chance I get and I love throwin’ down with them too. GREAT music, GREAT live show, CRAZY BUNCH of good times. EVERY show is a party that winds up in weird mosh pits, lack of voice from singing, tired legs from dancing, and a million smiles. Oh, also the ear-gasms that are provided. How do you go wrong? You don’t. How does it get better? Alex without his shirt on.

People, People – Now, I have only seen these guys once at Norman Music Festival this last round. First and only time, and they blew me away. Then I got their album…stupid good. They take their time in building and telling these stories, and all of the sudden they will get to these huge landscapes of music only to bring you right back down to just piano and vocals..teasing you. They bounce from different time signatures to straight jammin’ to absolutely so quiet. My musical ear is constantly being tickled and I love it.

MOON/The Wurly Birds– I had to put these two together. I’ll start with MOON: the energies and sounds that are created by Blaise and the boys just hit me in a way I cant describe. My fire is ignited and I am forced to dance in an almost tribal manner. It’s very natural like I have no control over it, and that is why they are here on my list. I’ll always be a fan and more.
The Wurly Birds: always an amazing time. Their nostalgic feel-good music is just wonderful. They are some of the tightest, and I have never seen anyone not smiling ear-to-ear when they play. If you havent figured out, I LOVE to dance. These guys practically demand you to have a good time. I have yet to see anyone complain, nor have I ever heard a tiny piece of a song that I didn’t like even slightly. SEE THEM.

It almost goes without saying, but The Non will always remain one of my favorites of all time. There are SO many great bands here, lile The Electric Primadonnas, The Samurai Conquistadors, The Jonbear Fourtet, Skating Polly, The Boom Bang, Kite Flying Robot and many more. GO SEEM THEM ALL!!!

4) Top five favorite non-local bands?
1) Broken Social Scene – The best description of how music is for me, is how they view music. It’s all about collaborating, writing, sharing times and stories, and creating solidarity among the music industry and even just in the world itself. The one and only time I have seen them, they played for three hours and included performances of other band mates projects, which I thought was one of the coolest things I had seen a band do.

2) Logh – A Swedish band that when I heard the first song by them, it changed the way I viewed music forever. The song “Yellow lights mean slow down, not speed up” creates its own environment. I realized that’s what I want to do with music.

3) The Strokes – They will always be in my top. I just love everything they put out. Also very nostalgic with their timeless sounds, even recording has certain qualities that are very throw back. Hell yesss.

4) MEW – Constantly keeping me engaged in what the hell they are gonna do next in every song. Time changes, key changes, song changes, everything they do is straight ear and brain candy for myself.

5) The Books – They do whatever they want to, and as always, in The Books fashion, it’s on their own time, in their weird way of writing music, it’s addicting and so refreshing to listen to. They inspire me to not give a damn about even my own normal writing processes and to just flow with whatever is in my head. I like that.

1) Neil Gaiman – Cuz he has one hell of an imagination and is a fantastic story teller.
2) Jack Kerouac – I love the way he writes specifically, “The Dharma Bums,” the way everyone has an alias and all of these crazy monumental changes are happening in the world and the way he tells it is great.
3) Wes Anderson – Even though Rushmore is my favorite, he has not made a film that I didnt like, and his direction and timing is perfect. Also, I love dark comedies, and he really knows how to make those almost too well. yes.
4) John Carpenter – I mean, do I REALLY have to say anymore? Hell naw.
5) Eric Gorman – My Choc! Honestly though, I love his eye for creating interesting and sometimes dark images. His new comics and art pieces are really crazy using cardboard and things. He kicks it. Get that comic!!!

Stumbleupon. It’s just the best for every reason.

I love me some Belle Isle. That is for true up the spizzy spat. I ain’t ever had a bad time with fritz and the gang.

Mid Del Taco in Del City. Cheap food, damn good. Been going there for 10 years and I still can’t get enough.

10) What projects are you working on right now?

Feathered Rabbit is in the process of recording our first EP right now and are playing at The Blue Note on Aug 5th with MOON and Wolves, Where?, and Aug 9th at The Deli with The Tracy Reed Band.

Junebug Spade is about to release a new EP that we are almost done with. We are playing with DEERPEOPLE at The Opolis on the 29th[ED: That’s today, good people! Get out to the show!]
.
MANNACHINE is also working on new material and we have a couple of shows coming up including a Halloween show: Schwarzstock Presents-Fright Night Halloween Bash with Colin Nance. We are also doing a “Summer Fever” set which is stupid good.

Larry Chin is working on a new concept album about dream exploration called “New Adventures of the Oneironauts.” It is the sequel to a previous Chin album called “The Misadventures of Larry the Oneironaut.” I am working with a lot of great musicians too on this one: Sam Welchel, Isaiah Sharp, Pete Seay, and Eric Gorman, Blaise Thompson, Crosby Bray, Dustin Maynord and more. I’m REALLY excited about it.