WHY is OKLAHOMA CITY 7th in the NATION FOR MURDER? 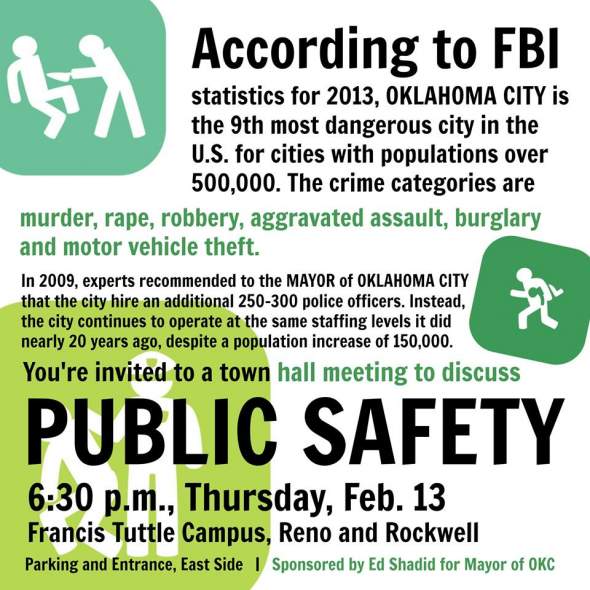 According to 2013 data compiled by the Federal Bureau of Investigation, Oklahoma City is the 9th most violent city in the nation for cities with populations greater than 500,000. Detroit came in first followed by Baltimore, Memphis, Philadelphia, Washington D.C., Indianapolis, Milwaukee and Columbus, Ohio. Houston was 10th. Oklahoma City also ranked 7th in 2013 for murder. In 2012, the city saw a 46 percent increase in homicide.

Meanwhile, the FBI ranks Austin as the third safest city in the nation.

The rankings are determined based on per capita incidences of murder, rape, robbery, aggravated assault, burglary and motor vehicle theft.

How did we get here?

Mike Walker, a nationally-recognized law enforcement consultant and graduate of the prestigious Wharton School of Business, will answer that question at a Town Hall Meeting on Public Safety next week. The meeting is scheduled for 6:30 p.m., Thursday, February 13, at the Francis Tuttle Campus at Reno and Rockwell. (7301 West Reno Avenue, Oklahoma City, 73127; Phone: 405.717.7799).Â  Attendees may park and enter on the east side.

Walker conducted a public safety study for the City of Oklahoma City five years ago. In a 2009 presentation to members of the city council, Walker outlined how the city was woefully understaffed with police officers. According to Dr. Shadid, Ward 2 Councilman, Walker recommended the city hire an additional 250-300 police officers. The city ignored the recommendation and continued to operate at 1996 staffing levels despite a population increase of 150,000.

â€œWe chose the Reno campus because of its close proximity to one of the most crime-riddled areas of Oklahoma City,â€ said Shadid who is running for mayor.

Shadid, who is running for mayor of Oklahoma City, will also speak.

Walker has nearly 30 years of extensive experience helping public-sector clients improve their organization, management, and operations. He has conducted studies for more than 75 local and state governments, including all aspects of law enforcement operations. He is a graduate with honors from Williams College and holds an MBA from the prestigious Wharton School of Business.

State governments Mr. Walker has served include the Florida departments of State and Highway Safety and Motor Vehicles; the Indiana Family and Social Services Administration; the New Jersey departments of Military and Veterans Affairs and Health and Human Services; and the Florida Highway Patrol.

Before joining Berkshire Advisors, Mr. Walker was for seven years the leader of Towers Perrinâ€™s General Management Services Public Sector Practice. Prior to becoming a consultant, Mr. Walker worked for the U.S. Department of Health and Human Services; the U.S. departments of Energy, Labor and Agriculture; Prince Georgeâ€™s County, Maryland; and Philadelphia, Pennsylvania.