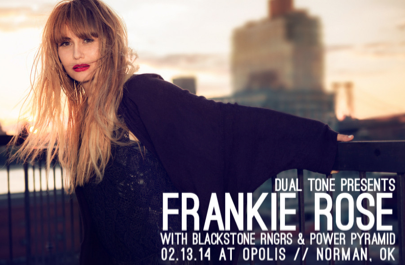 The enchanting Rose played with beloved garage rock bands Dum Dum Girls, Vivian Girls and Crystal Stilts before striking out on her own in 2009. She released her debut album as Frankie Rose and the Outs in 2010, following that with Interstellar in 2012. The latter – highlighted by singles “Know Me” and “Night Swim” – landed on many year-end lists and earned a Best New Music distinction on Pitchfork.

Last year, Rose returned with her third full-length album Herein Wild, which was greeted with similarly positive reviews. Her stop at Opolis comes in the midst of a national tour with British rock band White Lies. In 2013, she supported seminal Scottish indie outfit Franz Ferdinand on its U.S. tour.

Tickets for Frankie Rose’s show are available for $10 in advance at Ticket Storm and $12 day of show. The show is presented by Dual Tone, a design group and website covering music, art and home.