Last month Marvel announced it would be going in a new direction with Thor; the new wielder of Thorâ€™s hammer, MjÃ¶lnir, is female. Â Apart from Wolverine, Thor is the next best personification of machismo in the Marvel universe so in replacing the ale drinking manâ€™s man of a god with a woman seems like a strong step for female characters. Especially in a medium thatâ€™s been condemned for its use of women as little more than sexy plot enhancers. Most mediums are guilty of the practice, but comics have been criticized for doing so without distinction in the past decade. Batgirlâ€™s new costume which is less sexy and more practical was revealed in the same month as Lady Thor and Black Captain America (itâ€™s just Falcon), steps which might be seen as progressive steps in expanding the comicsâ€™ readership.

The moves are temporary and feel a little more than cheap public relations plays meant to make both companies look progressive while pushing sales and satiating complaints of sexism. A few ignorant people will get angry and hardcore cosplayers might start sharpening their sewing needles, but I stand by my humbug. Â Jason Aaron, the writer of the new Thor is adept at writing complex characters as seen in Scalped and the creative team behind the Batgirl reboot of Cameron Stewart and Brenden Fletcher piqued my interest when they claimed they were going for a feel that, â€œâ€¦mixes the best elements of â€œVeronica Marsâ€ and â€œGirls,â€ with a dash of â€œSherlockâ€â€¦â€ in an mtv.com interview.

The titles are in capable hands but in terms of changing the roles of women in mainstream comics, the significance theyâ€™d make is superficial and motivated by taking your moneyâ€¦but still relevantâ€¦and probably will make a difference.

My humbug claim is losing confidence, yet still present.

The thought of a black Superhero growing up was unbelievable, Iâ€™m not saying unbelievable with hyperbole, but literally. I didnâ€™t think they existed and we didnâ€™t have access to comics that werenâ€™t popular so, no Milestone Comics, Black Panther, or Luke Cage. I canâ€™t remember seeing any major black Superhero till I read my brotherâ€™s Steel comic. I instantly thought of ways to make him better because I hated that he was a glorified sidekick, but still loved him.

Of course, when I heard of Spawn, I shit myself. That one is hyperbole.

Iâ€™m one of those people that think the greatest thing Â Barack Obamaâ€™s presidency has to offer is the image of a minority making it to the White House, spitting in the face of hack jokes and list of things nobody ever thought would happen. Itâ€™s superficial, shouldnâ€™t matter, but does.

There have been creators writing good female characters for years without any real attention given when the subject of feminism is brought up. For numerous reasons: the subject matter is too mature for the pliable minds of children, they arenâ€™t advertised as much as Superhero comics, most of the time they arenâ€™t Superhero comics etc. While lacking the mainstream channels Spider-Man, Superman and other â€œManâ€ heroes have, good female characters are still present.

Below is a list along with a brief synopsis of somewhat popular comics with central female characters you should be reading. Nothing extreme like Alison Bechdelâ€™s Dikes to Watch Out For, too easy like Brian Azzarelloâ€™s ongoing Wonder Woman run, rather books I found interesting and left a lasting impression on me. Â Enjoy. 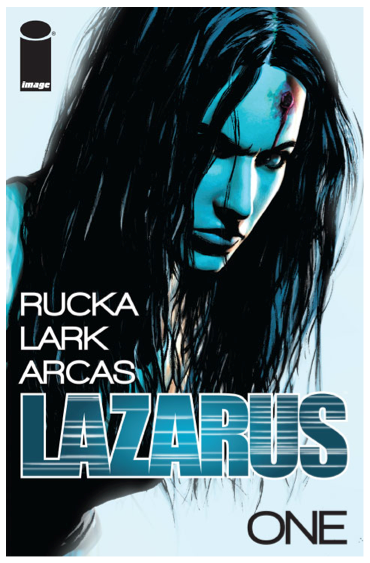 In the not-so-distant future, the world is ruled by different families in a feudalistic manner. Each family has territory, serfs, wastes, and their Lazarus. The Lazarus is the family’s guard, protecting its interest from threats within their territory and from other families. Forever Carlyle is her familyâ€™sâ€”the family Carlyleâ€” Lazarus, built to be near invincible thanks to genetic engineering and meticulous combat training.

While the series is a thinly veiled critique on modern society itâ€™s also about Forever slowly growing a conscience as she realizes her familyâ€™s interests might not be the best. Forever has also been fighting for her fatherâ€™s approval since sheâ€™s been a child training and it never gets old to see a trained killing machine that just wants her daddyâ€”family patriarch Malcolm Carlyleâ€”to like her. Daddy issues might not be original, especially amongst female characters but itâ€™s entertaining and a little poignant with Greg Ruckaâ€™s writing and Michael Larkâ€™s art. Greg Rucka has proven many times before how respectful and careful he is at writing realistic female characters with tenures in Gotham Central and Batwoman all without falling into obvious tropes. 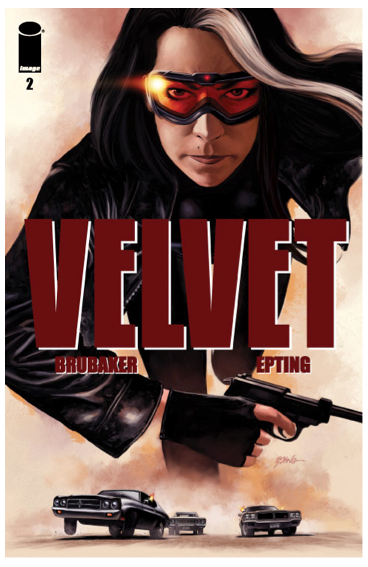 When the word spy is brought up the first thing that comes to mind is Ian Flemingâ€™s James Bond, who we can all admit is a terrible spy; he blows his cover always. Next to that, seasoned readers know the realistic works of John Le Carre, Graham Greene, Robert Ludlum and others with their chiefly flawed male characters. Â Youâ€™d have to do some searching to find any female protagonists employed for a shadowy organization or government in any of their books, which is surprising because there have been quite a number of female spies according to history.

When the worldâ€™s greatest spy is killed, former spy now secretary Velvet Templetonâ€™s curiosity gets the best of her as she tries to investigate only to be framed for murder. Templeton goes on the run to clear her name while solving the murder in the Cold War era of theâ€™ 70s. Velvet might be a great spy, but sheâ€™s not immune from the pitfalls of espionage, as someone trained to be a hidden instrument of the government and international manipulator there is the constant feeling of paranoia and expendability. Velvet is an amazing spy but far from perfect. Brubaker stated when he began this series he was tired of women being the sidekicks to male protagonists and wanted to give the female spy a fair spin. Â I donâ€™t seem to care what gender Velvet is as sheâ€™s shooting bodyguards in the knees or sneaking into masquerade balls looking for the person that set her up, or remembering a fatal encounter with the love of her life. If Brubaker had an agenda for women itâ€™s almost invisible because he makes Templeton as human as an expensive yet disposable tool for an organization that will never give her the recognition she deserves for her efforts. 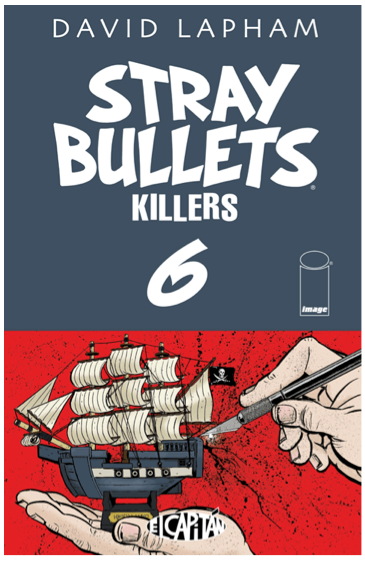 Iâ€™m an advocate of letting children watch and read some things that they arenâ€™t supposed to, within certain limitations of course. Rated R movies, some comic books, magazines, books, almost anything they can get their dirty little fingers on. Children are a lot smarter and stronger than some rating systems take into account. As a kid Iâ€™d watch any R rated movie I could find, if it was rated R, I couldnâ€™t wait to watch it. It gave me the feeling of learning things adults didnâ€™t want you to know about, the kinds of things adults hid from us kids. Finding out about them without their permission added to that sense of elation I would get.

Then I watch Pulp Fiction. It was eye opening in the sense that I never knew such films could be made as an art yet also disregard conventional rules. Also, I quickly understood why children had certain limitations. The first time I read Stray Bullets, I got that feeling again. The black and white art mixed with the most creative and original displays of violence and human suffering draws parallels to Jack Chickâ€™s religious tracts. Virginia Applejack is the series main protagonist and after witnessing two gruesome murders committed in a pedestrian manner her whole life changes. She becomes a runaway, forced to think on her toes and interact with unsavory people throughout the â€˜70s and early â€˜80s. Virginia is not a good person; as a matter of fact she has daddy and anger issues which come into play quite often. She also is a quick-witted survivor who doesnâ€™t suffer fools despite their age or gender; she defends her friends from bullies, outwits sociopaths and gangsters while escaping death, which happens often. This book isnâ€™t for a lot of people; a friend described its writer and artist David Lapham as a masochist, which I completely agree with. Â But in its center is a young girl surviving in situations girls arenâ€™t supposed to; the kind of girls who are usually waiting to be saved by a male figure. Â While sheâ€™s not a role model, one canâ€™t help but admire her independence and tenacity. Again, I canâ€™t stress this enough, Stray Bullets is not for everybody. 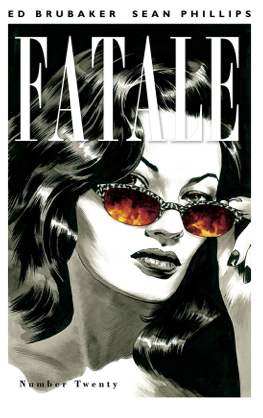 Itâ€™s established that the Femme Fatale is always evil; a beautiful seductress ensnaring any man foolish enough to answer her siren song, with legs leading directly to hell. But why is she evil? I have seen many an article on the sexist nature of Film Noirâ€™s portrayals of the sexually-liberated woman and none of them have been as entertaining as this book nor have they answered that question.

The story follows Josephine a Femme Fatale with the supernatural ability to bend the wills of numerous men. She uses and destroys the lives of men she comes in contact with, leaving some dead or still dangerously obsessed with her instead of fixing whatâ€™s left of their shattered lives. Sheâ€™s also chased through history by an ancient cult that reviewers have described as Lovecraftianâ€”the leader is a powerful tentacle faced monster who worships an even tenticlier â€œancient as timeâ€ godâ€” and has no real control of her powers. Jo uses the men to protect her from said cult as she attempts to figure out how to rid herself of the cult and her ability, which is more of a curse than a blessing.

No team in comics is better to deconstruct the Femme Fatale than noir enthusiasts Ed Brubaker and Sean Phillips, who have worked on numerous noir inspired series with Criminal being a personal favorite. Instead of falling into the trap of making a pristine female lead Brubaker lets us see that â€œJoâ€ destroys families and brings death to the innocent and undeserving. But he also lets the reader know the burden of power Jo didnâ€™t ask for as she does what she has to when fleeing evil. Then thereâ€™s Sean Phillips always ‘hard art’ working with shadows and giving us amazing facial expressions, but really his covers take the cake. Â He draws Josephine equal parts Ava Gardner and Lauren Bacallâ€”R.I.Pâ€”in seductive yet threatening poses combined with foreboding backdrops. The mixture of supernatural horror and noir work especially well bringing to mind movies like Angel Heart and Fallen while giving us a glimpse into the far from perfect life of the girl all the boys like. 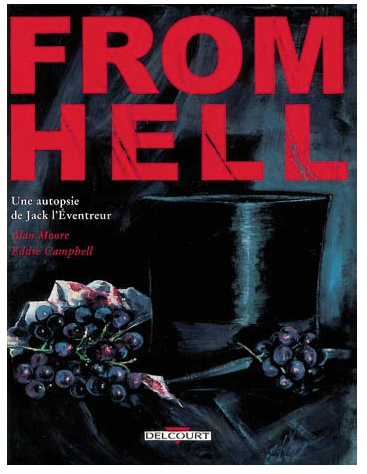 I didnâ€™t think Johnny Depp movie based on the book was bad, I liked it. Then a couple of months ago, I read the source material, and like Watchmen and other adapted Alan Moore books, discovered a lot of integral material is left out. More than just a murder mystery with a hint of conspiracy, From Hell is a portrait of Victorian England, exploring the type of society that would spawn the most infamous and elusive serial killer, Jack the Ripper. Moore does thorough research into what Victorian England was like for, well, everyone, especially prostitutes. The way the sex workers are treated is beyond repulsive closely mirroring the way prostitutes are treated now, except in 19th century England at a time known for its unrealistic and strict morals. Alan Moore is his usual matter of fact self with his in-depth research and notes at the back of the book, while Eddie Campbellâ€™s art is how I imagined Oliver Twistâ€™s life looks.