Clint Eastwoodâ€™s Jersey Boys is based on a wildly popular musical about the once wildly popular Franki Valli and the Four Seasons, doo wop singers from â€˜Jerzzy.â€™ The ingredients for Jersey Boys spelled success for the film, but anyone who watches Eastwoodâ€™s film version of the play will quickly guess that this movie will be less of a whopping success.

Itâ€™s not that the winning formula Eastwoodâ€™s ostensibly working with isnâ€™t there. We have the talent Frankie Valli ( John Lloyd Young, inadequate as a front man; but Eastwood works with what he’s got). Frankie has the loser, but hustling, friend Tommy (Boardwalkâ€™s Vincent Piazza) who gets him in the game and off the streets. Thereâ€™s the songs, the songs. The rags to riches and back down narrative that we donâ€™t mind hearing over and over again if itâ€™s about a great musician. Frankie Valliâ€™s roots were humble and quite hard. Heâ€™s willing to make a pact with the local mafia for a shot at playing more gigs. He does it with protection. Tommy and the other local hoods shield Frankie from the nitty gritty deals that make the band possible. Eastwood shows with dry humor how regular prison is to neighborhood life. 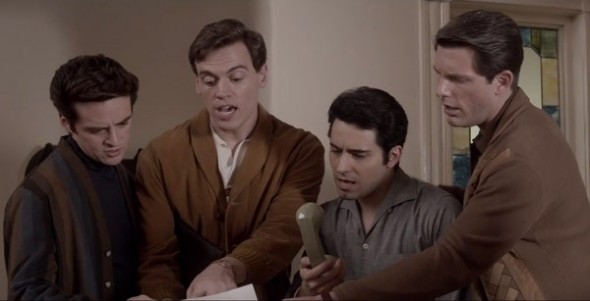 Studio possibilities donâ€™t start until the band meets Bob Gaudio (an excellent Erich Bergen). Tommy doesnâ€™t like himÂ because the â€œgeniusâ€ immediately demands royalties and threatens his control of the band. But the amiable Frankie draws the rare line in the sand and insists Bob stays. They practice together and Eastwood, like the Cohens did with Llewyn Davis, shows in a spectral, washed out gaze the magic of music coming together through people, melody and harmony. After the successful rehearsal two blondes approach Bob, shy and reserved, and ask him who his song was about. He tells them with zero tact: no one in particular. It can be any woman. Itâ€™s a device â€œT.S. Eliot called the objective correlative.”

That line was written by Marshall Brickman and Rick Elice and kept by Eastwood. Itâ€™s one example from many of how curious a director Eastwood has become. Matt Damon in Hereafter was teaching himself about Dickens, as the aging boxing manager in Million Dollar Baby tried to read Yeats. In terms of drama, Jersey Boys unfurls along scenes of people bickering and struggling to deal with each other more than it does on music, and as a result the music stands oddly behind these fast-moving, silly Italian American dudes. The tunes are fun, but donâ€™t have the hammy pleasurable jolt of Broadway, nor does the camera work have the now required intoxication of Scorseseâ€™s Goodfellas, a film to which critics insist on comparing Jersey Boys. Jersey Boys is not Scorsese, which Marty, an admirer of Eastwoodâ€™s J Edgar, would prefer.

Eastwood bashes different, particular personalities together so that he might see what would happen; many of these sketches are comic. The uncultured Jersey boys are taken to their gay producerâ€™s house party and run up against the arts community. A bookish songwriter must have honest debt negotiations with a mafia kingpin (Christopher Walken). The 4th wheel singer has to room with a shitty guy who uses whole towels to blow his nose. Eastwoodâ€™s camera hilariously pans to the mountain of towels. Â These comprise an older manâ€™s meditations on human character, not a director busily questing for a style — a quest that a Scorsese, a Sergio Leone, or a Tarantino may, at their midnight moments of doubt, find themselves stuck in.

Still, Eastwood calls his style of filmmaking something: â€œextemporaneous.â€ His way of cruising to events is why Jersey Boys looks different than say Walk the Line or Ray, films so planned to a T they inspired a Judd Apatow parody starring John C. Reilley. You canâ€™t parody Eastwood. 1. Heâ€™s Clint. and 2. Â Because like in his Republican convention routine where heâ€™s talking to the empty chair, you canâ€™t tell if he is trying to be funny or not. I had this confusing sensation many times during Jersey Boys and never considered it a bad thing. Just like I didnâ€™t consider it a bad thing that his chair routine somewhat sabotaged Mitt Romneyâ€™s evening plans.

The sheer amount of times the talentless Tommy Devito screws things up and pathologically drives his friends into debt is unusual and seems to truly challenge our patience with him. The first time you find out Frankie Valli is cheating on his wife is also the first time you see a family meltdown. The melodrama is turned up with such speed thereâ€™s no way we can catch up or know what to make of it. Â Thereâ€™s no build-up in tension with the actress.

The scene after that is a pivotal exchange between Valli and his daughter and it changes the mood of the whole movie. The abrupt story developments will leave viewers wondering why they should care about Valliâ€™s daughter, having just met her. But my instinct tells me Eastwood shot it like that because life happens like that. Problems develop without you seeing them, then they kick your ass. Valli goes from boyish to bewildered in no time. Tragedy strikes but itâ€™s handled with such tonal schizophrenia, distracting slow zooms and loud song interruptions, that we canâ€™t quiteÂ shed a tear. But we can when Bob Gaudio and his silly goateeÂ interrupt Frankieâ€™s public display of depression at the diner with a new piece of music. This is the man Frankie hired in the one willfull act of his life; someoneÂ who can help him stay in the war over art (not that debt ridden Valli has a choice). Eastwoodâ€™s keen and rather moving observation is that the artist has few allies, and even fewer opportunities to choose them for himself.

The scene in the diner with Frankie and Bob amounts to an illumination, a moment of clarity or goodness that emerges for the jazz musician after some minutes of thumbing through the scales and possibilities. Â With this approach Jersey Boys may not win Oscars but it presents once again a director who has subtle and beautiful music beating behind his breast. Since Unforgiven Eastwood has been riffing on themes of mortality, human frailty, politics, surveillance, homosexuality, ghosts, boxing, andÂ Vietnamese gang violence. He has done soÂ through anÂ obscure but direct chiaroscuro lens andÂ with a sensitivity thatâ€™s uncharacteristic of the mythology that made Clint famous, that of the gunslinger.

Woven quietly Â into Jersey Boys is a critique of the conventional ideas of manliness. Tommy Devito gives terrible advice about an Easy girl, and when Frankie sits down with her she gives him not only her voluptuous figure, but a solid piece of career advice (the last name must end in a vowel). The boys play their gigs muscling about, but itâ€™s not until a quality-obsessed gay producer works with the chief songwriter that â€œa soundâ€ is born. At a most self-conscious moment, Bob Gaudio is forced by his bandmates to lose his virginity in a hotel room, as he does so the Clint Eastwood-starring Rawhide is playing on the black and white TV.

Critics may see confusion in Jersey Boys. But if they look behind the mess and ease up on their own braininess a bit, theyâ€™ll find from Eastwood the same steady gaze, one that pierces theÂ stereotypes,Â surfaces and challenges of daily living. What he used to do with a .44 Magnum he now does with a kind of peaceful sad seeing. HeÂ finds out what people are made of.