Derek is out on tour with DEERPEOPLE. And if you’re like me, perhaps you found yourself spoiled a bit in having someone else reliably scour the Internet for new music each week. On the flip side, it’s led me to revisit some albums that will likely be on my list of favorites from 2014. Saintseneca’s Dark Arc being a strong contender for a top 5 slot, although there are others.

Regardless, the thing I appreciate about a good playlist is that it tells a story. So my favorite lists are laid out like stories made up of song titles. You know, it’s the sort of thing that leads to people arrange book titles into book-spine poems. Or arrange Taco Bell hot sauce packets. Or refrigerator magnets. 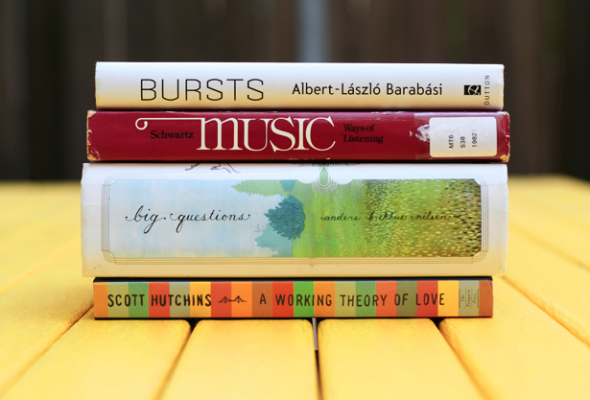 To that end, in this week’s playlist you’ll find an odd balance of sorts. First up is the section that features the talented ladies of Warpaint and Wye Oak, who has a guy member, but he’s not the vocalist really, so yeah. Moving towards the Y-chromosome end of the spectrum you’ll find Youth Lagoon’s contribution for The Space Project, which is a collection of songs, and then there’s new material from Papercuts’ latest album, Life Among the Savages. The last I didn’t discover until recently because I had somehow missed news of its release date.

Next week I’ll have another playlist out through SoundCloud with brand new music that’s been released recently or is set to release this summer, for example: people who like noisey walls of sound fueled by propulsive garage rock riffs and drumming and guitars maxed out on indie fuzz, ya, you should know that White Reaper‘s debut album is out with Polyvinyl Records on June 24th. They’ll be touring through OKC via the Conservatory on July 4th, <sarcasm on> which is not going to conflict with anything at all. Fireworks? What are those anyway. <sarcasm off> Honestly, if you’re free that night and you want to celebrate that freedom with good tunes, this would be the show to be at.

For the A+++ readers, a little bit more context on these selections and their place in the music landscape of 2014 releases, (don’t care? feel free to skip this part):

Warpaint: Warpaint -Â  It was released in January. There is something about hitting the mid-year mark that gets me thinking about all the music I’ve listened to. And this one gets a fair amount of play all these months later. And that’s got to be a requirement for any end of the year list.

Wye Oak: Shriek – Andy Stack and Jenn Wasner make up this established duo, and with their recent choice to use the bass guitar as their primary instrument of composition, it’s like the listener is on a journey of exploration too. I feel they could have chosen a sax, a theremin, or a thumb piano with this experiment in composition and probably still found a way to be innovative with any instrument. So take Wasner’s poetic, almost delphic lyrics in stride with that driving beat, and it’s a mesmerizing listen. Easily this album will end up somewhere in my top 3 by the end of the year. It came out in April.

Youth Lagoon: The Space Project – There are a lot of good compositions on this album from contributors such as Beach House and The Antlers, just to name a few. Each musical act was asked to take ambient space noise gathered from various Voyager probes and incorporate them into songs. Lefse Records put it out this year in March. I’ve heard the entire thing a few times now, and I still think Youth Lagoon’s “Worms” has been the strong favorite all along. It remains the sole reason I made the effort to hunt down this special 2014 Record Store Day offering as it’s truly the only thing I wanted from this annual exercise in retail insanity, but maybe I’m old and jaded and don’t want to wait in line at 6 a.m. after I was up till 2 a.m. the night before catching an album release show. Anyway, I walked away empty handed that day since I decided to sleep in, but as luck would have it a shop in Manchester still has it in stock.

Papercuts: Life Among the SavagesÂ  – Not sure how I missed this one, it came out in May. But once again I enjoyed it more than whoever rated it over at Pitchfork. And when I hear their lyrics as paired with music, I’d say more than a few songs on that album have a cinematic air to them. I don’t rate things with stars, vinyl symbols, or number point systems these days, I rate things with the following criteria: 1) would like to purchase it because I want to hear it a lot, 2) would go see the group if they passed through the metro, and 3) if I have played it so much that streaming it via Spotify, Bandcamp, or SoundCloud is eating up my data plan given how much I’ve listened to it on a trip to somewhere. And that’s it. Pretty simple.