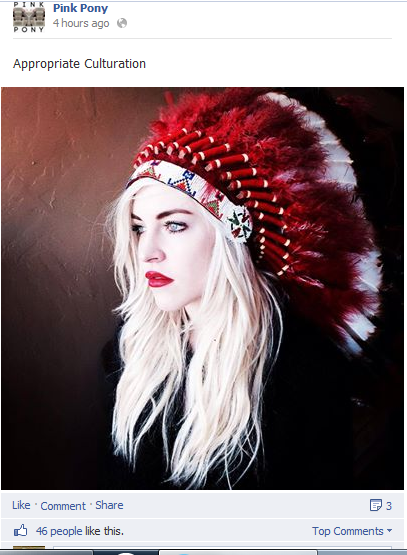 The initial feedback on the photo was positive, with comments stating the beauty of the photo. Eventually Steven Battles added the tag #appropriateculturation, in an effort, he states, to more appropriately frame the debate. 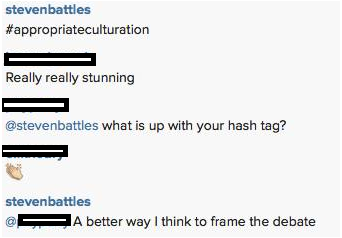 At the time of that tag being added there were no comments on Instagram (where their content can no longer be found) or Facebook that would necessitate framing a debate. All that would change very soon however.

Eventually as the photo was shared across social media there was both feedback and backlash from Native Americans and those empathetic to the issue of cultural appropriation. Cultural appropriation is the act of â€œborrowingâ€ from cultures not your own and appropriating them for your own use without knowledge or respect of their original uses or intent. This is typified in the Pink Pony photo as Christina Fallin flippantly wears a Native headdress that is traditionally reserved for Native Tribal Chiefs and not for members of unsigned Electronica bands.

Pink Pony was not unaware of this issue, as the title â€˜Appropriate Culturationâ€™ suggests. They posted this photo knowing full well that it would disturb those protective of their Native heritage and culture and yet they did it anyway. To make matters worse once the backlash began Pink Pony did not welcome debate as Steven Battles claims they were trying to do on with the Instagram hash tag #appropriateculturation. In actuality Pink Pony began a campaign to target and silence those that would disagree with them, a reality that they are taking great pains to hide from the general public.

This is a small sampling of the comments that were on the Pink Pony photo as of midnight Friday morning. They have been edited to remove identifying information, save for the author. 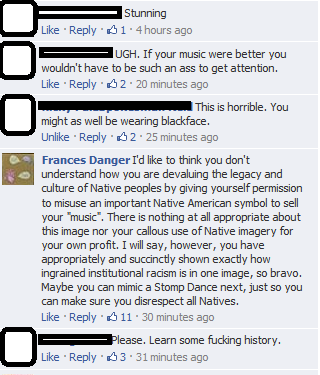 If you go to the Pink Pony page now those comments are gone, as is the photo. But it wasnâ€™t the removal of the photo that caused the deletion of the comments. Whoever was the Administrator last night on the Pink Pony page was deleting any negative comments; so much so that when they were done this was what was left: 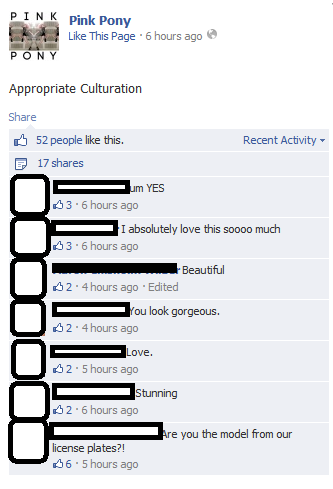 I had the honor of not only being deleted, but also banned from further comment on the page, all because I dared question why comments were being deleted.

I guess thatâ€™s one way to frame the debate.

Pink Pony issued a statement regarding the photo early this morning, explaining their reasoning behind the usage of the photo. Â In the press release the band defends the use of the headdress, stating it was done with innocence and respect. There is no apology for the misuse of a sacred Native cultural item and, in fact, the statement dismisses the cultural significance by saying a woman in a headdress is beautiful.

Pink Pony is currently riding a wave of national publicity for this stunt (and a stunt it is). Pink Pony willfully and knowingly appropriated Native culture then silenced, and continues to silence, Native voices when it does not fit their particular narrative of how they wish to be perceived. Â This is an issue not only of appropriation, but entitlement and institutional racism. Pink Pony feel that they are somehow entitled to use this culture because â€œprettyâ€ overshadows the very real and very damaging disrespect shown to Native culture and ideals. Â If Pink Pony truly had respect for Native culture and saw them as people and not as props they would listen to the feedback, accept help to further their education, and issue a heartfelt and appropriate apology. Â Additionally, banning Natives from the discussion is indicative of their mindset in regards to Natives, i.e. â€œItâ€™s ok for me to wear your pretty headdress and feel picked on when you donâ€™t take it the right way so you should shut up about it and let me do what I wantâ€. Â Pretty it up all you want, but marginalizing and silencing Natives regarding issues of their own cultural heritage is nothing short of racism.

There is no room for debate where Pink Pony is concerned. Instead there is their canned press release and condescending and responsibility dodging answers to current comments on their page, stating they donâ€™t see race or gender, which ultimately dismisses and once again marginalizes the culture they are profiting from. Â Itâ€™s like someone gave them a book on how to act during a PR crisis and they chose to do the opposite. Iâ€™d laugh if it werenâ€™t so sad.

Pink Pony would very much like you to believe that this is an open and caring conversation, as evidenced by the last post on their page. Iâ€™d take them up on their offer to facilitate the discussion, but this Native is still banned for daring to question them.

As disheartening as this incident is I do take solace in seeing the amount of support there has been for those who were upset by the cultural misuse of Native imagery by Pink Pony. I reached out to So6ix Magazine, who has worked with Christina Fallin as a freelancer, and they reiterated that while Fallin â€œâ€¦ does indeed do outside business consulting for the magazine from time to time (she) is not currently and has never been employed by So6ix. Christina Fallin’s personal opinions and posts and those of her band, Pink Pony, do not reflect that of So6ix magazine. So6ix respects and supports Native American culture.â€ Josh Sallee, Â a local musician and artist, was initially misidentified as the photographer for this shoot. Â Sallee states â€œA photograph was released yesterday of a head dress claiming to be a part of one my photoshoots. That is not true and in no way does the picture represent me and in no way was the head dress used for my photos. I apologize to those offended by the image.â€

This distancing from Pink Pony is not an attempt to dodge what may be a PR nightmare for the band and those associated with it. Rather, I see it as those from the cultural majority recognizing the need for sensitivity and respect for cultures not their own and giving that respect without qualification or equivocation of their comments, showing that it can be done and that at this point Pink Pony is simply choosing not to. It is that kind of willful and dismissive attitude that changes what could have been a learning and growing experience for all into an examination of hurtful racial attitudes and just how far we have to go as a society to address those inequities. Starting the conversation doesnâ€™t excuse Pink Pony and their subtle racism, however. Only an acceptance of and learning from their ignorance can do that.

I contacted Steven Battles via the Chrome Pony Facebook page last night in an effort to get a comment regarding this piece. I would have done it through the Pink Pony page but as Iâ€™ve been banned I cannot send messages to the page either. As of press time I have had no response so the press release below stands as the Pink Pony response. 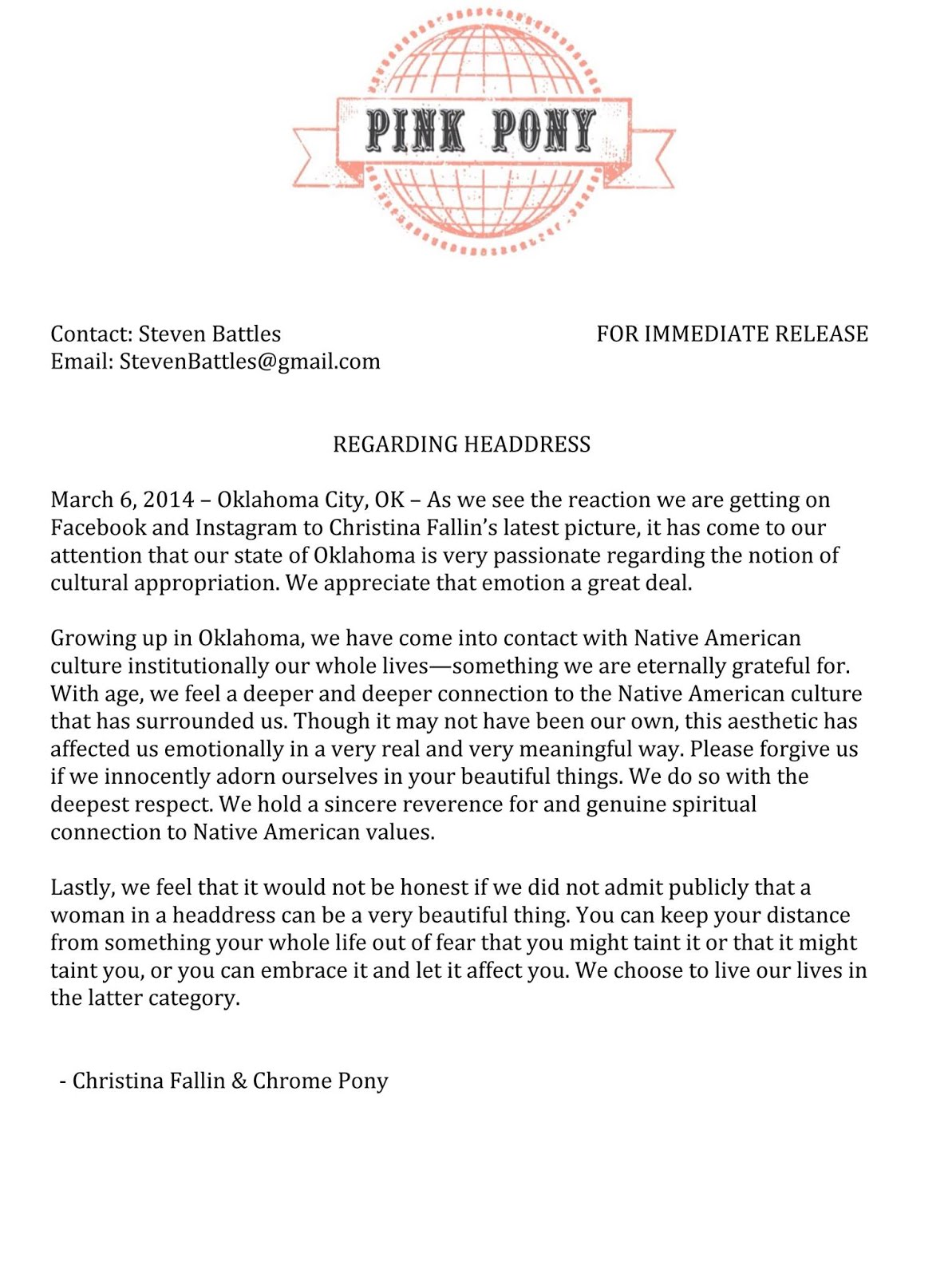