Frances Halladay is 27, living in New York City, but without much of a plan. What’s Â important to her is that sheâ€™s enjoying the day . â€œSo what are we going to do with our day!?â€ she says to her bestie SophieÂ while doing a hand stand. Sophie is played cooly by Mickey Sumner (Stingâ€™s daughter) in a way that has her easily dissecting , say, a rich boyâ€™s apartmentÂ for Frances — â€œThis apartment is very aware of itself.â€ Â Â Eventually Sophie, like most twenty somethings, has to become aware of herself too . She starts dating a finance man, someone the friends used to make fun of together by appropriating some hip hop-isms with his name, Patch. First Sophie moves out of their apartmentÂ and later gets engaged to the provider. 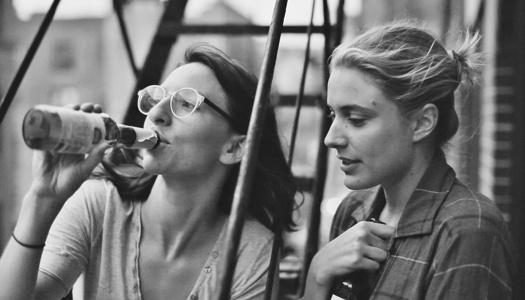 Frances adores her friend and takes the break-up hard. But being bouncy, she finds a guy at a party, Lev ( Girlsâ€™ Adam Driver). Frances is continually clumsy and hurled into comedic situations in this movie, but the jungle of the city requires craft nonetheless. She goes out on a date with Lev, where he shows her pictures on his phone of the cool mediaÂ jobsÂ he has had (â€œDo you know who his father is?” Sophia has alerted her). Frances pays for the dinner with Lev anyway. At home he makes a pass and with one funny bump of the shoulder Frances deflects his hand. The woman has defended herself in the wild city. As a reward Â she gets to live with Lev and his roommate, who develops an instant crush on Frances. Â Her required payment is postponed until she can pay full rent, but the place is expensive. Her only job is at the dance company, where she is an apprentice. Itâ€™s not even a guarantee that she will get paid for the Christmas show. But itâ€™s what she loves to do and she refuses to give up on it. Â From outside point of view shots we see she isÂ a spirited dancer, but notÂ exactly talented. 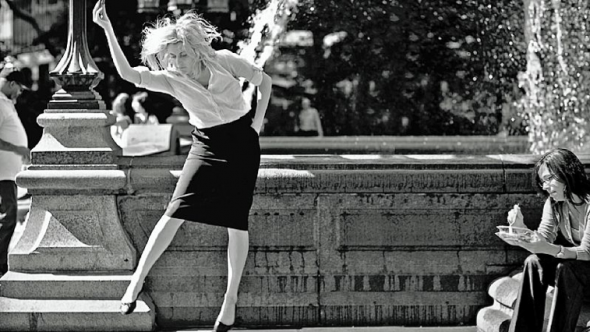 From here Frances wanders into Paris on a whim after talking about old friends at a dinner party; she heroically brings a copy of Proust to browse as she wanders the city searching for something about herself. After this jaunt and faced with the news that the dance company she works for only wants her to work behind a desk, she goes back to her old college where the current students tell her what she has been hearing all movie:Â sheâ€™s 27, but looks even older than that.Â Â She finally finds more work as a temporary RA and waitress/pourer. We get comedic dinner party gags when Frances is assigned to follow a Senator. On the flip side is a scene of great pathos. Frances, tired but never deflated, rounds the dorm hall andÂ sits next to a youngÂ student who is crying in the hallway. â€œIâ€™m just going to sit here,â€ she assures the student. Sometimes thatâ€™s all a person needs to do.

The director Noah Baumbach has noticeably found a muse in Frances. She is a collaborationÂ from the writing end betweenÂ the directorÂ and the actress that is Frances, Greta Gerwig. With somewhatÂ quick edits and with a roving camera, Baumbach has made a Spring-vibed picture in black and white, documenting life for young procrastinators (his audience in “Kicking and Screaming,” “The Squid and the Whale” and others). If his last movie “Greenberg”Â was claustrophobic Â inside Ben Stillerâ€™s acting outÂ palpableÂ depression, here we notice the fresh airÂ GretaÂ brings to this work.

The temptation for a critic, or an antsy reviewer, like me, who is inÂ his late 20s and not fully â€œrealized,â€ is to say Baumbach lacks the design imagination of his frequent collaborator Wes Anderson, or the heavy duty drama ambition of the great American director PT Anderson. That is, Baumbach never seems to write about adults, or at least not ones who arenâ€™t academic or artsy.Â Or even worse, the temptation is that if you are young, college educated, energetic, Â but creativelyÂ unrealized, a part of you doesnâ€™t want to admit that the movie on screen has figured your life out. Gerwig and Baumbach have the young hipster pegged as someone who has spent their paycheck right when they got it, dabbled in an art form, Â got ridiculous after four cocktails, broke up with a partner for reasons that seem like kind of an accident. The best and worst qualities ofÂ the hipsterÂ are exposedÂ when Frances gets finance guy Patch to buy the table a bottle of Belvedere vodka. Frances thenÂ gets mad at Patch and Sophie for being engaged and happy, and leaves, taking the bottle home for herself.

Ah, here was my life. How many times had I weaseled my way into a free show, or taken the beer from the fridge because I felt pretty secure in the fact that I had the right â€œspirit.â€ Â Â Like myself, Frances finds herself at innumerable social gatherings where her supposed peers are more together and making more money than her—largely because she Â has decided to live life by the day, and seems to pursue nothing useful. Â Like Frances, I have a project in my head.Â Â Hers is an evening of dance, Â mine, well, you know, itâ€™s still hard Â to put it into words, but itâ€™s there. Â Sometimes it’s hard to communicate that to society, and judging by Francesâ€™s table manners sheâ€™s kind of stopped trying to be understood. Â The company director at the dance center likes Francesâ€™ personality and offers her an office job; she doesnâ€™t want to take it but she may eventually have to.

In the grand history of cinema (Noah is a student), these may seem like quibbles. But Baumbach wouldnâ€™t be making this kind of movie if he didnâ€™t speak to these issues.Â AndÂ somehow â€œFrances Haâ€ is his most durable movie, and quite more lovely than the sum of these concerns.

For one, itâ€™s a natural portrait of that important thing: friendship. The chemistry between the two best girl friends cannot be faked. Like in the most together families, they seem to speak their own language. Frances interrupts a talk with her boyfriend to greet her friend calling with a â€œwassup!â€ that confuses the dude. Â The two girls lay together in bed and one can tell the other is wearing socks, and asks her to please remove them. When they break up Frances tries to play fight Â in the park with her new friend Rachel (“The Newsroomâ€™s” Grace Gummer). But outside the special world of friendship, such an act seems insane to Rachel, to the rest of the world.

Thereâ€™s an underlying melancholy that naturally follows Baumbach being a funny sponge, an artist who loves New York.Â A certain maturity of vision has shown him that money is pushing people like Frances, his people,Â out of the life there. She is barelyÂ humored at the dinner table by the lawyers and other dancers. Her friend likes their friendship, but doesnâ€™t see it as a reality. The men sheÂ hangs withÂ are making music videos and applying for SNL. When theyÂ are rejectedÂ they get to ask their stepdad for a loan so canÂ they can start drinking at 3 o’clock.

“SNL has gone down hill anyway.” says the roommate.

People have complained about Baumbach being confined to East Coast elite characters. Those kinds of people are here, but weÂ have a view from Frances’s world, which is a little different for Noah.

NotÂ unlike Annie Hall from Philadelphia, FrancesÂ has come to New York from aÂ distant land,Â Sacramento. Baumbachâ€™s vision expands when we follow the charming girl home. Her parents have holiday dinner, they reconnect. They ask how her life is in this otherÂ exotic placeÂ and she may lie a little bit.Â In the morning they go to church, where Frances falls in and sings with the rest of the congregation. In the past, Baumbach knows, people have come to New York from places like Francesâ€™sÂ hometown because they heard the call from theÂ Mad Ones (the beats) or the rowdy ones (Patti Smith). “Frances Ha” shows a New York where if the culture seekerÂ shows the slightest freedom of movement, she is giggled at. Â This entirely has to do with money, as David Byrne has written.

The personality in Frances is strong enough to let the duller characters bounce off her, though she doesnâ€™tÂ see thatâ€™s happening. Â Maybe sheâ€™ll get to realize her vision, or maybe she won’t. But the pointÂ is that there was onceÂ a city thatÂ opened itselfÂ to her. What makes up bohemia is not just the hip party or that Jay Z’s opened up an art gallery or theÂ mega successful conglomeration of artists and entrepreneurs. What made itÂ was the energy insideÂ the variousÂ people who came there, if not to beÂ major artists, then to be free spirits. 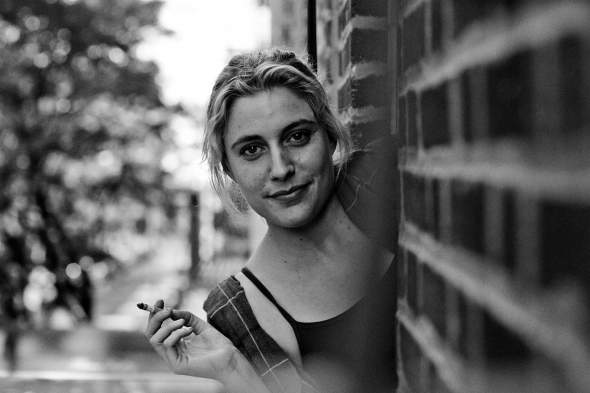 It’s noticeable that the characters of Baumbach’s former movies were together in theirÂ malaise, while hereÂ Frances Ha is alone in her joie de vivre, and having a harder time than the rest.Â If the scrappyÂ Frances is running the streets to Bowie music in solo enthusiasms (a French nod to Leos Carax), or flying to Paris where no one reads Proust anymore, itâ€™s probably because these places have less room for her kind: the great appreciators.Â Sheâ€™s very pretty, but financiallyÂ an outsider whom no oneâ€™s broken the news to yet because it would be awkward.

For all of Gerwigâ€™s sweetness, aÂ starving criticÂ like me almost wishes she hadÂ some of Leo DiCaprioâ€™s self-made fire from “The Aviator.” The scene where Howard Hughes is sitting uncomfortably at a table while the Hepburn family is talking about their various readings and communist causes and prejudices. The mother wonders curiously, why all this fuss? Since money doesnâ€™t matter. Â Hughes interrupts the family conversation, with aÂ plain wisdom now settling over Baumbach: â€œThatâ€™s because you have it. Money doesnâ€™t matter to you because you have it.â€

Yet, as Frances simplyÂ takes out another credit card, we see money isn’tÂ going to stop Â her. Whatever it isÂ she has, requires none too much maintenance.