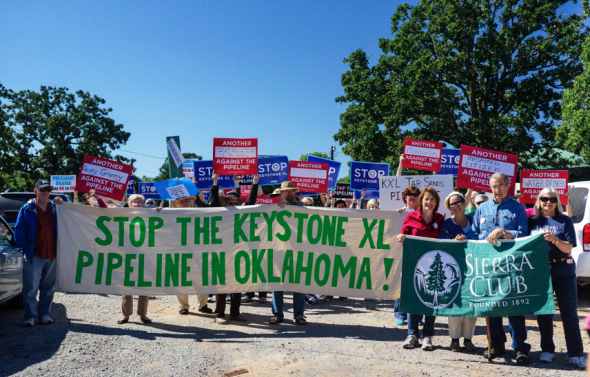 Spreading cream cheese across Panera bagels and decorating protest signs, eager and anxious environmentalists commune on the pavilion at Forrest Park in Stroud, Oklahoma.Â  This Sierra Club sponsored event to protest the building of the Keystone XL Pipeline drew approximately 80 activists from around the region, including leaders from Arkansas and Texas on September 21st. Their focus was clear: educate the public on the dangers of building a tar sands pipeline and send a message and group photo to President Obama, expressing how â€œtar sands is much more toxic and much more dangerous than regular crude oil.â€ (Barbara VanHanken, Oklahoma Sierra Club member)

From 9AM until Noon, four guest speakers spoke about topics on the process of tar sand extraction, the hazards of oil spills, the cost to tax payers, and the viability of alternative fuels.Â  VanHanken had two samples of oil: one with regular crude and the other with tar sands oil.Â  She explained how regular oil stays suspended in water and can be cleaned up easier with solvents, but tar sands oil is thick and sinks due to its viscosity and heavy metal content, rendering it impossible to clean out streams with solvents. 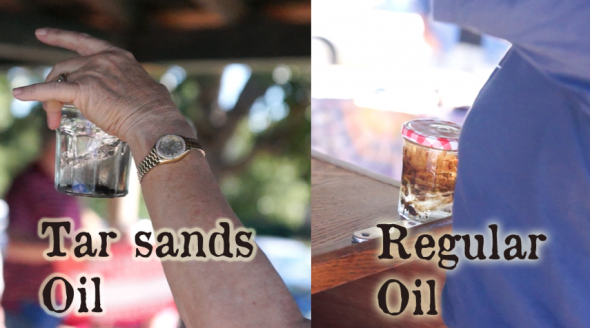 Kate Althoff, Sierra Club Leader from Arkansas, chimed in with her haunting accounts from the Mayflower, Arkansas oil spill earlier this year.Â  She recalled the spill first hand, as she lives a mere 20 miles from the site.Â  â€œResidents eyes watered and they had trouble breathingâ€ as the oil contaminated the neighborhood streets and Lake Conway.Â  Through her research, Althoff learned that the Pegasus pipeline that ruptured is 65 years old and, as it continues South, runs by Lake Maumelle, which supplies over 400,000 Arkansans with drinking water.Â  Had the spilled happened there, it would have been catastrophic event. That’s almost half a million people cut off from water services. When the Pegasus ruptured, it was running at a pressure of 708 psig (pound-force per square inch gauge), which is below the maximum limit. Â The maxium limit on a pipe in excellent condition is 820 psig.

According to an article by Lisa Song,Â  â€œthe fact that the Pegasus ruptured while running below maximum pressure â€˜is not good,â€™ [Richard] Kuprewicz said, because it means something was wrong with the pipeline’s integrity management. Pipelines are supposed to be safe even if they operate at slightly above the maximum operating pressure, he said, so the Pegasus line â€˜failed at a negative safety margin.â€™” And even with these guidelines in place, tar sands pipelines can run up to 1400 psig at times.Â  Imagine the potential for ruptured pipes at that pressure if pipes like the Pegasus can bust at 708 psig!

Appalled by the facts, the group gathered their signs and banners and began to march to Keystone XL pipeline just East of Stroud.Â  Being the calm autumn morning that it was, the crowd looked a little out of place in this quiet country town.Â  Certainly from between Venetian blinds, the eyes of the town peeked on the progress of the protest group.Â  The lone policewoman and two highway patrol cars circled the protest as it moved from the side streets to Route 66.Â  Several protesters questioned whether the law enforcement was there to serve and protect the activists or the oil companies.Â  The honestly, from an objective point, the answer is both.

Approaching the pipeline, one might barely notice it since it is buried and only marked with short poles and small yellow signs, a mild warning that there is an oil pipeline below.Â  However, the scene becomes eerily disturbing as you follow the freshly packed earth back into the forest, which has now been gouged by a tractor tree-cutter to clear the pipeline path. Â The yellow warning signs dot the path through the forest, which resembles the decimation you might expect to see from Fern Gully or Avatar. If you were a 90s kid this ought to bug you especially, since Captain Planet would totally disapprove. Were you feeling extra inquisitive, itÂ  might even be possible to follow these yellow signs all the way up to Canadaâ€¦thatâ€™s if youâ€™re feeling a little adventurous and can walk the 1000 miles to Hardisty Terminal. (Hey, Canadians, we’re on to you! Also this is more info about the difference between tar sands oil and regular oil. You can skip down to environmental issues to see what it leeches into the environment. Thanks, Wikipedia!) 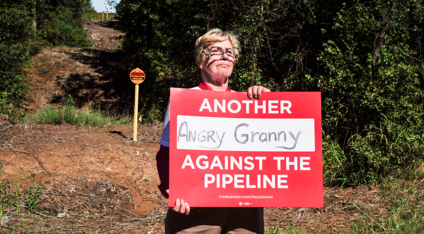 At any rate, protestors lined up for a group photo on public land right in front of where the pipeline passes under Route 66, careful not to step foot on land owned by the oil company lest they be legally bullied for their transgression.Â  Trucks and motorcycles stream by; some honk, others yell.Â  A motorcade of four limousines drives past, and one canâ€™t help but wonder if they were going to funeral or a boardroom meeting? Which seemed the most likely given the current climate that day?Â  If a tree falls in the forest or a protest marches in Stroud, OK, does it make a sound if no one is around to hear it?Â  Only time will tell whether or not the Sierra Clubâ€™s demands are heard by President Obama, or if he will only meet with special interests to determine the fate of a community.

All photos by Brandon Isaak.

More information about the Oklahoma Sierra Club chapter can be found at their website: http://oklahoma2.sierraclub.org