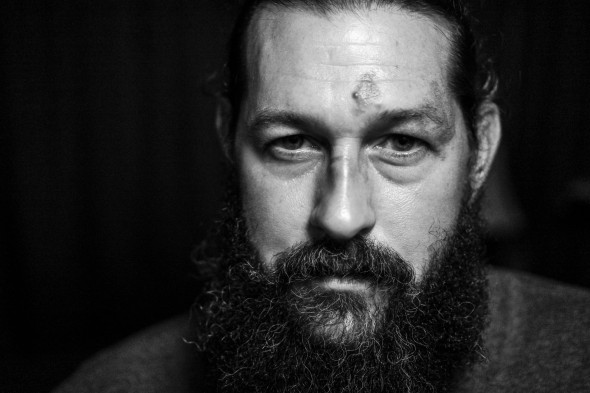 Robert Spencer has been writing over half of his life. He is part of an inimitable community of Oklahoma artists who knock glasses on the weekend, collaborate and uphold each otherâ€™s artistic endeavors. Musicians like Shilo Brown (also known as Bloody Olâ€™ Mule), Ryan Lawson and Brad Fielder, painters like Chris Johnson and Rawb Carter and many others flock to the mobile home Spencer shares with his longtime girlfriend LaNita in rural Choctaw, Oklahoma for boozing, bonfires and D.I.Y. art and music showcases.

Itâ€™s the day of the interview. My photographer and I are navigating the rough country roads to Spencerâ€™s place. At one point we must yield to a collection of cows and horses leisurely crossing the road. A reedy geezer in a stained wife-beater directs the crowd of animals to the other side of the road and waves us on. Once we arrive, we are waylaid by a pack of affable dogs at the gate. Spencer invites us into the trailer from the front porch and promptly offers us each a cold one. Itâ€™s hard to believe once weâ€™re sitting in the kitchen that we are in a mobile home at all. LaNita has painted a Gustav Klimt inspired fresco of a sprawling tree on the front door of the trailer. It is embellished with cool aquamarine stones and placid hues of green and blue paint. A faithful rendition of a clear blue sky has been painted onto the living room ceiling and gives the viewer the feeling he is gazing into the dome of some hallowed chapel. We retire to the Spencerâ€™s library, complete with a full service bar, fireplace and a striking yellow-and-black compass LaNita has painted across the center of the floor. We settle in with a drink, and I begin my questions. 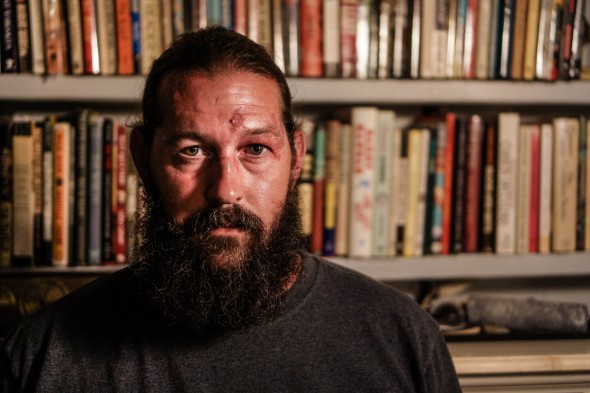 okc.net: What got you writing, Bob?

Spencer: Well, originally I wanted to be an artist. I took an art class in high school. All my friends were good artists and I just realized that I justâ€¦couldnâ€™t. I took art for almost four years and I didnâ€™t improve. I had all these things in my head but I could never do it, you know, so I guess in a way I just ended up painting pictures with words.

okc.net: Do you have to get into a certain head space to write your poetry?

Spencer: Sometimes Iâ€™ll go long periods without writing at all, then all of a sudden itâ€™s kind of like a flood where Iâ€™ll write for weeks or even a month or a couple of months. Every time I hadnâ€™t been writing in a while, I start writing again and it starts coming out I think, â€œWhy havenâ€™t I been doing this the whole time?â€ Then eventually it kind of runs out. It does that every time. Eventually, I just got this other stuff Iâ€™m doing and the well runs dry for a while. But I never think of it as writerâ€™s block. It just comes back around later. I feel like the periods of time Iâ€™m not writing, Iâ€™m gathering information thatâ€™s going to come out in some sort of way later.

okc.net:Â Who have you been reading lately?

Spencer:Â Annie Proulxâ€™s “Wyoming Stories 2,” some stuff by Barry Hanna and Harry Crews. I donâ€™t read much poetry. I read more short stories and novels and those are more my influence, but Iâ€™m into writing more compact [pieces]. Poetry is just the way it comes out for me. I donâ€™t know if itâ€™s an A.D.D. thing; I like to write something and Iâ€™m done. I donâ€™t really know, but all I know is I donâ€™t read a lot of poetry. Iâ€™ve read some of Charles Bukowski, and Iâ€™ll read some poems in his books, but I might not read a whole book of his poems. But Iâ€™m actually more influenced by his novels and books of short stories.

okc.net:Â What personal experiences in your life have influenced your writing?

Spencer:Â This is going to sound so mundane, but bad breakups that influenced poems of mine like â€œWinnie the Pooh and Tigger Too.â€ When I originally wrote that poem it was less funny and more angry. I let it sit for a while and when I came back to it for a while I started taking things out of it. It was about a girl I lived with for over a year and she had a Winnie the Pooh and Tigger Too tattoo right above her ass. That part was a true story. In a way it started out kind of a revenge type poem, but I turned it into a more interesting poem by taking a little bit of the meanness out.

okc.net:Â The title of your first book was “Slam it Up Your Ass.” Is that a reference to how you feel about slam poetry?

Spencer: It was derogatory at the time. Now I just donâ€™t give a damn. Iâ€™m not into it but I donâ€™t care if other people do that. Itâ€™s not what I am doing. It was the time period 2003, and I just thought it was funny. I think there was a girl at the time who had a chap book out called “Slam,” which I thought was funny, you know, to call your book of slam poetry “Slam.” Pretty generic. So, that was actually why I called mine “Slam it Up Your Ass.”

okc.net:Â What is your advice for younger poets?

Spencer: If youâ€™re going to go to poetry readings, donâ€™t feel like the format with which people read, or slam poetry, that you have to do that. Iâ€™m kind of on my own path, doing what I want to do, and I feel thatâ€™s what other poets should do, and not go to poetry readings and think, â€œThis is what I should be doing.â€

When I ask Spencer about the new project heâ€™s working on (a full length album of his poetry), he seemed to grow a bit uneasy, stating that it is a work in progress. However, he graciously agreed to share something with the readers of OKC.NET.

The following poem is an untitled piece from Robert Spencerâ€™s upcoming album, which will be recorded by musician Ryan Lawson and some other of Bobâ€™s friends.

Sometimes, youâ€™re driven to do things you donâ€™t want to do.

Things that just donâ€™t make any sense at all.

Itâ€™s times like these that you question your existence.

loading heavy boxes into trucks for a measly minimum wage?

You have to make ends meet, someone has to do it you tell yourself, but why me?

doesnâ€™t even know an eighth of what you know about the job.

But, youâ€™re driven along hoping if you work hard youâ€™ll be rewarded. Â When the payoff

never comes you become a bitter person. Â Youâ€™ve spent half your life working for a company that donâ€™t give two shits about you. Â They would just as well flush you down the toilet and hire new, educated blood to fill your position. Â Youâ€™re old and your clothes are old and the young are so fresh and new and full of vigor and ideas on how to fix the company; and, although you know their ideas are dog shit you donâ€™t get a say in the matter.

You do your job counting the days to retirement hoping you donâ€™t get canned due to budget cuts. Â You realize that youâ€™re more expendable than the new hirees that are younger than your own kids.

The hate begins to build when these cool wizards have advanced above you or hired into a position you were next in line for. Â This animosity clings to you like a suit of tarnished armor and causes a chasm between you and your spouse, so that not only is your job shit but your home life is too.

Your better half leaves and gets the house. Â Your marriage of twenty-seven years is crushed into dust. Â Your heart turns to pudding and you grovel and plead, but sheâ€™s done.

Itâ€™s too late for apologies. Â

Your boss isnâ€™t very understanding of all the time you are taking off in order to stitch your life back together. Â Heâ€™s afraid heâ€™s going to have to cut you loose. Â He needs people that are going to give one-thousand percent. Â You tell him youâ€™ll work nights and weekends, but heâ€™s done.

The severance pay might get you by for a few months. Â Youâ€™re tired and the thought of starting over at the age of fifty-eight makes you sick.

Sometimes, youâ€™re driven to do things you donâ€™t want to do.

Things that just donâ€™t make any sense at all.

Itâ€™s times like these that you question your existence. Â