As a white writer who listens to mostly the same things over and over I feel silly writing about this record. But numerous inadequate social media discussions have forced me to make a statement on a topic you could pick 79 or 200 topics to focus on. Kanye says he is the culture, and as far as pop culture goes, he is indeed a central energy source: the celebrity spotters, the academy, the restaurant managers, the club-goer, the suburbanite, the ghetto mothers and fathers and growing sons, Radiohead and Bon Iver fans. They and more are listening. A more varied selection of energies go into thinking about Kanye, making him as interesting as he thinks he is, and giving him a right to be a public personality in America. As an American and as a Twitter user who follows one (his girl Kim Kardashian) and has 9.5 million followers, I believe he has a right to talk about himself on a pop record. This shouldnâ€™t make him a figure of worship, but deep intelligence in pop culture is near extinct. Kanye happenings totally monopolize music Web sites that want to somewhat critique society and experience art that has an emotional resonance. Discussions about his flawed personality on social media threads generally stem from our bizarre and historical puritan impulses. Another loud confessor, Jean-Jacques Rousseau, looked at his many haters and shrugged. â€œI may be no better, but at least I am different.â€ At any rate, Iâ€™ll try to choose one of the available 200 topics: the acceptance of the existence of rage and anger (social outrage and self hate), and the release of those things through the vessel of beauty.

â€œYeezusâ€ feels like a different record. In the rap game, you can be a “worker in the trenches” by spitting phrases about the mundane and important activities of your day, for example, Gucci Mane: â€œshittinâ€™ on all you hoes tonight; my bitch she needs some baby wipes.”Â  You can be rap royalty like Jay Z, who tells interviewers that when he raps about being the man in the hot tub with the champagne, heâ€™s not being disrespectful to the parts of his audience that canâ€™t do the same. Rather, by watching him they can become the success story in the hot tub. I find this outrageous and weird. Though I realize in many ways Kanye and Jay Z are buddies and come from the same mold.

Kanye seems really different in his respected field of work. The production is highly emotional in a personal way, itâ€™s club music, but the minimal, industrial break down of “Yeezus” feels like a heartbeat. Elsewhere heâ€™s not trying to make his listenerâ€™s feel cool, or like they are in the club with no worries. No his Danteâ€™s Inferno is peopled by women who are still trying to get next to him and Jay-Z, by private contractors in the prison business, making money off black people who might be doing time for weed possession, general assault, or some other violence that is a make or break activity in many forgotten American communities. Heâ€™s also looking across the basketball court at a women he knocked up in the past and samples Nina Simoneâ€™s cover of “Strange Fruit,” a song about lynching, as his back up. We may have better judgment than this, but there is no denying that it is different. Does the song have an extra emotional weight that moves us? Yes. Is he being true to his own experiences, which is celebrity now and not the American South of the 1950s? He is. Moreover, the tension between all this outrage he lets in and his natural ear for melody make every moment of this record listenable. In crafting the tension, he has thrown some thoughtful elements in with crude ones, and made it entertaining to the point where it is now leading entertainment news.

The album overall feels like a man â€œgoing through something.â€ People were angry about how Kanye handled himself in the wake of Hurricane Katrina. There was his infamous declaration: â€œGeorge Bush doesnâ€™t like black people,” but how is it we can get mad at Kanye for being outraged rather than really looking into the abyss that was Hurricane Katrina. Itâ€™s easier to get mad at Kanye, and he knows that and has fun with it. Throughout â€œYeezusâ€ he consciously crafts lyrics that will knock his listeners out of their comfort zones. To the Harlem Renaissance students who good heartedly talk about and worry over the double consciousness and Civil Rights, he offers: “Black girl sipping white wine, put my fist in her like the Civil Rights sign.” To those with no money who think they are living large, he writes â€œNew Slaves.â€ To those who envy and hate celebrity culture, he provides an intimate view of his celebrity life on the “My Beautiful Dark Twisted Fantasy’s” track “Monster,” wherein all the gifts of celebrity life end up making him feel less than human. On this album he also paints a picture of himself in total luxury when he raps â€œhurry up with my damn croissants.”Â  In my opinion he’s playing a character just as much as, say, Father John Misty has to the indie rock kids. Both artists are provocateurs. But somehow he has misplayed the Hunter S. Thompson style to where his character bears his own name. But the close listener will nevertheless find a satirical bite on “Yeezus.” 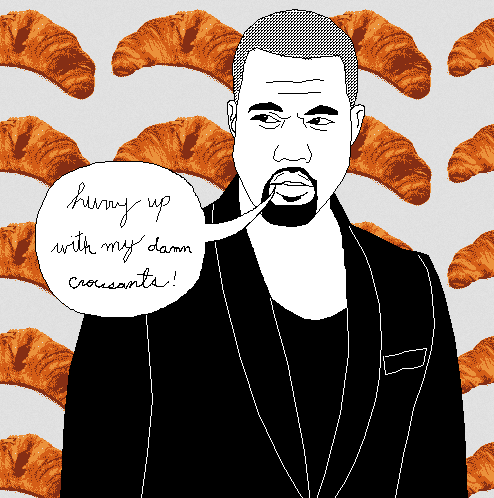 To be sure, Kanye seems mad all the time, to the exhaustion of a good deal of his audience. Though I wonder if listeners ever wonder if being a black entertainer might not always be the most ideal job, that it can be a challenging one, where if you crack the code the demand is high and it also has a historical weight. At the the root of Kanyeâ€™s enduring anger is his choice to rebel against what most of his audience wants. “Psalm 137â€™s” song of the exiles nails it, â€œand they that wasted us required of us mirth.â€Â  Even with his middle-class upbringing and all, Kanye stills sympathizes with that dilemma. He takes the fruits of happiness with an experiential fever, but he doesnâ€™t tell his audience how cool it all is. He canâ€™t simply give his audience that mirth.

There is plenty to be mad about. If thereâ€™s a critique to be had about “Yeezus” it is that heâ€™s not funny enough. The reference to Adam Sandlerâ€™s “The Waterboy” in â€œNew Slaves” brings me the biggest laugh. My guess is the thing that makes him the most mad is when â€œthose niggasâ€™ ainâ€™t doin shit.â€ There is a staggering amount of us who arenâ€™t doing shit, so it seems to me Kanye has found a good way to manipulate that group of us, and take our money. Is it Kanyeâ€™s job to clean up the prisons? No, he can only throw the idea pebble out there. Is it his job to be an exemplar of a fictitious American Royalty (a la Jay-Z and Beyonce). No, his job is to entertain, be an individual, speak his mind, be honest, and make beautiful music. He does all of those things.

At the end of â€œYeezusâ€ the listener is taken aback when the love song â€œRound 2â€ follows the emergency siren in a garage number â€œSend it Upâ€ (featuring Chicago south side rapper King L). It feels for a moment, like Kanye has been purged. The Ponderosa Twins Plus One sample sings from a soulful R&B past present in all Kanye’s records. West raps that he wants to mount on the sink the one girl heâ€™s following on Twitter.