Some of the best musical acts in Oklahoma played a benefit concert in Bricktown Wednesday night, but it wasnâ€™t the one airing on television.
Just a few blocks away from the Chesapeake Arena where Blake Shelton and friends were raising funds for tornado relief, Oklahoma musicians were gathering at the Bricktown Event Center to do the same. Dubbed Music4Moore, all of the ticket and merchandise sales went to the Red Cross of Central and Western Oklahoma.

It is hard to say who was the headliner, but acts included JD McPherson, Wanda Jackson, Parker Milsap, DEERPEOPLE, Sherree Chamberlain, Colourmusic, The Damn Quails, Desi and Cody, Travis Linville, Evangelicals, Beau Jennings and the Tigers, and Ramsay Midwood. All of the musicians donated their time to put on one of the best lineups Oklahoma City has ever seen.

At the same time, what had originally been planned as an free outdoor portion of the concert was moved over to the Wormy Dog a couple of blocks away to avoid inclement weather. The lineup included Skating Polly, Kyle Reid, Feel Specters, Jacob Abello, Graham Colton, Camille Harp and John Calvin, Hosty, Black Canyon, Taddy Porter and ADDverse Effects. 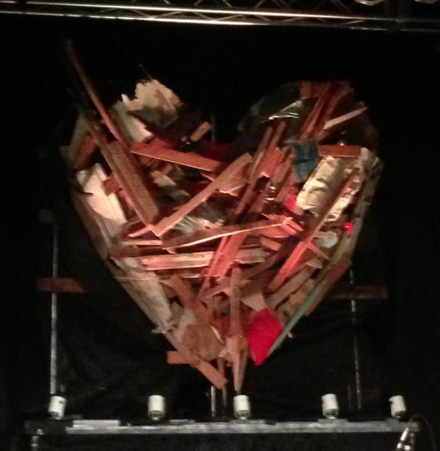 Set decoration above one of the stages.

Music4Moore had a lot working against it. The show was put together very quickly, with little time for marketing. It was a Wednesday night, with a major benefit concert going on in the same neighborhood, and it stormed. You couldnâ€™t ask for worse conditions, and it definitely affected the numbers. Still, between the two shows, about 500 people turned out, and it didnâ€™t hurt the quality of the music or the demeanor of the bands.

When I showed up soaked and smiling, I was met at the door by the sounds of Wanda Jackson belting. She was full of energy and sounded great. It was the beginning of a great evening. As she finished up her set, I grabbed a couple of beers and got settled in for JD McPherson.

We didnâ€™t have long to wait. The Bricktown Event Center had a stage on opposite ends of the floor, so bands could set up and tune during the other stageâ€™s set. There was almost no down time all night long.

JD McPherson did not have his usual five-piece band with him. Two of his bandmates, his upright bassist Jimmy Sutton and drummer Jason Smay flew in for the show. They played early in the evening, because they all had to catch a flight out for a show the next night.

JDâ€™s stripped down arrangement actually changed up the sound a lot from what fans would have heard on his album Signs and Signifiers or recently at the Norman Music Festival. Down a keyboard and guitar, it was a lot dirtier in a good way. You canâ€™t ask for more than three very talented musicians covering Chuck Berry and playing arrangements of songs they know by heart but havenâ€™t played in particularly that way before.

While JD McPhersonâ€™s set was winding down, I got a chance to catch up with Black Canyonâ€™s front man Jake Morisse, and ask him about the show. Jake was playing later over at the Wormy Dog, but heâ€™d come over to catch Wanda Jackson and JD McPherson. Between inquiring about his taste in terrible television shows, an inside scoop Iâ€™d been given by his roommate and fellow musician Garrett Dale of Red City Radio (Jake assured me that Garrettâ€™s tastes werenâ€™t any better, and mentioned Nashville and The Voice as examples), Jake talked about how great it was to get to use music to help out with the tornado relief.

â€œI wanted to help out in any way I can,â€ Jake said. â€œYouâ€™d have to be an asshole to say no to something like this.â€

Two beers and some great 50s-style rock in me, I decided it was time to brave the weather and make my way over to the Wormy Dog. I walked in to Camille Harp and John Calvin just starting their set. Harp and Calvin were splitting song duties and backing each other. Each played acoustic, and Harp was keeping time with a set of bells strapped to her boot. The music was great, so I opted to stick around at least through Black Canyonâ€™s set.

Mike Hosty was up next. Iâ€™ve heard stories about how great his one-man shows can be. Iâ€™d seen a couple of videos online that do not do justice, but live heâ€™s something else entirely. Playing his own drums, guitar and kazoo, Hosty ripped through some of the best-written and catchiest songs all night. The highlight of the set was â€œFraidy Hole,â€ a song about â€œwhere you go when youâ€™re scared and coldâ€ that featured a conversation between Gary England and Val Castor about a tornado mating with the Devon Tower. 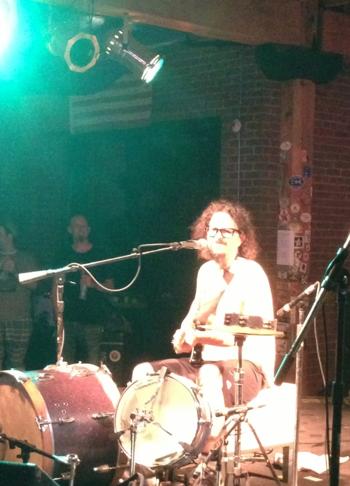 Black Canyon proceeded to dirty things up with the same bass, drums, electric guitar arrangement as McPherson. Jake kicked things off right breaking a string on the opening song, â€œHeap of Trouble,â€ the first track off their most recent self-titled album. Black Canyon is ostensibly a country band, but in the same way Uncle Tupelo was in the early 90s. Thereâ€™s as much punk going on as country. Tupelo tracks like â€œFactory Beltâ€ or â€œThe Long Cutâ€ would fit comfortably beside â€œWeary Handsâ€ or â€œI Had a Long Day at Work.â€ 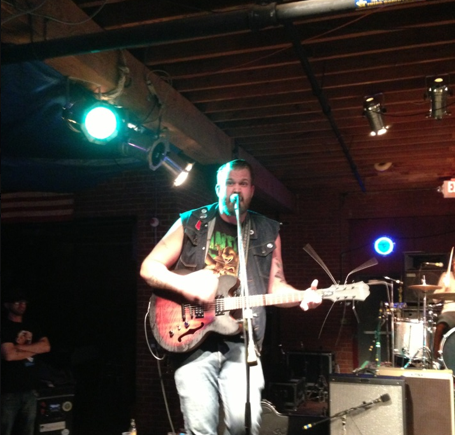 I made it back the the Bricktown Events Center in time to catch the last of The Damn Quails, a very tight country band out of Stillwater. Parker Millsap followed up with another guitar, fiddle and upright bass combo that kept the audience dancing. Millsapâ€™s baby face and straight-tie look juxtaposed his cutting vocals. The highlights of the set were â€œPalisade,â€ where Millsap got to show off his voice and a Bluesy piece adapting nursery rhymes.

Alas, I had to cut out as DEERPEOPLE were just getting ramped up.

The Music4Moore show is going to go down as one of those great concerts where more people will say they were there than ever attended, but for those that did make it, they couldnâ€™t have asked for a better lineup.