As if tornado victims in Moore and Shawnee donâ€™t have enough to worry about, there is a particularly nasty fungus out there, and people injured by debris are especially at risk. An outbreak of this fungus occurred in Joplin, Missouri after it was struck by an EF-5 tornado in 2011. The Centers for Disease Control is warning people who sustained injuries during the tornado â€“ and the doctors that treat them â€“ to be on the lookout for â€œnecrotizing skin infectionsâ€ caused by a certain type of fungi called Apophysomyces trapeziformis. This fungus normally lives a quiet existence in soil and on decaying plant matter such as rotting wood. However, when it finds its way under the skin, such as when a tornado victim is impaled with flying debris, it takes that opportunity to rapidly grow and spread. If untreated, the infection can have a mortality rate of up to 83%, depending on the severity of the infection, and the whether the person has other underlying medical conditions.

The infection caused by this fungus is called mucormycosis, and it can takes the form of an invasive skin infection that eats away at the flesh, causing it to blacken and die. (By the way, unless you have an especially strong constitution, I would recommend restraining yourself from doing a Google image search of â€œmucormycosis.â€) The fungus can enter the body by hitching a ride on flying splinters, or when dirt gets into cuts, scrapes and burns. It often starts out as a red wound with swelling, and perhaps a blister, but as it progresses, sometimes mold can be observed growing out of the wound.

When a tornado-survivor breathes in dirt and dust that are stirred up by the high winds, the lungs and sinuses can be infected. Symptoms of this type of infection include headaches, fever, sinus pain and coughing. The fungus can also spread through the blood stream to infect the brain and various other internal organs where it can develop into a â€œfungus ballâ€, which is exactly what you imagine it to be: a mass of fungal growth that is like a mushroom growing on your insides. (You are also advised not to do an image search for fungus ball.)

Under normal conditions, healthy people rarely come down with mucormycosis. The infection sometimes shows up in immunocompromised people, such as cancer patients, or people who have recently had an organ transplant. Usually, outbreaks of the disease are associated with a variety of natural disasters. Previous sudden outbreaks were observed after a volcano erupted in Colombia in 1985, and after the Indian Ocean tsunami of 2004. During these catastrophes, the great amount of stress that victims are under can suppress their immune system, and makes it harder for the body to fight off the exposure to fungal spores.

There is treatment for the infection if caught soon enough. A diagnosis of mucormycosis will be treated with antifungal drugs. The dead tissue in wounds will be cleaned out by debridement, and any fungal balls that may have formed can be surgically removed. Early treatment is the best way to prevent death and serious damage. After the Joplin tornado, thirteen people were diagnosed with mucormycosis and five died.

On the bright side, none of the volunteers who helped with the clean up effort in Joplin came down with the infection, and the fungus does not spread person-to-person, so any outbreak would be relatively small.

So far, the Public Health Department is not aware of anyone in Oklahoma that has contracted with this type of fungus, but doctors are still warned to be on the lookout. After the Joplin tornado, it took almost two weeks for the fungal infections to be identified and for the local health department to be notified. With extra vigilance after the Moore and Shawnee tornadoes, it is hoped that earlier diagnosis and treatment will reduce the mortality rate, if the infection is discovered in Oklahoma. 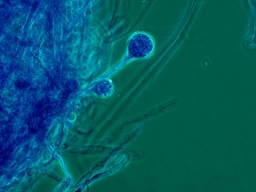