As with all road trips I participate in, our editorial voyage to Austin for the Annual Psych Fest started out as sort of a fiasco. I will spare you the details, but suffice it to say it involved a harrowing trip through DFW at not even rush hour, some inaccurate Google maps directions, and attempting to put up tents at night without flashlights. Still it was a good exercise in team building. Many songs will be written and sung about that saga, but not today. Psych Fest is organized by producers and curators,Â The Reverberation Appreciation Society, who also run a record label of the same name. Two members of The Black Angels, Alex Maas and Christian Bland, co-founded The Reverberation Appreciation Society and Austin Psych Fest along with Rob Fitzpatrick and Oswald James.

This year the festival took place in a field just south of the Austin airport. This results in the curious phenomenon of low flying airplanes zooming by fairly frequently. If you wanted to go camping for the rustic ambiance, you would be sorely disappointed. We got in and situated in time to catch the set by Danish noise pop duo The Raveonettes. I liked their most recent album (Observator), and what I’ve heard of them before, but having seen them live raised my level of esteem for them even higher. The charisma that comes across on Observator bursts into full Technicolor on stage. The propulsive drive of Sune Rose Wagner’s guitar work gives the constant feeling of barely controlled chaos, while vocalist/bassist Sharin Foo’s vocals and the duo’s sweet harmonies gave the noise a sweet pop finish. The effect is similar to Jesus and Mary Chain or The Vaselines or really anything from the C86 era of indie pop. I now have a crush on Foo, probably fitting in my hierarchy of rock star girlfriends somewhere between Jenny Lewis and Kim Deal.

After their fantastic set, we wandered around the concessions available near the stage. Like any event that draws a lot of people, commerce is not far behind. We noticed that there is a Whole Foods food truck. This boggles my mind. I imagine the yuppies of Austin dashing out into the yard on a hot summer day as they hear the Whole Foods Truck coming down the road, blasting NPR’s “The Splendid Table.” The happy sounds of legal secretaries asking â€œis this muffin gluten-free?â€ follows the Whole Foods truck wherever it goes. The Whole Foods truck was wildly popular, even though there was a Chicken and Waffles truck RIGHT NEXT TO IT.

For the headliner Black Rebel Motorcycle Club (trivia fact: they are named after Marlon Brando’s motorcycle gang in “The Wild One”. THANKS, WIKIPEDIA!), we used our press pass superpowers to get into the photo pit at the front of the stage. Since I am not a photographer per se, I probably shouldnâ€™t have been in there, but I did manage to snap a few terrible photos on my phone, thus fulfilling my contract with the public. Managing Editor Helen Grant, on the other hand, snapped some great stuff. I’m pretty sure the photo pit is her natural habitat. There were plenty of photographers in there standing back or to the side, clearly afraid to get into the scrum. Helen, on the other hand, will stand her ground. This is someone so analytical that I have witnessed her spend 40 minutes on a single okc.net Facebook status. It was like that moment when you first see a penguin dart through the water. 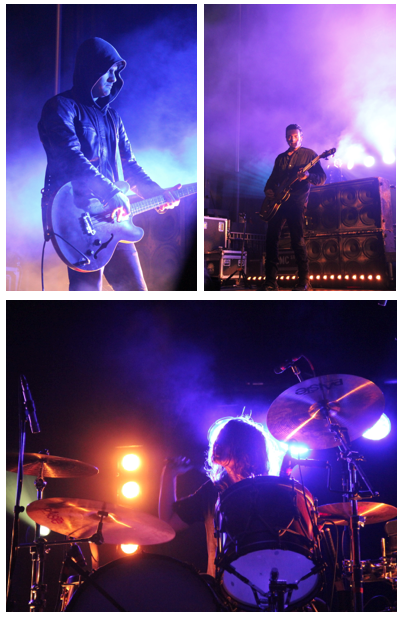 BMRC has mastered the art of stagecraft, oozing menace one moment and quiet contemplation the next. Bassist and frontman Robert Levon Beem somehow channeled both James Dean and Morrissey at the same time, while guitarist Peter Hayes, decked out in all black with a cigarette dangling from his lips, was projecting the maximum amount of Johnny Cash swag that anyone under the age of 80 is permitted to have. Drummer Leah Shapiro, who sometimes drums for The Raveonettes, had no trouble holding the whole mess together, and given how often her drum skills have come up in conversation since, I think she might be Helen’s new rockstar girlfriend. Their wide ranging set touched on moments from all over their already long and storied career, washing the enormous festival crowd in waves of sound, coming in their quietest moments close to shoegaze and in their loudest close to cowpunk. Appropriately they finished an epic set with an epic 7 minute psychedelic ballad. By this point, even the BMRC agnostics in the press tent were nodding aggressively along, and as I sat in the plumes of pot smoke and bubbles, being literally punched in the back by the force of the subwoofer (in a good way), it seemed to tie the night together in a tidy and satisfying way. As my co-editor remarked afterward â€œthat was fucking bad ass.”Â  I couldnâ€™t have said it better myself.

One comment to “APF6 Recap: Black Rebel Motorcycle Club and The Raveonettes”