Last week, the following image turned up in my Facebook feed. 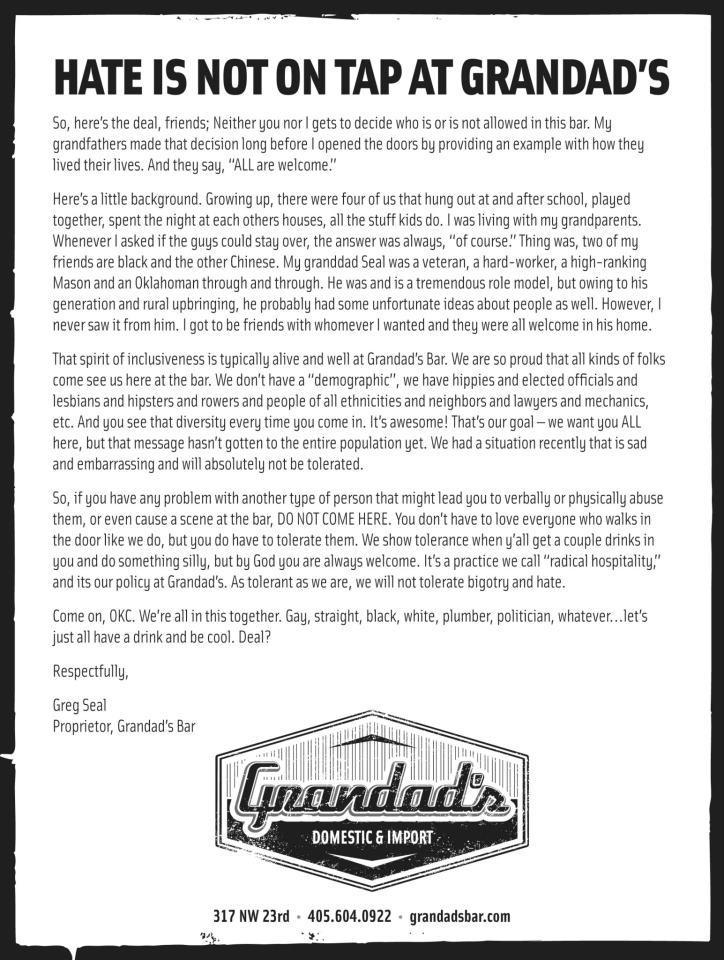 Advertisement in the Oklahoma Gazette

There was some conversation about it in my Facebook feed, but no one seemed to know what incident it referenced.

Well, Dr. Kurt Hochenauer over at Okie Funk made me aware of the rest of the story.

The Oklahoman had a story on it Saturday.

â€œA check of police records turned up an assault and battery report from April 6 that listed Roth as the victim.

According to the report, Roth and some friends were at the bar for a birthday dinner when a man started making anti-gay comments.

Roth and one of his friends at first ignored the comments but eventually decided to leave, he said.

They were followed out of the bar by the man who made the comments and two of his friends, who attacked them when they got outside, according to the report.â€

Allow me to say, loudly and with conviction, “what the hell?” This is really a shame. It is bad enough that a person can’t go out to a bar without being mistreated, but to follow someone outside and physically assault them is really terrible.

There have been other violent crime incidents in Oklahoma City where GLBTQ persons were targeted for their sexual orientation in the last year. In July 2012, a gay man’s car was painted with the word ‘fag’ and firebombed in north Oklahoma City. He received first and second degree burns in the incident. In August, a lesbian woman was beaten and attacked with a knife while her assailant told her “I’m going to make you straight” and “I’m going to kill you.”

Oklahoma has not made the same strides on gay rights other states have in recent years. One bright spot in recent memory was in 2011 when Ed Shadid proposed and got passed a measure for Oklahoma City to add sexual orientation into the city’s employment nondiscrimination policy. Predictably, Instead of hailing it for the step forward that it was, the Oklahoman ran a headline calling it a “controversial sexual orientation measure.” At the time, the Oklahoman refused to support or oppose the measure. The only editorial comment they had was bitching that Oklahoma County had done the same thing in 2005 without getting public input.

While this particular incident is rather obviously a hate crime, as Okie Funk points out, Oklahoma does not cover sexual orientation in its hate crime laws. I’m not entirely sure how federal hate crime laws factor into an incident like this. Federal hate crime charges were filed in an assault and kidnapping case in 2012 in Kentucky. This incident has many of the same elements.

In fact, a few weeks ago the Oklahoma House passed, HJR1009, a resolution reaffirming its opposition to gay marriage 84-0. Not a single person was willing to stand up in the House and vote against it. There were 17 cowardly abstentions, all but one of which was a Democrat. The Democrats who didn’t vote framed it as a walk-out in protest, but it’s hard not to notice that this tactic has the convenient side effect of keeping them off the record. Even worse, a number of the House democrats voted in favor. You can see a list of who voted and who didn’t here.

Nate Silver, the guy that really pissed off Republican pundits when he once again accurately predicted the outcome of nearly every election in the country in 2012, predicts that Oklahoma will be one of the last states to have a majority support for same sex marriage by 2020, just behind Texas and North Carolina.

Originally Roth didn’t go public with this story because he didn’t want to attract bad publicity for both himself and Grandad’s, but thanks to the Oklahoman that ship has sailed. Seeing as how Grandad’s are the good guys in this story, let’s hope that they actually gain some business over their public statement. If this story pisses you off, I suggest you go over to Grandad’s, order a beer or five, and use your tipsy indignation to write your state rep. If this bar owner can stand up against hate and ignorance, why can’t our elected officials?

2 comments to “Oklahoma Behind the Curve on Gay Rights”