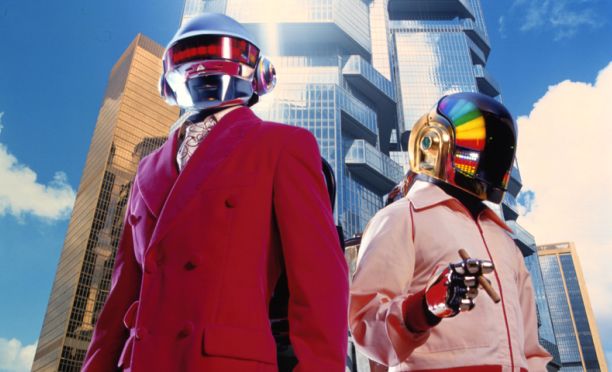 Helmeted french electronic pop-bots Daft Punk are releasing a new album. Excited yet? Well maybe I can give you a brief history on the band and privileged news about the new album to get the juices flowing. Not to be a Wikipedia article, but Daft Punk are known as the largest electronic band in the world. They have blazed a trail through the scene for the past twenty years, and have more imitators than any other in the genre. Daft Punk are not only musicians, but they have made various films as well. Most famous of these is Interstalla 5555, which is an anime story that tracks through their entire album Discovery. Their other film endeavors include Electroma, and the score for Tron: Legacy. The former is interesting, because it is live-action movie of Daft Punk in their robot personas that features none of their music. Why? Why the hell not?

Daft Punk is releasing an album in the middle of May named Random Access Memories. A band known for moving electronic music forward over the past 20 years has chosen to do something brave: record the entire album on analog equipment and with real instruments. What advantages does tracking analog have over digital you may ask? Analog has higher quality than digital by having a lot more bits in it. That is why vinyl records have a much warmer tone when you listen to them than tracks off you iPod. They have chosen to make an album that hearkens back to the heyday of disco. To aide in this process, they brought on studio hitmaker Niles Rogers. â€œWell big deal, who is that guy?â€ Niles Rogers is the man who produced and played guitar on such songs as, Chicâ€™s â€œFreak Outâ€, â€œGood Timesâ€, David Bowieâ€™s â€œLetâ€™s Dance,â€ and many more. If you want to make a disco album, he is the man to call. Period. Pharrell has also jumped on board, and is featured on the albumâ€™s first track â€œGet Lucky.â€ The singer has expressed how this music is not like most other electronic music, where you need MDMA (ecstasy) to dance to it. One feels compelled by the groove, so the body and mind reach euphoria on their own.

If you have noticed in the last month or so on SNL, Daft Punk has had teaser advertisements for the upcoming album. This has been done to reach the audience who is going to buy the album, the younger generation. It would not be surprising if â€œGet Luckyâ€ is the track of the summer. It’s already most-streamed new single in Spotify history It is catchy, upbeat, and danceable. Perhaps the most important ingredient is that itâ€™s fantastic. This track manages to fuse everything that is great about Daft Punk with everything that was great aboutÂ  disco, a genre too often maligned for being simplistic or repetitive. What the best disco music did was create futuristic, funky dance music.Â  If you havenâ€™t seen the preview clip of the music video, you really should spend a minute doing so. The sound of the song is one that should be friendly to most ears. As a 26 year old, sometimes I feel like an old curmudgeon by disliking most new music. It is largely canned, stale, and expressionless. The irony is that two musicians that have personas of robots are bringing soul back into music.

Daft Punk – Random Access Memories will be released May 21st