I’m not a fan of the ever-expanding supernatural horror that is vogue in popular culture, but my friends feel I need to branch out and watch movies outside of my comfort zone. However, my resistance intensifies when I see that “The Walking Dead” has eclipsed “Mad Men” in ratings, or when I noticed that SethÂ Grahame-Smith’s “Pride and Prejudice and Zombies” or “Abraham Lincoln Vampire Hunter” is featured at Borders (RIP).

Evil Dead arrives in theaters missing a lot of the humor Sam Raimi’s originals had (I’m told). It is directed by a no doubt reverential foreigner, Fede Alvarez. They’ve thrown in a capable Kristen Stewart imposter to ramp up the serious. This is a skillful film. Often the lighting and compositions inspire admiration. But, really, what is the point? By trying to strip away the camp from an inherently campy premise, Alvarez and Raimi have produced blood and gore signifying nothing.

“Evil Dead” opens its bloody, bloody tale with a sympathetic and creative twist on the boilerplate “cabin in the woods” premise. A group of aging 20-somethings, friends since high school, retreat to a gnarly cabin in the woods to help their friend Mia (Jane Levy), a former drug addict in danger of relapsing. Out there in the dwindling suburbs of Flint, Michigan she has had trouble staying dry. This hints at some welcome allegorical intention, but this is a hard film to keep focused.

The plot will be familiar to fans of the original. Our heroes are archetypes: one of the unlucky crew is a nurse, another the brother who has left the family business and another a high school teacher, Eric (Lou Taylor Pucci). Since he is the brains of the crew, and we know from horror movies that too much book learnin’ will kill you, he will be the one to unleash demons by opening up the “Book of the Dead.”

Mia, the woman of experience, is the first to see the rickety spirits and makes a dash for the woods. But the woods are malevolent too. She is caught by the tree limbs and suspended as a vine snakes its way up the recovery patient’s dress. If “Evil Dead” can be construed as an extravagant metaphor for the hell an addict goes through and puts others through as well, then the gesture is not unmoving. However, I think this may be reading too much noble intention into a tree rape scene. I’m sure the intent of Raimi and now Fede Alvarez is simply to shock.

A ravenous spirit possesses Mia and eventually makes its way to the rest. To deal with it they have to slice their own faces, beat each other with toilet pots and lock each other in the basement, or such is the case with Mia, who has profane shades of Regan from “The Exorcist.” “Evil Dead’s” contribution is in the spew. Instead of throwing up green bile, the possessed here throws up a healthy stream of black blood. In one scene Alvarez seems to put Mia in the corner all alone, staring at everybody, staring at the audience, throwing up that blood to no end. At such moments it’s clear the filmmakers are having a good time.
As much as the horror naysayer may find silly or gross about the content it can be said “Evil Dead” affords the sensation of being alive, with suspense scenes that are finely constructed. My friends and I winced when a knee was cut into with a rusty blade (“Oh,” I thought to myself, “they haven’t used a rusty blade yet, have they!?”). But we were also relieved by the humor that creeps in when the gusher of blood just doesn’t end. The scene where Mia is making her final escape succeeds in tacking on more of a chase-scene rush than you thought the movie had in it. For fans of the thrill, I imagine this has it all. 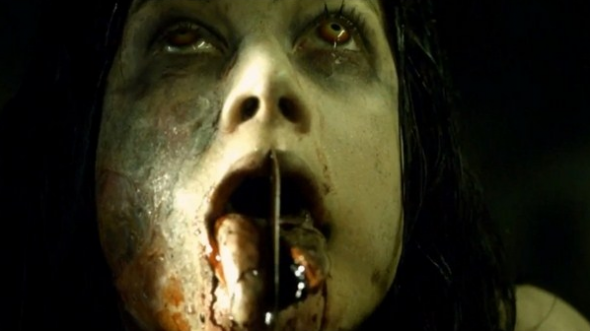 Fact: the tasty of rusty blades with make you sigh with near orgasmic delight. Why? Endorphin release, baby!

On the whole, going to see “Evil Dead” made for a good Friday night. I would recommend it for aficionados of this sort of thing. I would discourage the faint of heart and literary critics from seeing it. You already know if you love this stuff. The movie did what it was supposed to do, and that’s really all we can ask of it.

As people continually remind me, the nature of the movies is escape. But, as we consciously or unconsciously pattern our lives after the narratives around us, which is more real, life or the movies? Movies are a part of the country’s dream life. Like Freudian analysis, they tap into the Id to present unusual juxtapositions of images that somehow mean something concrete inside of us. What we can’t make possible with our hands and under our own circumstances we can dream or write on paper. The best art film directors do this by taking dream logic seriously, they leap narrative logic in order to relay a dream that transmits an emotional truth. Some off the top of my head: Terrence Malick, PT Anderson, David Lynch, and Harmony Korine. Certain horror fans might add Rob Zombie to this list.

“Evil Dead” is not this kind of movie, it is faithful to a more entrenched genre, and its audience comes expecting certain things (every form of torture imaginable and lots of suspense). Yet it still can be counted a part of this dream life of a country, and must be decoded to be understood. This is not about the intention of the filmmaker; that seems self evident enough.

There is a certain kind of glory in seeking to make the bloodiest, most cringe inducing horror movie ever. There is a scene in “Evil Dead,” foretold in the “Book of the Dead,” that is canopied by a rain of blood, centered by a house on fire, and further seasoned by what the chainsaw is doing. This moment of spewey red majesty probably felt to Alvarez what “Tree of Life’s” creation of Earth moments felt like to Terrence Malick. And indeed, our former drug addict escapes this evil apocalypse to walk into some new life, while somehow leaving the door open to a sequel. What concerns me here is the deeper cultural significance.

Why do zombies, mass murder, heists and the like appear so often in our dream life (the movies)? The obvious answer is that they are exciting. I think something else is going on, however. Zombies are a widespread fantasy because they are so flagrantly not alive. As we know, being alive sucks a lot of the time. Some of us exert great effort to escape reality, and others are pathologically pulled toward it. Both camps, hopefully, are doing the best they can with what they have. Whatever burden someone takes from the world before going to a theater they have gotten it from being alive. Our options for relief are few. The Zombie Apocalypse figures somehow into this perhaps in the way the Deus Ex Machina does in the the theater world, where an unseen hand swoops in to settle a problematic plot. Modernity has become too much to tolerate, so maybe in our dream life the Zombie Apocalypse clears all the trash away (As Deniro’s Travis Bickle wishes in “Taxi Driver”). In the dark of the theater, demons can be defeated and all you need to survive the collapse of civilization is a gun and some boyscout know-how.

If there is a dream logic to the current culture of supernatural fiction, might we start to wonder if some viewers fantasize becoming members of the walking dead, or vampires, or to survive a battle of wits with demons? Or do we just want a good 14 hours of sleep? The primal struggles of these characters are less ambiguous than impassioned and murky life. Like any escape, movies are fleeting. Whatever we left in the parking lot is still there waiting for us when we get out, and there is sure to be more trouble around the corner. So with that in mind, what good would a franchise be without a sequel?