Mason Weaver thrust the first Moon Mission Death Squad album, Ex Nihilo Nihil, into my hand one day after school in the suburb of San Antonio where we both lived. â€œListen to our album!â€ It was a 2x burnt CD-R in a jewel case with an ink-jet printed cover and disc art. I was shocked: â€œyou can make your own CD?â€ He was in college and I was an eight-grader on the eve of a new millennium. I was intimidated and intrigued but Mason, in his characteristic obsessive and manic enthusiasm, explained their process with a tour of their recording studio crammed inside his bedroom. With early digital recording gear and his sideman and brother Daniel, the two produced a new-wave, synthesizer driven power-pop record. I thought it was both insane and brilliant.

At that time, I knew the Weaver brothers only briefly. They lived down the street from me. Eventually they became a fixture of my adolescent rebellion. Originally from Oklahoma City, the Weavers returned to their home state within a few years. I followed their output and antics via the Internet, befriended Daniel and stayed in touch as they went on to produce five more full length albums. Dedicated to the D.I.Y. indie-rock aesthetic of the late 1980s and early 1990s, MMDS produced, mixed, mastered and released everything by themselves. They never toured. They never went into a studio. They never attempted to get signed or â€˜make itâ€™ as young bands so often dream. It was just what they did every few years. It was their lives as chronicled on Zip discs and hard drives. 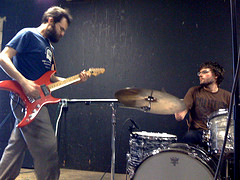 MMDS was ultimately the musical record of the Weaver brothersâ€™ cultural obsessions. Mason and Danielâ€™s media diet was (and is) extreme: encyclopedic knowledge of television, movies, Sci-Fi novels, and of course popular music. And all of it is fodder for their musical impulses. Their father, Timothy, is a musical instrument sales rep who supplied his sons with all kinds of gear. The lyrical content was an indivisible stew of futurism, dystopian scenarios, and heartfelt, middle-of-America pleas to be heard in a sterile consumption-obsessed society that excluded them. The Weavers didnâ€™t want revolution, just a modest musical niche to call their own.

In “Tomorrow Today,” the opening track to their first album, Mason and Daniel double-down on their technological stance: â€œYou say progress is your enemy / but Iâ€™ll shake hands with technology / Iâ€™ll take a number instead of a name / and Iâ€™ll trade my soul for a chip in my brain / and Iâ€™ll give up my freedom of thought / to the Jesus Christ with a Macintosh.â€ Flaky narration, 1980s pop melody and layers of synth drape the real perils of navigating the â€˜techno-futureâ€™ while offering the listener a wager: a new 21st century naivetÃ© (â€œwill I be a human slave to all the cyborg men / too far removed from what I was to overpower them?â€) or acceptance of the horrifying pop-culture informed consequences?

The remainder of the first album isn’t as strong, but has a few worthwhile tracks. “Modern Age” practically demands the listener throw-up their hands and give-up the ghost of an honest, “better” modern society. “Julie Newmar,” a confessional to TVâ€™s Catwoman, and “Macyâ€™s Day Parade,” a They Might Be Giants like self-deprecating illustration of a sour relationship thatâ€™s â€œspreading me thinner than an anorexic model,â€ are also strong enough to stand on their own. This first album was concept, a pastiche of song forms leading Mason to conclude that â€œthe 1980s are the 1950s.â€

Over time, the bandâ€™s sound and concept morphed from ironically tuneful to cerebral and brash while remaining dense and literate. In the first follow up album, “The Fake Pope” (2001), the pace of the record slowed with sparse tracks of acoustic guitar and Masonâ€™s tenor voice like on “The Ghost of Jim Morrison” or the fuller and just as eerie “Trenton.” There were still noisy rock tracks like “Andrea Elson” and “Rock and Roll Machine,” but it was clear that the band had no intention of nesting in any particular genre. Yet as the titles and words suggest, MMDS was always meant to be taken literally.

“Ignore Your Problems And Theyâ€™ll Go Away” (2003) was a huge step in the direction of straightforward rock, with greater lyrical tension reflecting Mason and Danielâ€™s historically fraught recording sessions. The paranoid fables of “Indiana” and “Catarophist” are unlike the previous albums that relied on whimsy and pop culture. Still, “Eleanor Roosevelt” contains all the songwriting tropes of MMDS in full force and is one of their best. “Videophone” and “Loneliness Police” also signaled a departure from the goofy songs of the past and replaced the old sentiment with a new found seriousness, even as they cited pop culture like “Indiana Jones and The Temple of Doom.” Danielâ€™s songwriting and singing is featured in the devastating “The Politics of Dancing, Pt. 2.,” his only MMDS solo effort (a fraction of material from his solo output as Statistical Analysis). The bedroom studio is a constant presence on the record in the form of birds, roofing repairs and other uncontrolled ambient noise that again testify to the bandâ€™s insistence on doing everything themselves.

The remainder of the MMDS cannon is more straight-ahead, tighter and lyrically cocky. Case in point is the title of “Fuck What You Heard” (2005) and its stand-out track “America”: both an indictment of liberal apathy within the second George W. Bush administration and a love letter to the eponymous 1970s folk/rock act. â€œI hate my country but I love your band.â€ Not simply rocking for fun, they found something to say between the ever present pop-culture references. As with “True Story,” and “Mike and Ambor,” Masonâ€™s lyrics show signs of cracking out of his internal fantasy world into one inhabited with others who are neither Muppets nor celebrities. Though the straight-up cultural odes like “Neil Diamond” remain, they are in greater moderation: the albumâ€™s longest track is just over three minutes.

Ever the low-fi fanatics, the follow-up “4tracker/Attacker” (2007) was actually a Mason solo album. With just a drum machine and various guitar overdubs, itâ€™s a stripped-down showcase of Masonâ€™s lyrics and guitar attack. As far as I remember, the album was a completely analog affair from recording to mastering. “Distant Desert War” uses “Dune” as a lyrical vehicle to allude to a bullshit Iraqi occupation while “Time as a Construct” attempts to muse on relativity while not sounding too profound. If there is an M. Weaver writing style, it is this ironic distance typical of postmodernism.

“My Joke Is Ruining Your Joke” (2009) is their last and definitive album, the key to what MMDS is all about. Gone are the high concepts, abandoned are the kitschy synth lines. It is rock and roll – hard and dissonant – with the return of the original line-up with Daniel on drums and Mason on guitar, bass and vocals. Thereâ€™s a greater immediacy here, like an attempt to stay afloat amidst personal turmoil. And there is a marked social nihilism of the kind they only joked about in their early work. “Excesses of Waste” is a rebuke of contemporary consumerism; “Analog Basis” is another love letter to drum machines and admission that Mason had been â€œfaceless for too longâ€ for the â€œeconomies of song;â€ life in the “Shallow Grave” of â€œthe peopleâ€™s willâ€ abused by (some) power while we commiserate through fucked up “Yerba Mate” caffeine experiences. The haunting “Password,” that begs a wayward friend to â€œlive together in the world we createâ€ is a glimmer of honest concern for human relationships – and is Masonâ€™s best song.

Besides the odd live show, at the Medicine Hall in Norman or any of the various incarnations of The Conservatory in OKC, MMDS were never on anyoneâ€™s radar. They were never on a label and never cared to be. However, to friends in Oklahoma’s music scene and long-distance fans, Mason and Daniel provided a musical sing-a-long to the post-modern malaise our generation more or less has accepted: numb lives, repudiated and deconstructed politics, and a futurism without a future. MMDS can be heard as troubadours of early twenty-first century cultural capitalism for the quarter-life crisis crowd.

If there is a constant theme in The Moon Mission Death Squad, it is the Weaversâ€™ ever present feeling of alienation – from work, life, even the culture and ephemera they breathe like air, even as they are musically taking the piss out of it as best they can. Indeed, sadism and masochism are lyrical themes in their work that justify the real pains and pleasures inflicted on themselves and others. The listener is left not knowing who these guys are, but gets the sense that they are both too smart and frustrated by it all to let anyone get too close anyway. In their decade of making music, you can tell theyâ€™ve grown up, just a little, but retain the slacker ethos so critical to their creative process that you wonder at the wealth of talent they might be repressing.

This collection is only meant to serve as an introduction to the bandâ€™s corpus: hand-picked, indicative songs I enjoy and recommend to you. However, everything is available online through http://moonmissiondeathsquad.blogspot.com/ (complete with album art and high-quality FLAC files for fellow music nerds). According to their blog, Mason plans a new album for 2013 and remastered versions of their previous work:

â€œHey scumbags. After a couple of years off Daniel and I have a concrete schedule for our 2013 album, tentatively titled “If Everything is Meaningful, Nothing is Important” or “Everything’s Important; Nothing Matters.”.

It’s 13 new lo-fi indie rock home recorded songs about (what else) how we’re all doomed.â€

How could we expect anything less?