Oklahoma City may see massive job losses and furloughs in the next month. The package of automatic federal spending cuts known as sequestration will go into effect March 1st unless a compromise is reached in Washington.

â€œI havenâ€™t done the head count, but I can tell you a large part is committed to saying we have to reduce spending. Weâ€™d rather do it another way. But if the only way it can be done is sequestration, then it has to be done,â€ said Rep. James Lankford (R-Edmond) In 2012 The Budget Control Act created a committee to find at leastÂ $1.2 trillion in deficit reduction. When that group failed to reach an agreement, an automatic budget cutting process called sequestration was agreed upon. Should sequestration go into effect, there will be $1.2 trillion in cuts over the next decade, divided evenly between domestic and defense spending. Employees at Tinker Air Force Base, the largest employer in the Oklahoma City area are bracing for painful cutbacks. 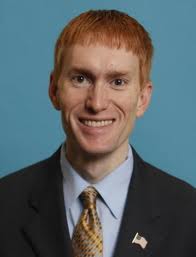 â€œSequestration will be devastating for Tinker workers. A good example would be our painters. 22 furlough days for the average painter at Tinker means that the worker would lose about $670 per month. Congress has frozen our pay for the past 3 years while our cost of living has sky rocketed.â€ said Bryan Jackson, Legislative and Political Director of American Federation of Government Employees Local 916, which represents 10,000 civilian employees at the base. â€œWe are middle class workers who have done nothing to get our country into this mess, yet we are the only group that has had to make sacrifices to deal with it. We arenâ€™t the Washington bureaucrats that some have made us out to be. 86% of this countryâ€™s federal employees work outside of D.C. and 44% of federal employees are veterans.â€

In the state of Oklahoma there are 96,153 federal employees and retirees according to the Bureau of Labor Statistics Quarterly Census of Employment, not including active duty military personnel. Between cuts to education, the military, and other programs, Oklahoma stands to potentially lose more than $250 million and thousands of jobs. The cuts would also effect state programs that rely on federal funding. â€œThe most troubling impact of sequestration is that it would cut another $50 million from Oklahoma schools, at a time when they’re already being hit from all sides. The cuts would come on top of a big drop in state funds for education in recent years because of the recession, income tax cuts, and new property tax caps.â€ said Gene Perry of the left-leaning Oklahoma Policy Institute. â€œIf Oklahoma’s elected leaders in Congress want to step up and do their jobs, they should stop talking about who’s to blame and say how they would compromise to fix it.â€ Of the $7.43 billion in federal grants received by Oklahoma in Fiscal Year 2011, $6.25 billion would be exempted from cuts. Exempted programs include Social Security, Medicaid, the Childrenâ€™s Health Insurance Program (CHIP), Temporary Assistance for Needy Families (TANF), and SNAP food stamp benefits.Â Medicare, community health centers, and Indian health services are not exempt, but cuts to these programs would be limited to 2 percent. 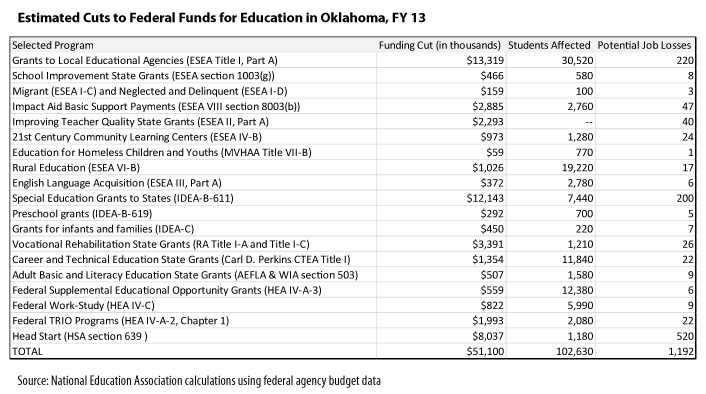 Lankford notes that the Republican led house has already passed three measures intended to prevent sequestration, but none of them are likely to be taken up by the Democrat led Senate. Defense hawks in the house and senate also are determined to prevent sequestration due to the massive cuts in defense spending included in the package. â€œSequestration will have real and dangerous consequences for our nationâ€™s security. Delaying the deployment of the Truman Carrier Strike Group is just the tip of the iceberg. And donâ€™t think that adversaries in the region like Iran, or North Korea who just this morning conducted a nuclear test, are not emboldened by these decisions,â€ Said Senator Jim Inhofe (R-Oklahoma.)

In recent days the hopes for a compromise have been raised. Politico reported that there are talks between the House and the White House that may result in a compromise. There are five days remaining before the cuts go into effect.