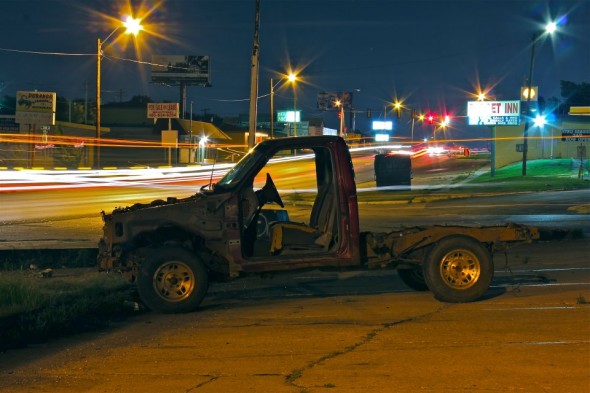 Anthony Hartfield Jr. was shot and killed about 3:20 a.m. Monday January 14th at 1215 NE 46. Someone kicked in his door, shot him, and ran away. He had no criminal record and was studying to be a nurse. He was 20-years-old.

Darryl Davis Jr. was shot to death a year ago in a dispute over a $250 loan. His girlfriend was two months pregnant when he died.

President Obama outlined his policy proposal for gun control this past Wednesday, which included a sweeping set of proposals and executive actions. They seem sensible and sane to me, but I doubt they will significantly decrease the number of gun deaths. They may make the deadliest weapons harder to get, they may decrease the firepower that makes its way into our neighborhoods, but if we want to really address gun deaths in a serious way we need to look at the social causes of violence. The horror in Newtown last month brought new attention to the issue of gun deaths, but it’s an outlier. Most people who are shot in the US are more like Davis and Hartfield than the victims in Newtown. What is needed is a comprehensive effort, starting at the neighborhood level, to change the conditions that encourage and facilitate violence.

Here are ten things we – private citizens, state and local government, community organizations, corporate citizens – can do right now, for little cost, to decrease the carnage in our city and make our homes and streets safer for all OKCitians. This isn’t going to be a cheap endeavor, but compared with the cost of prisons and the human cost in lives, potential, and the fallout of broken families, it seems like the more ethical bargain.

1. Crime Prevention Through Environmental Design (CPTED)- reclaim neglected public spaces such as parks and playgrounds to make them more useful to the community and less attractive to criminals. Typical CPTED activities include the establishment of community gardens on vacant lots, improved maintenance of parks, community programs that make use of public space, and such physical improvements as adding stop signs and public lighting, improving sidewalks and streetscaping. There seems to be plenty of money available for streetscaping and improvements Downtown, more of that money needs to make it into the neighborhoods where it could do the most good. This probably sounds like silly playing around the margins; why spend money on parks instead of essential services? We have to spend money on both. Our physical surroundings effect us more than we’d like to admit. The “amenities” enjoyed by the wealthy send a message about how the world sees them and how they should see themselves. The same goes for poor communities. The spaces we live in matter.

2. Increased recovery and support services for addicts and a more sensible drug policy. Addiction drives the drug trade, and the drug trade drives the violence. The “War on Drugs” is the main cause and perpetrator of gun violence in the US. Treating addicts as criminals and putting them into the prison system does nothing to solve the problems we face. Sentencing addicts to treatment instead of prison and issuing citations for possession instead of arrest would do much to both prevent recidivism and unburden our criminal justice system.

3. Community policing. Find full-time community foot officers, good candidates include those members of the community who know the neighborhood and can work closely with residents to solve local problems and resolve conflicts. The answer to crime is not always more cops. Making the policing force part of the fabric of the neighborhood rather than an imposing outside force that sweeps in, arrests people and sweeps back out would go a long way towards helping to prevent and solve crimes.

4. Legal assistance. Help neighborhoods to enforce laws regarding drug nuisances, vacant properties, and housing and building code violations. Help residents pursue civil remedies against slumlords and others who exploit the community. Again the spaces we live in matter.

5. Improved Public Transit. Oklahoma City is built for automobiles. That’s fine if you own one, but if you don’t, it’s a burden. We need to expand bus service across the board, improve night and weekend service, and provide better and more frequent commuter service within the metro area. The commuter rail and streetcar systems currently being planned will also be an important step towards making travel within the city easier for people without access to cars.

6. Be vigilant in dealing with Domestic Abuse. Oklahoma City saw a spike in domestic homicides last year; education and community support for victims of domestic abuse are essential, as are adequately staffed shelters and vigorous enforcement of VPOs and restraining orders.

7. Engage nonviolent ex-offenders in community revitalization projects as alternatives to incarceration. Prison is very good at taking small time, non violent offenders and turning them into hardened convicts. Giving people a chance to make it up to the community and help improve life for their neighbors and family is a far better option.

8. Give funding and support for community led and generated projects rather than try to micromanage the outcome from outside. It can be hard for city planners and corporate donors to step aside and let the people who have the most at stake in a project have the most control over it, but it is absolutely essential that they do so. Community projects belong to the community and should reflect the ideas, aspirations, and talents of the people.

9. Get food on tables. Oklahoma has one of the highest rates of food insecurity in the country. A proactive approach needs to be taken to make sure that people are able to feed their families without feeling ashamed or being stigmatized. There’s no shame in hard times. Outreach and services should be located close to the neighborhoods where the need is greatest rather than centralized in offices around the Capitol where they are all but inaccessible to people without cars or who can’t spare bus fare.
This only scratches the surface of what is needed, but it could be a start. Until we prove that we are a city that treats people like human beings and ensures that all of our neighbors can live in peace and security, our civic “renaissance” will feel for some as though we are still living in the Middle Ages.

One comment to “9 Ways to Cut The Murder Rate”