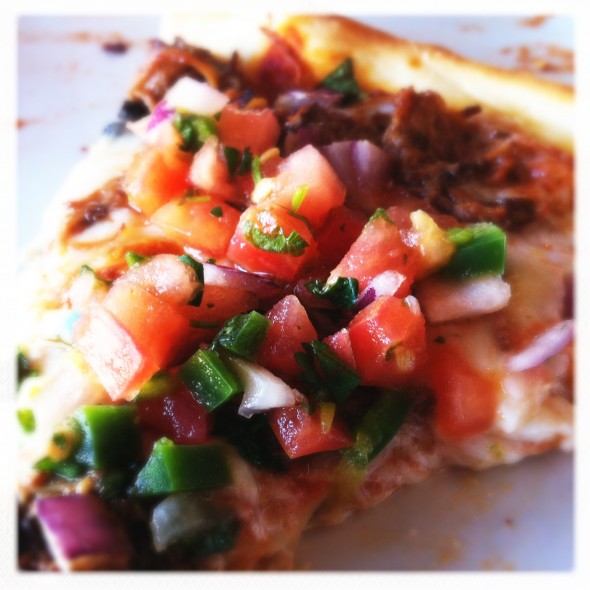 When OKC.NET moved into this office, it was a bank-owned converted warehouse with 2 non-profits in it and nothing else. The ambiance could be described as somewhere between methamphetamine den and post apocalyptic squatter camp. That is perhaps too harsh. It could easily have been a modern day squatters camp.

All of this has changed in the past year; we moved into a bigger office. We have watched as the empty space and surreal paintings of dogs as admirals were replaced by actual businesses, and, most recently, we’ve seen two actual eating establishments open – OrangeLeaf, one of those Yogurt by the Pound places, and Pizza23OKC. Or what we have been calling it this whole time: 23rd Street Pizza.

The location makes sense; we are, after all, across from what has now long been one of the most popular restaurants in the city, the ubiquitous Big Truck Tacos, and down the street from one of the other most popular restaurants in the city Tucker’s Onion Burgers. And we’re in a part of the city where the rent is still relatively cheap, which has made this strip of NW 23rd between the two domes, the gold one and the Capitol, an ideal spot for new businesses to set up shop.

As a result of all this new development, when walking into our building, one is now met with the smell of vanilla frozen yogurt or designer pizza, depending on what time of day it is. Since we are nothing if not lazy, and we need content for the time between now and our holiday hiatus, we trekked the entire 4 or so yards from our office, down the stairs, and into 23rd St. Pizza. 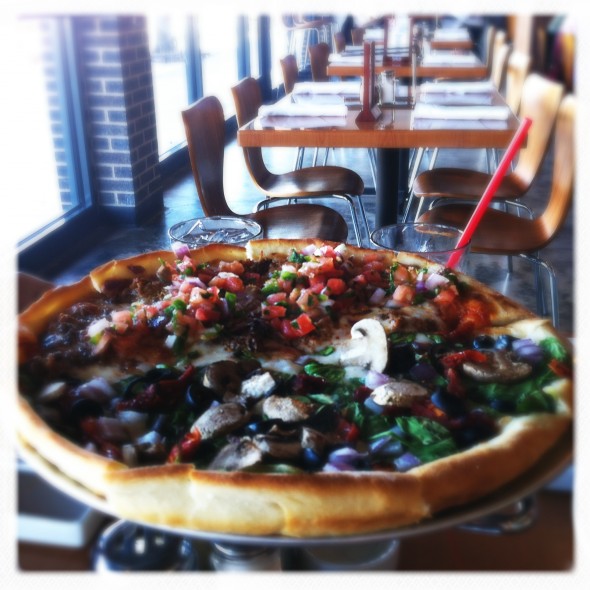 The ambiance is pleasantly open and modern, just the sort of fast casual Italian eatery envisioned by my ancestor Sergio Ikea at Ellis Island 100 years ago. (Note: None of this true.)

We weren’t there for the scenery, so we quickly turned to the menu. The meal that I anticipate getting when I eat there every day for the next 30 years is the $8 lunch special: a personal pizza with three toppings and a side salad that looked like it would constitute two entrees in most other Western nations. Former editor and current internet star Danny Marroquin (of Danny Marroquin Show fame) went with this option. Helen and I, however, split a medium pizza. Why? Deductible business expense, of course! 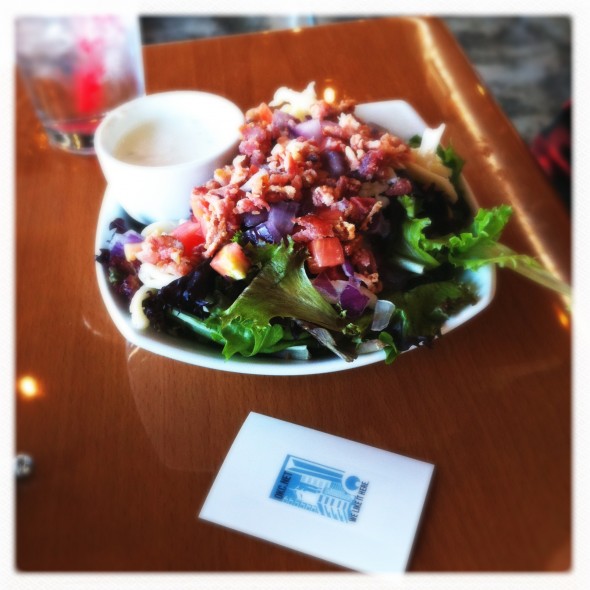 For my half, I chose the Carnitas Pizza, because it’s my policy when going to a pizza place to find the pizza that doesn’t exist anywhere else and order that. In this case, it paid off handsomely, with piles of delicious pulled pork and pico de gallo serving as a surprisingly apt accompaniment to the marinara and mozzarella base. 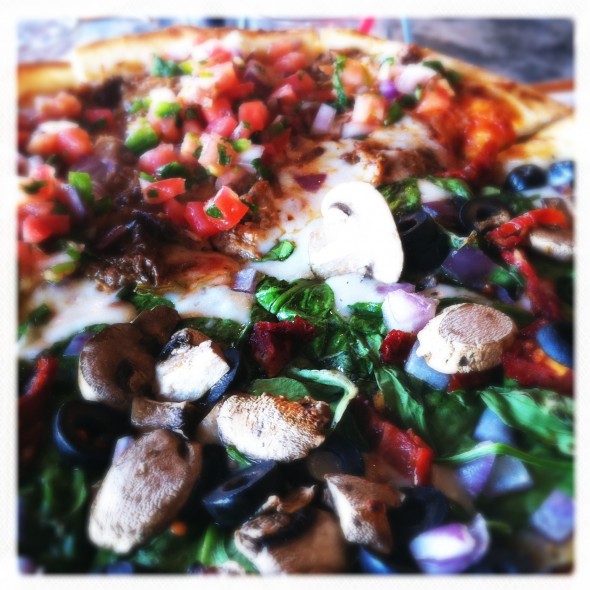 Helen chose the Vegetarian Pizza for her side, which was about what you would expect; mushrooms, spinach, sun-dried tomatoes, and onions. It was good, but nothing exceptional. It may just be because we paired it with the super bold, pico covered Carnitas pizza, but we both felt the veggie pizza was a little on the bland side. It could use some more zip. 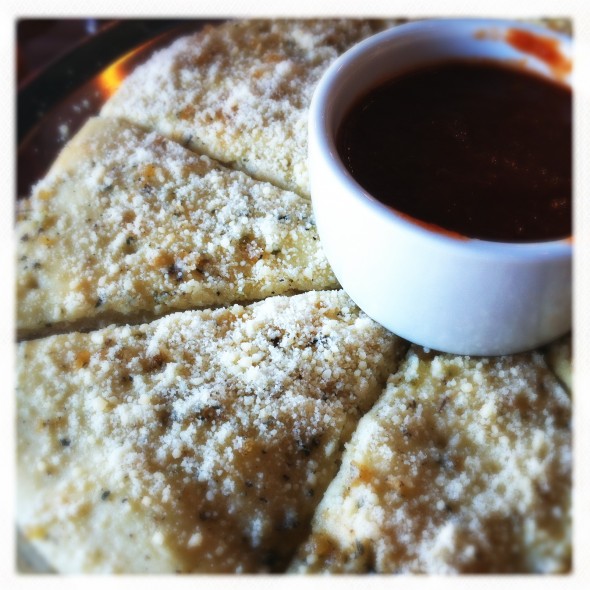 We also ordered some Rumble Bread, which is basically a circle of garlic and Parmesan covered pizza dough with marinara to dip it in. Also nothing too terribly original, but I can see mountains of it being served during Thunder games. Did I mention they have a bunch of TVs and a bar? They have a bunch of TVs. They also have a bar.

Will I be back? Yes. I work on top of it. Of course I’ll be back. Would I return even if that wasn’t true? Yep! It’s well worth a visit, even if you have to park to enjoy it. Just don’t park in the spot just west of the median by the tree. That’s my spot.

Want to browse their offerings? Check this link to read more about them and their menu. 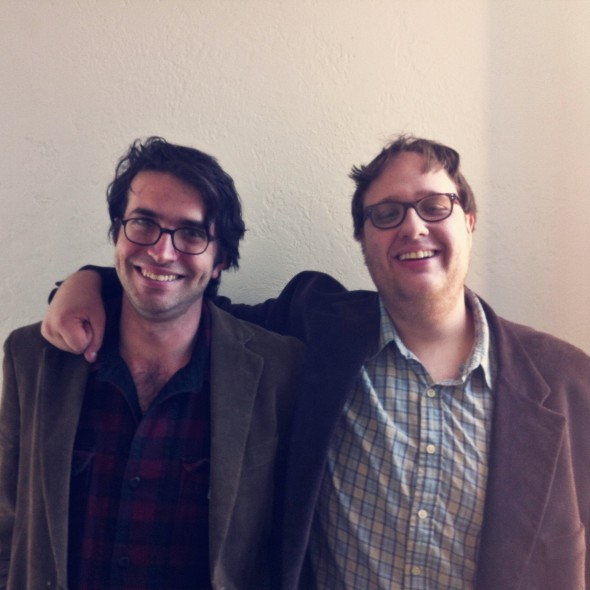 Helen could have waited another 10 seconds until my eyes were open to take this photo. Also, I apparently need to shave. Also, yes we were both wearing brown blazers. No we didn’t plan that.