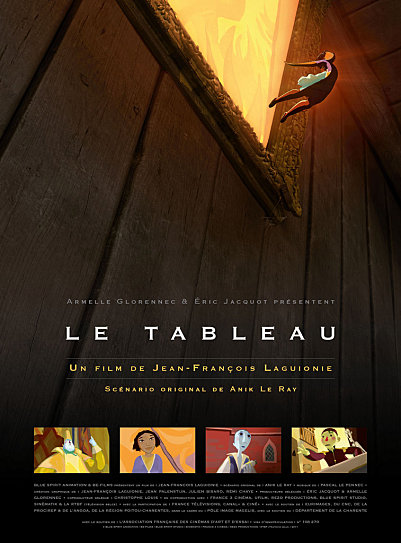 If you appreciate the animated works of Hayao Miyazaki, the visionary director of such works as “Spirited Away”, then you’ll likely enjoy Jean-FranÃ§ois Laguionie’s film “The Painting” (Le Tableau). It would appear the Oklahoma City Museum of Art had the rare opportunity to screen Laguinonie’s movie on Wednesday evening in their celebration of French Cinema Week, which is kindly brought to us by the Cultural Offices of the French Embassy, The Consulate General of France in Houston, Texas, and L’Alliance FranÃ§aise dâ€™OKC. As you can see, there is a hierarchy at work. Even so, I appreciate their efforts as “The Painting” was a good film to have shared with my oldest daughter. And as the speaker who introduced the movie said last night, it’s not like our government was allotting any money to the museum to bring in foreign films.

It seems like foreign animation doesn’t make it to wide release in theaters often. And when it does, it doesn’t appear to be offered for very long. I was a little sad to discover even Miyazaki’s “Ponyo” screened for only a couple weeks at the Warren Theater in Moore. I learned this as I’d been planning a movie birthday party for my youngest daughter. Since the list of other movies available around the time of her birthday seemed dismal in terms of narrative and animation, we ended up doing something else.

Why does this even matter? Because good animation that isn’t solely based on selling merchandise and theater seats is rare. Not that Pixar and a few other American-based animation studios don’t make good movies, but they’re just not the same kinds of narratives as one gets out of Japan, France, or from anywhere else outside the United States. Even Pixar’s universally acclaimed “Up” caught flack from Disney early on for not having enough merchandising opportunities built into the storyline. While movies such as “Happy Feet,” “Monsters, Inc.,” or “Bee Movie” (to name a few ecologically minded stories), are light enough to be enjoyed by a wide variety of audiences, they don’t have quite the same visceral impact as one of Miyazaki’s films like “NausicaÃ¤ of the Valley of the Wind” or “Princess Mononoke.”

The wildly imaginative and vivid animation, involved plot lines, and treatment of themes in these styles of film don’t exactly lend themselves to being easily viewed by a large American audience either. But if you want your children to grow up with an appreciation for diverse styles in narrative and animation, taking them to see a one or more movies like these will do wonders for their world view. Really the exotic beauty of foreign film is in the varieties of artistic expression depicted. The plots do not adhere strictly to the monied formula of putting people into theater seats. Rather, they breathe and allow themselves to explore complex subjects and themes.Â  Which is where animators like Miyazaki and Languionie excel.

But to the point: “The Painting” is not an ecological awareness film in the slightest. It’s an existential one. It delves into the existence of a single work of art, and from there explores the other worlds that surround it. Its characters question the intention of their creator, The Painter, who seems to have abandoned them. In his absence a hierarchy based on superiority evolves; the vibrant Allduns are completed figures that live within the beautiful castle, while everyone else is forced to live well outside the castle’s borders. The Halfies are figures who are nearly complete save for a few small details. Then there are the Sketches. These poor wretches are abused by the Allduns because they are the comprised of only the most primitive shapes and are drab in color. “The Painting” is primarily narrated from the view point of Lola, a Halfie girl. She aids a pair of star-crossed lovers, an Alldun named Ramo and her Halfie-friend Claire, while on a mutual quest to find The Painter. They are accompanied by a Sketch who is on a mission of his own too.

One of my favorite sequences from “The Painting” is the scene where Lola crosses the threshold from her world into the one beyond it. There’s a lovely sense that she is on a flight of fancy as she soars with the wind until she sails right out of the canvas and arches into a graceful dive for an ecstatic period of time before her dress is caught on another painting’s hook, which of course jerks her (and the viewer) back to into a new reality. Once all the characters are assembled in the Painter’s studio, the search really beings. From there the plot is not unlike the one from Wizard of Oz. The characters discover much about their creator, but in turn learn to do something for themselves and eventually evolve into a new kind of creation by the end of the film. And I think the pay off at the end of this movie was much more satisfying than Dorothy waking up from a dream, as I’m ruining nothing by stating that Lola’s character’s is a natural born wanderer. That the character never loses her sense of inquisitiveness is a wonderful ending for this existential story of discovery, self-awareness, transformation, and acceptance. That said, as an adult I got a lot out of the narrative, but my oldest daughter did too. It bears mentioning that unlike her mother, she has never taken a film studies class. What she does have working for her is that she is 10 and has the reading ability to stay on top of the dialog.

That’s probably another reason this film didn’t have a wide release. It’s subtitled. Sad fact: I’ve discovered the number of adults willing to read subtitles seems pretty low. They’ll do it only if forced to, like the movie will never be dubbed in English, or they won’t do it all. This isn’t to say all adults are like this, but I’ve met enough people who won’t watch subtitles to really wonder how they got to be like this. I don’t think it’s a complicated task, but I do realize younger viewers may struggle because the words can move quickly. That said, there were a variety of ages at OKCMOA Wednesday night. Easily the adults in the audience out-numbered the children. Who knows, maybe their parents used to take them to see these kinds of films as a kid too. But when we were leaving the theater, I asked my daughter how she liked it. She informed me that she wasn’t thrilled with the fast pace of the dialog, and by extension subtitles, but she understood the majority of the film and that she liked the story and it’s message.

Also, in watching “The Painting” with your kid, you might find yourself discussing different caste systems and how every culture seems to have one. We talked about a number of real life examples from the rich, the middle class, and the poor to origin-based caste systems found in colonial Mexico with the Peninsulars (pure Spanish blood), Mestizos (mixed Spanish and Native), and Indios (Native peoples). We even drew comparisons between other works of fiction, for instance: Purebloods, Half-bloods, and Muggles. It’s a theme that’s often repeated. She told me she’d watch it again, and I sincerely hope we do get the chance. I’d like to hear her take on the existential themes regarding the creation of art in relation to its creator. I think she might have missed that given all the other subtext floating about the film.

If you missed the opportunity to view French animation with “The Painting,” worry not. On Saturday July 14th “Tales of the Night” (Les Contes De La Nuit) by Michel Ocelot screens at 2:00 p.m. at OKCMOA. The description is as follows:

“Renowned animation auteur Michel Ocelot extends his signature shadow puppet style in Tales of the Night, with black silhouetted characters set off against exquisitely detailed backgrounds bursting with color and kaleidoscopic patterns.Â  The film weaves together six exotic fables each unfolding in a unique locale, from Tibet, to medieval Europe, an Aztec kingdom, the African plains, and even the Land of the Dead. In Ocelotâ€™s storytelling, history blends with fairytale as viewers are whisked off to enchanted lands full of dragons, werewolves, captive princesses, sorcerers, and enormous talking bees â€“ and each fable ends with its own ironic twist. In French with English subtitles.”