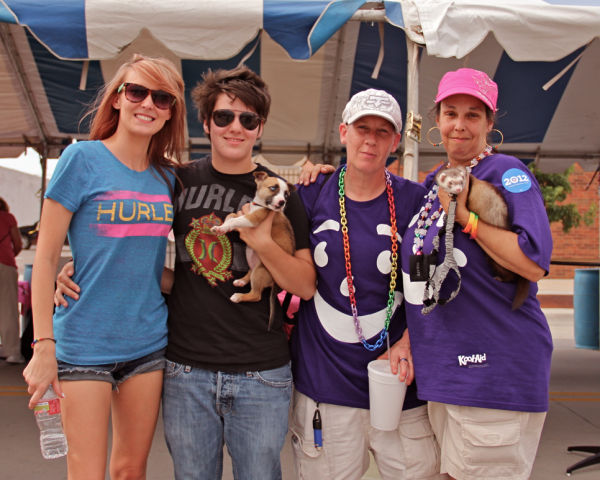 Makes my heart beam with some genuine OKC Pride to see these lovely ladies representing on Saturday afternoon. Photo by Helen Grant.

Oklahoma is not the best place to be queer. We canâ€™t get married or even domestic-partnered. We canâ€™t co-adopt children. Even our own congressman, Rep. James Lankford thinks that we should be fired from our jobs just for being gay because obviously we chose to be this way, so weâ€™re asking for it.

Still, being a lesbian is pretty awesome. (I assume the same can be said of being a gay man, though I have no first-hand experience.) There are even a few perks that make it worthwhile to be a lesbian in Oklahoma. Sure, Iâ€™d rather be able to file joint taxes, but we have to take what we can get. Even without many basic rights that straight people enjoy, being a lesbian is pretty great. I predict that once DOMA gets struck down, all the straights will be jealous. Donâ€™t believe me? Perhaps the list below will change your mind.

Oklahoma City has a surprisingly kick-ass Pride Weekend. Since Pride Weekend is the only time itâ€™s truly safe to be â€œhere and queerâ€ and â€œout and proudâ€, the OKC queers do it up right. Iâ€™m always surprised and heartened by the number of people who attend the festival and the parade â€“ both LGBT folks and allies. I once attended a Pride celebration in Northampton, Massachusetts â€“ a city with equal rights for gays and the highest per capita number of lesbians â€“ and it was the most boring Pride ever. The parade mainly consisted of women walking their dogs. In contrast, Oklahomaâ€™s parade has a delightfully edgy mix of bar floats, drag queens, church groups, leather fetish people and dykes on bikes. Keep up the good work, Oklahoma Pride!

Reasons it’s awesome to be a lesbian in OKC: you never have to argue about where to go when you go out because there are only two lesbian bars in the city. In the mood for a rowdy night? Pregame at Alibiâ€™s and then head to Partners. Interested in a more chill evening? Get a drink at the elderly/country-western side of Partners, and then head to Alibiâ€™s if things get too loud. Plus, once youâ€™ve been in a relationship for a while you stop going out anyway, so itâ€™s no longer an issue. I canâ€™t even tell you how much Iâ€™ve saved on bar tabs over the past few years! (Disclaimer: I live on the north side, and though Iâ€™ve heard that there are lesbian bars on the south side, Iâ€™ve never ventured out to find them. If anyone has some southside bar recommendations, leave them in the comments!)

Speaking of bars, you will never pay a $15 cover at a gay or lesbian bar, and the drinks are cheaper too. Even if the Bricktown clubs had a â€œlesbian nightâ€ I still wouldnâ€™t go because the gay clubs will always be a better deal.

Once you meet one lesbian, you meet ALL the lesbians. Since adversity breeds community, and Oklahoma has plenty of adversity, you just need to befriend one lesbian and she will introduce you to all the other lesbians that she knows. Soon, not only will you know a great deal of lesbians, but you will also know a great deal too much about the romantic lives of those lesbians.

Once you find a girlfriend, you double the size of your wardrobe. This is assuming that your girlfriend has decent taste, and that you are a similar size. Even if you arenâ€™t a similar size, you still may find your girlfriend stretching out your slippers, or wearing your favorite baggy sweatshirt, but it will probably be adorable. This rule also holds true for your music collections, as long as you donâ€™t already own all the same music; and your friend circle, assuming that you donâ€™t already have all the same friends.

A lesbian can safely ask her girlfriend if sheâ€™s having her period. Â As long as she does it as nicely as possible. Can a straight man ask his ladyfriend the same questions? NO! It will always sound condescending.

Speaking of periods, someone will always have a spare tampon/hair elastic/clean pair of underwear/chapstick/(insert personal item here).

You will always be able to find a friend who will take care of your dog while youâ€™re on vacation. Itâ€™s a stereotype, but generally, lesbians love their dogs. However, keep in mind that you will then be obliged to dog-sit your friendâ€™s house full of special needs Chihuahuas or keep her giant slobbery diabetic rescue dog when she goes out of town.

Last but not least in reasons being a lesbian rocks: both partners in the relationship are fully aware of the location of the clitoris.

3 comments to “Why Itâ€™s Awesome to Be a Lesbian, Even in Oklahoma”