Just an hour and a half southwest of Oklahoma City, lying in the shadow of the Wichita Mountains, is the unique town of Medicine Park. Â Known as “America’s Cobblestone Community”, this historic town was founded on July 4, 1908 by Senator Elmer Thomas as a resort for the rich, famous and infamous. Early regulars included future president Teddy Roosevelt and outlaws Bonnie and Clyde. 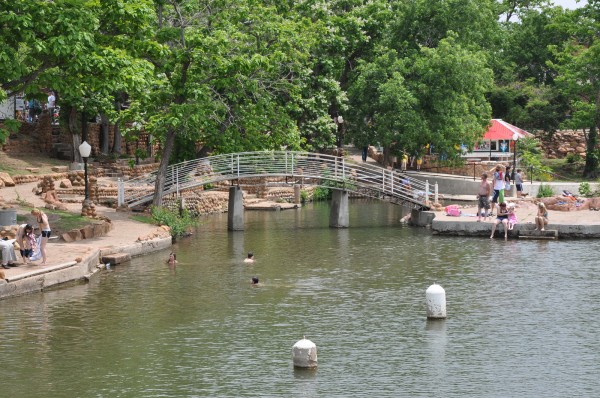 Despite living in Oklahoma for the majority of my life, I had never visited the south-west portion of the state. Â The farthest I had ever travelled down I-44 was to Chickasha to see the annual Christmas light display. Â No one I knew that had lived in the Lawton area ever had anything nice to say about the town, so there was little enticement for me to make the journey. Â However, as the self-proclaimed “Travel and Tourism” correspondent for OKC.NET, it was my duty visit the region when the idea of writing a piece on Medicine Park was suggested by my editors. Â So, in the name of journalism, I recruited my husband and two seven year old little girls (my baby sister and my niece) to join me in researching the area. Â After finding out that Medicine Park abuts the Wichita Mountain National Wildlife Refuge, I bribed the girls with promises to see wild buffalo during our trip to ensure theirÂ complacency. 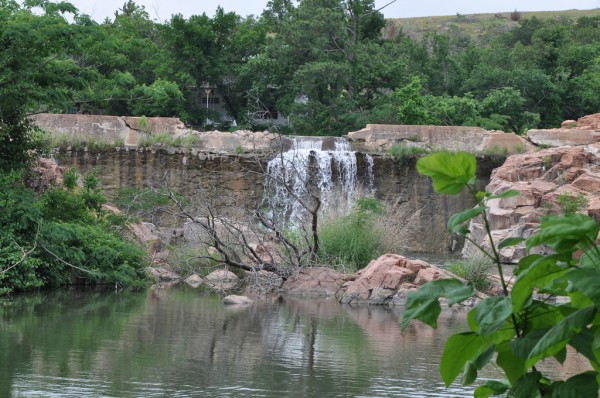 Once we arrived in the town, my husband and I were pleasantly surprised at the beauty of the region. Â The charming cobblestone clad cabins and shops lie on the banks of a creek and bathing pool that flows through the middle of the town. Â The girls were extremely excited to see the ducks and geese in the stream and were especially enthused when we happened upon a local snow cone and snack stand run by Santa Claus himself.Â  Santa even has his own mailbox where you can directly drop off letters containing your Christmas wish list. Â We were not previously aware that swimming was allowed, so the girls were a bit disappointed that we didn’t permit them to just jump in the water fully clothed after seeing other children and visitors partaking of the fun. Â We saw several people fishing for trout, and if you are so inclined during your visit, you will first need to obtain a permit from either the Town Hall or the Old Plantation Inn and Restaurant. 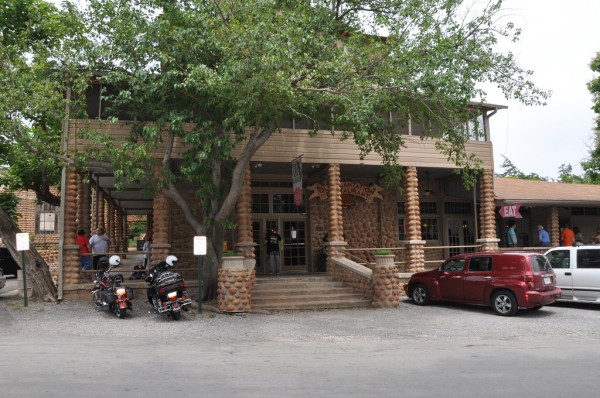 The town itself is perfectly laid out for pedestrians, with well lit and maintained sidewalks throughout. Â On this humid afternoon, it was nice to be able to stroll down tree-lined paths that offered the occasional bench to stop, rest, and admire the view. Â In addition to the original cobblestone homes, cabins, and main street, there are several more modern homes on the south side of the stream. Though not as old as the cabins, these homes were built to complement the surroundings, and it was wonderful to see the amount of art and sculpture that adorns the homes here. Â Since the girls were not allowed to swim, we decided to treat them to home made ice cream at the Medicine Park Ice Cream and Candy Company, where you can also purchase a variety of flavors of homemade fudge. Â This store is just one of many unique shopping opportunities in this artistic community. 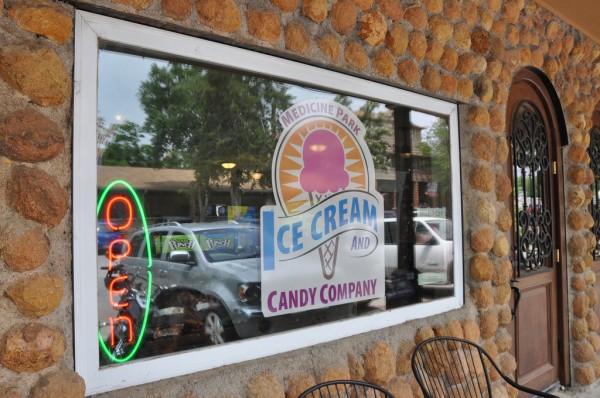 Our next stop on the journey was to see the promised buffalo in the Wildlife Refuge. Â The Wichita Mountains National Wildlife Refuge is the second-most visited wildlife refuge in the United States. Â Located within the park is Mount Scott, the second-highest peak in the mountain range. Â Mount Scott has a road that you can drive, bike or walk up to view the surrounding prairie grasslands from miles around. Â The view itself is breathtaking. It’s awe-inspiring to know that these granite giants were as grand as theÂ HimalayasÂ millions of years ago. Â After our journey to the top of Mount Scott (with several stops at scenic pull-off areas along the way), we were not left with much time to explore the whole of the refuge, but we were able to see one of the promised bison fairly up close during our drive. Â The next time I come to visit, I will definitely make sure Â I explore the rest of this magnificent grassland. 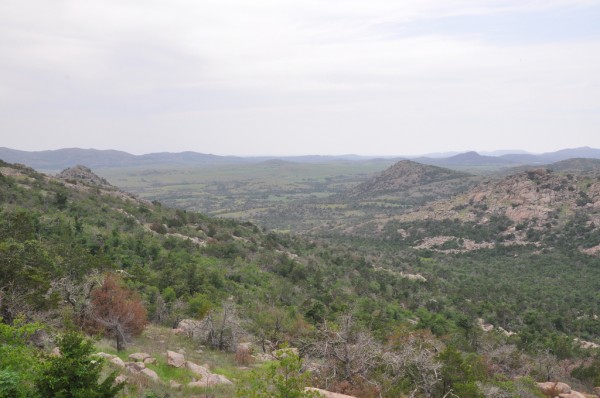 The final stop on our trip was to the “town” of Meers. Â The only remaining structure in this former gold-rush hamlet is the Meers Store & RestaurantÂ which promises “The Best Burger in Oklahoma”. Â Well, with a guarantee like that, I was more than willing to see if the claim was true. The structure itself was build in 1901, and consists of a hodge-podge of buildings that have been added to a former home, making this an eclectic dining experience. Â The restaurant does not accept credit or debit cards, and checks are only approved if drawn on a local bank, so make sure to stop at the ATM if you plan on eating here. Â There was a short line when we entered the establishment, but our wait was not long before we were ushered into a dining room that vaguely reminded me of the old “Molly Murphy‘s” restaurant in Oklahoma City. Â Drinks here are served in huge Mason jars, so you don’t have to worry about refills. Â My husband and I each ordered the cheeseburger with a side of fries. Â One of the girls ordered a chili-cheese dog, while the other opted for a mini-burger. Â The restaurant prides itself on raising and grinding its own beef from their personal Texas Longhorn stock (OU fans will appreciate the idea of consuming Bevo) located next to the store. 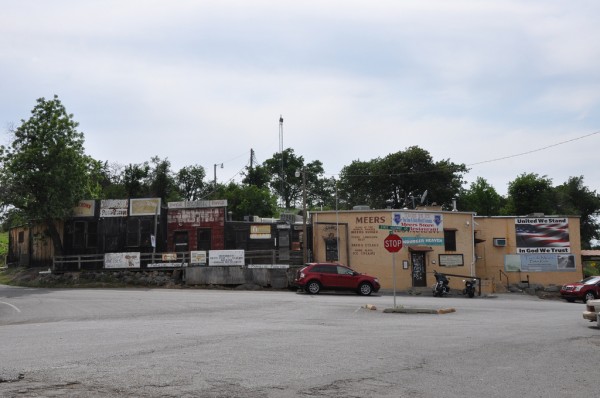 Once our food arrived and we began to eat, I have to admit that we were disappointed. Â I’ve definitely had better burgers elsewhere, and the fries were of the frozen variety you can buy in any supermarket. Â The chili-cheese dog came with the toppings on the side, and my sister enjoyed being able to add as much or as little as she pleased to her frank. Â The mini burger was the size of a slider, and the bun resembled a dinner roll and was slightly hard (I’m not sure if it was toasted, or just stale), so my niece decided that she would just eat a few Freedom Fries (as they are named on the menu) instead. Â The place was packed with locals, so perhaps we were there during an “off” time for the cook, or maybe we just don’t have the palate to appreciate their offerings? Â Either way, it is a personal call, and you are more than welcome to try it for yourself and let me know if your experience differed from mine.

With summertime just around the corner, I would definitely recommend packing up the family for a fun day trip and enjoying all that Medicine Park has to offer. Â Between the shopping, dining, hiking, climbing, and all the water sports that two local lakes (Lake Lawtonka and Lake Elmer Thomas) have to offer, you won’t find yourself with a shortage of things to do and see. Â Best of all, the majority of these activities are FREE. Â So, get up off the couch and head on down the H.E. Bailey Turnpike to create some great memories that will last a lifetime.