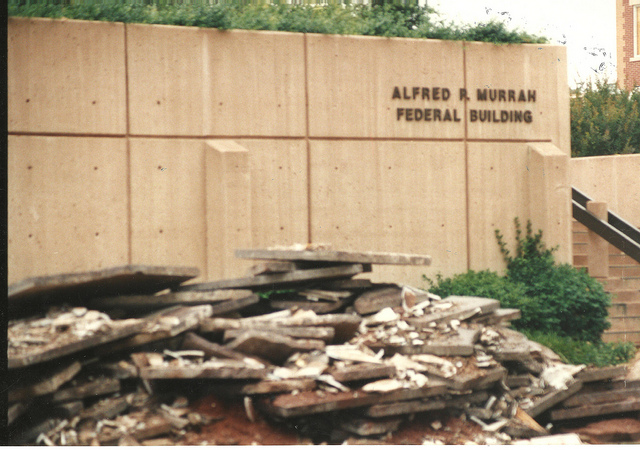 On this day, seventeen years ago, I awoke to sunlight streaming through my bedroom window, and my mother’s voice calling me to get up. At this point in my life, I had dropped out of high school to care for her after major back surgery as she could not care for herself. My Mom had a 9 am appointment at Social Security office in the Murrah Federal Building downtown. We were going to see if she could qualify for temporary SSI disability payments, as there was no way she would be working anytime soon.

By 8:45, my perpetually late mother was still not ready to go, and so she called her caseworker to let her know we were going to be late. The lady told her that was okay, because she was helping someone else at the moment and happened to be running behind schedule too. I’d already been dreading the drive to downtown Oklahoma City that day; I hated the traffic, the one-way streets, and the search for parking. I had planned on dropping Mom off at the front of the building, and then cruising around until I found a parking space. Meanwhile, myÂ step dadÂ – who was a vending route driver for Coca-Cola at the time – was supposed to be at his account in the Journal Record building, directly across the street from the Murrah Building. Instead, he chose to take care of his routes on the north side of OKC before heading downtown. He had been waiting for the morning traffic to thin out too.

At 9:02 am, on that beautiful, cloudless morning just before leaving the house, we heard what sounded like a huge rumble of thunder, and our windows shook (for reference: we lived 20 miles from the blast). I looked outside, to see if there were any indication of rain, but there was nothing to be seen. We had the television on, and suddenly there was a breaking news report that there had been an explosion at the Murrah Building. We thought it had been caused by a natural gas leak, we hadn’t even considered the possibility that it was an act of domestic terrorism. Mom and I were flabbergasted; that’s where we should have been that morning. At the time of the blast my dad had been on a payphone with his boss. First, through the phone, and then through the air, he heard the explosion. When he found out on the radio that it was the Murrah Building, he was panic stricken, thinking that my mother and I were hurt. Â Of course, we thought he was in the Journal Record building and may have been injured as well. The phones lines were all tied up, so initially we couldn’t reach each other. My dad finally raced home just in case we were there, or to see if my brother (who was home sick) knew when we had left. It was with a great relief that we discovered we were all okay. However, my dad’s co-worker was not so lucky. His wife, a nurse, rushed to the scene to be of assistance. While searching for survivors in the rubble, a piece of concrete fell from above, and struck her in the head, killing her. She left behind four children. My mother’s caseworker was also killed.

168 innocent people, including several children in a daycare center, would perish that day. Those who survived carry the physical, mental, and emotional scars to this day. Some sought closure through the trial, conviction, and execution of Timothy McVeigh. Some found other ways to reach resolution. Neither way is right nor wrong.

I am so proud of how my fellow Oklahomans handled themselves in the wake of this enormous tragedy, and I continue to hold that pride all of these years later. Â When I was working for a law firm downtown, I had an office that directly overlooked the memorial. Â In my own way to honor those lost it became a daily ritual for me to look at the “Survivor’s Tree,” which has become a symbol for us all that even in the face of death, life goes on.

The photos below were provided to us by a private collector.