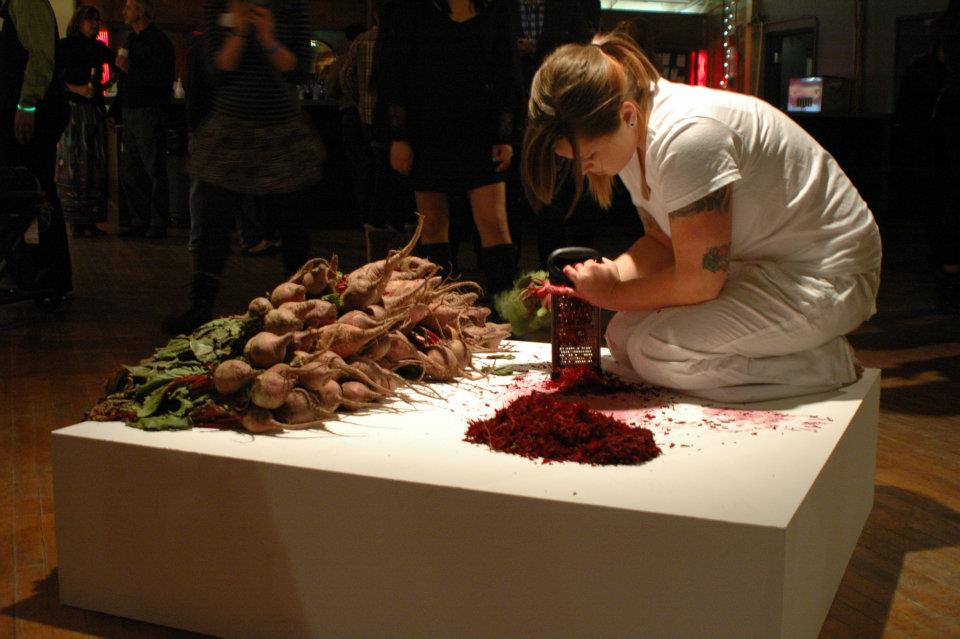 Even in the middle of a bustling art event like Momentum, Alexandra Knoxâ€™s performance piece “The Refusal to Forget” commands attention.

For this piece, Knox kneeled on a low white pedestal dressed entirely in white. Using a simple hand grater, she methodically grated a pile of 100 beets that lay in front of her, gradually coating and staining her clothing, pedestal, and hands in bright red.

This piece–and much of Knoxâ€™ work–is informed by an ongoing examination of her Ukrainian heritage, and by her wish to better understand this culture. â€œI feel the most Ukrainian when I cook Ukrainian meals,â€ she begins. â€œBeets are a staple in Ukrainian cuisine and culture. This piece is about a refusal to forget where part of me comes from.â€

Knox is currently pursuing a Masterâ€™s of Fine Arts at the University of Oklahoma, after earning her Bachelorâ€™s of Fine Arts in sculpture at East Carolina University. Her undergraduate studies provided her with a solid background in traditional skills–sculpture, welding, and other building methods–that Knox describes as a solidly â€œformalist-basedâ€ education.

The deep magenta liquid that welled-up as Knox worked was meant to evince blood, and our different associations with it. First, blood is a symbol of kinship and relation. Knox describes looking at her stained skin and having impression of being â€œstainedâ€ with a lineage she loves and seeks to understand. Second, the â€œbloodâ€ refers to the strenuous physical work of the performance. Knox anticipated some discomfort during the piece, but some came as a surprise. â€œI expected that it would be difficult, and endurance through the physical stress was one of my goals in this piece,â€ she explains, â€œBut I didnâ€™t expect my feet to go numb in the first ten minutes.â€ 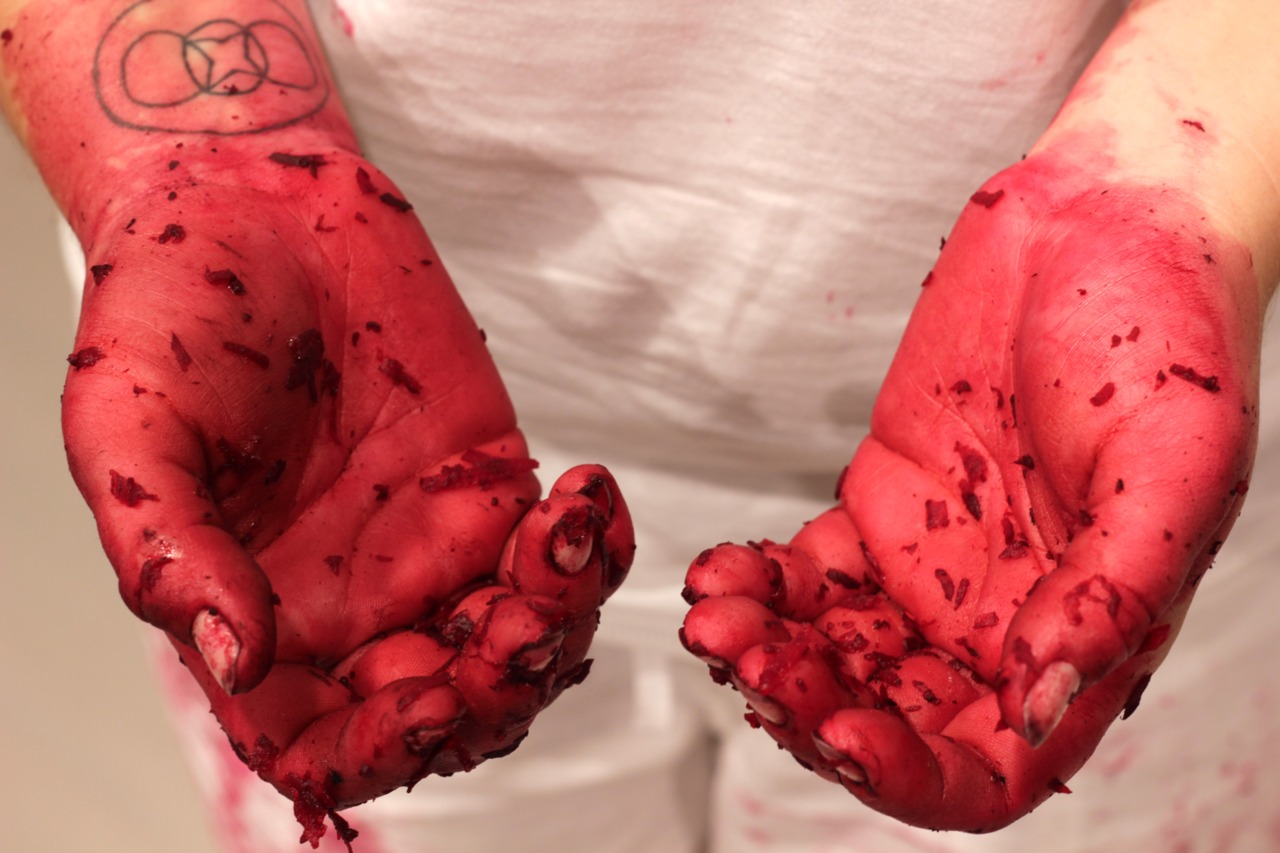 Surprisingly to Knox, this discomfort evoked some complex–and unpredicted–thoughts on her familyâ€™s history. â€œI found myself feeling really grateful. I kept thinking about my grandmother who survived famine as a young girl in the Ukraine, and what she had gone through. I thought, â€˜Iâ€™m not starving. This isnâ€™t that bad.â€™ It became a meditation that helped me keep my focus.â€

***
From 1932 to 1934, the famine in the Ukraine took millions of lives. Estimates range from 2.4 million to 7 million deaths during this period. Known as Holodomor, or The Great Famine, many scholars describe this event as an intentional famine, executed by Josef Stalin to punish the Ukrainian people for their continued national aspirations. In a 2003 statement, the United Nations seemed to agree, condemning the event as man-made genocide.

Alexandra Knoxâ€™ grandmother survived the famine, but the experience permanently altered the way she viewed food, cooking, conservation, and wastefulness. Some of the lessons of food preparation were passed on to family. In addition to learning to make do, she gained a deep appreciation for what she had, and the evidence of this is recorded plainly in her daily journals, which Alexandra has studied: â€œShe wrote what she ate every day of her life.â€ 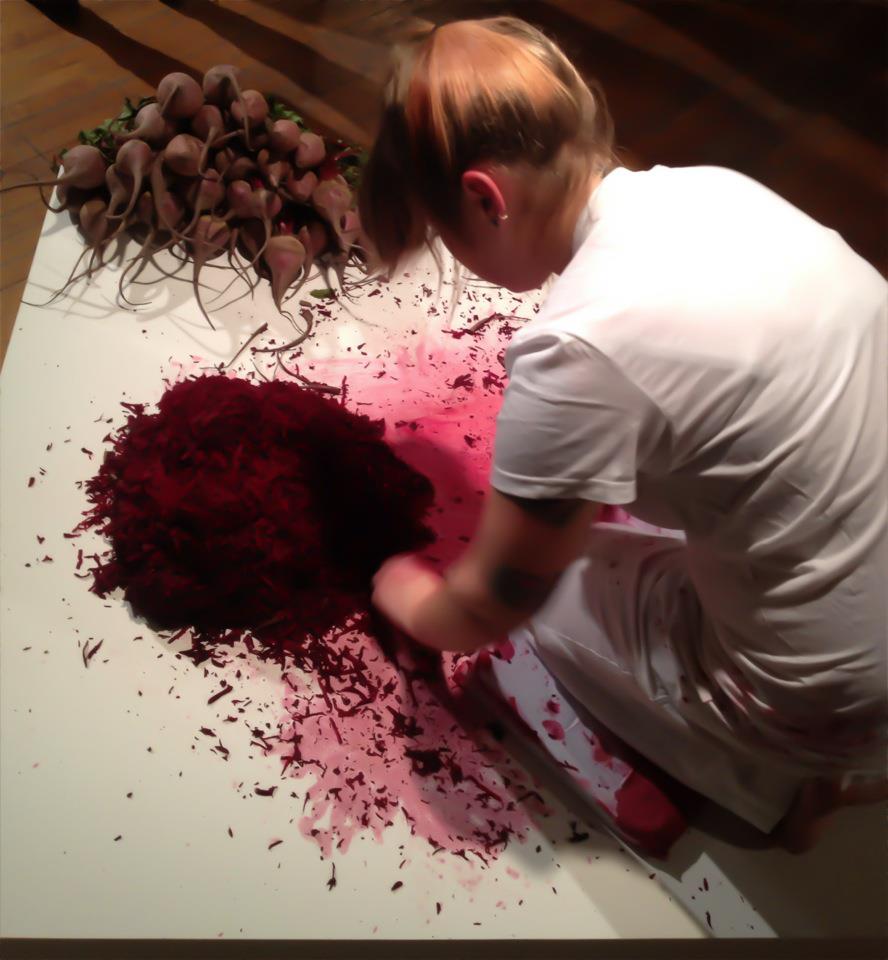 Ukrainian tradition, history, and heritage is woven into “The Refusal To Forget.” Although some of Knoxâ€™ motives and driving impulses may be impossible for audience members to know at a glance, there is something in this work that is instantly compelling to viewers. Evidence of this was obvious from the crowd that grew around her as she worked. Collectively, cheers and applause broke out all around her as Alexandra picked up her last beet.

Knox says she did not anticipate some of the different audience reactions she received: She smiles as she recalls the applause at the end of each nightâ€™s performance, coming at the height of the physical stress of the piece: â€œIt was so encouraging.â€ Other audience members tried to engage Knox during her performance. Some people approached the podium to talk to her and ask questions about what she was doing. â€œA few people definitely thought it was interactive,â€ she comments in surprise.

One early attendee even climbed onto the pedestal and began to grate the beets himself, until volunteers spotted him.

The piece certainly engaged audience members easily, and Knox gives some credit to her subject matter: food. â€œFood is instantly relatable to people; food is universal. Everyone knows something about food, and so there is an automatic relationship there.â€ Everyone also, it seems, comes to food with their own specific emotional history. One viewer, speaking after the performance was finished, told Knox that she resonated with the piece because she loves to leave her hands stained with beet juice for days every time she prepares them.

In 2011, Knox created a different installation for Momentum that involved similar themes. The Scent in Which She Lingers used the aroma of garlic alongside video in a small enclosed space. The piece was an homage to Knoxâ€™ grandmother, who ate a clove of garlic every day of her adult life. In the installation, gauzy fabric saturated with garlic scent falls in curtains in a small, dark space while the (extremely slowed down) video shows her grandmother cooking. Between the strong smell and the almost-frozen moving images in the video, the installation leaves viewers with an experience as indelible–and as fleeting–as memory.

Knox considers a breakthrough- the first time that she had used food as an evocative element in her work.

The elements of food, memory, and family history will be developed even more in her thesis work. Her MFA show (along with the thesis work of all eight current OU MFA candidates) opens at Mainsite Gallery in Norman on April 13.

On display will sit jars of pickled and preserved beets- the very same beets grated during her Momentum performance. It was important to Knox that she use proper, traditional preservation methods to jar them. She plans to have the jars inspected by OUâ€™s microbiology department to ensure that they are safe to eat, and eventually, to sell the beets. In this way, the performance piece remains in process, dynamic and subject to continued interaction.

In addition to the jarred beets and video of “The Refusal to Forget”, Knoxâ€™ work on display will include large boards screen printed with images of her family members, and depictions of her grandmotherâ€™s daily journal entries. 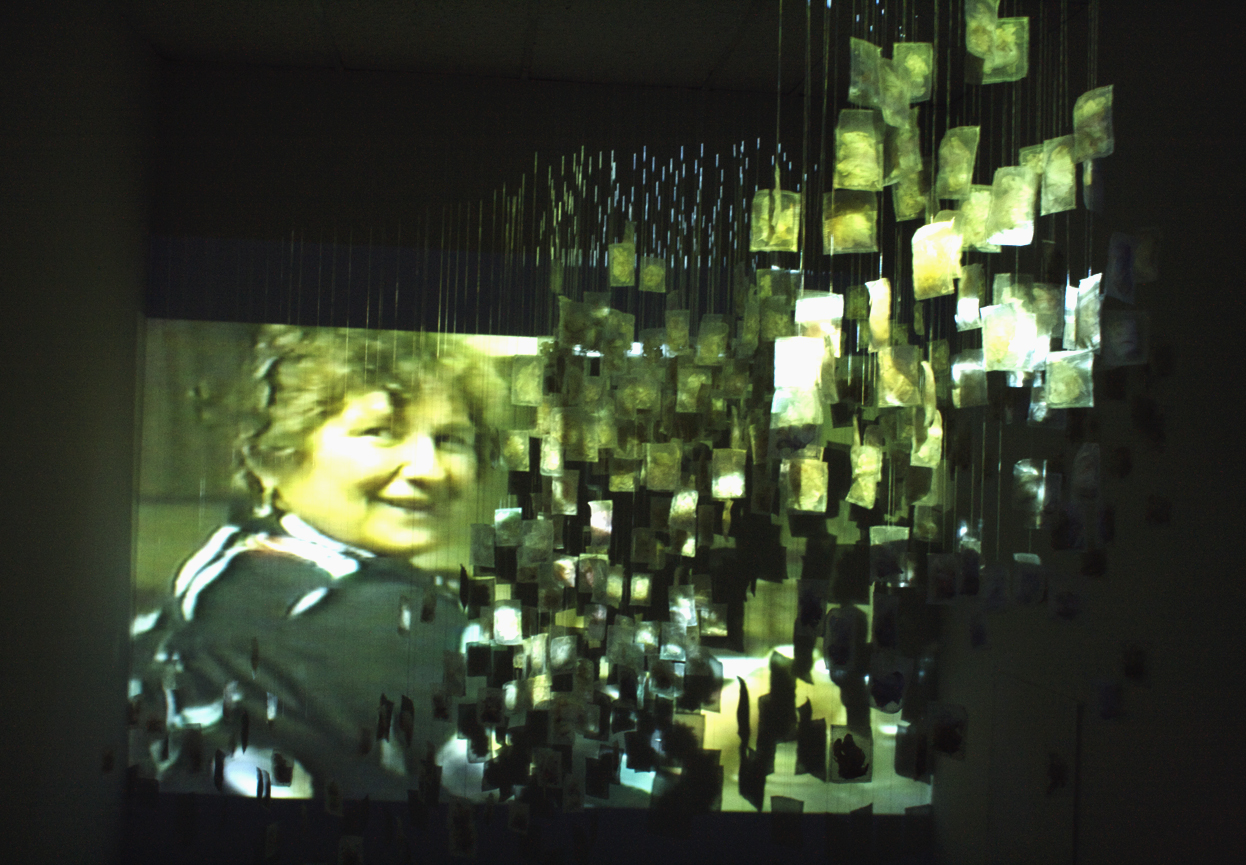 After earning her MFA, Knox plans to continue making art. She is also interested in teaching. â€œI think that being an artist is great,â€ she explains, â€œbut in some ways, itâ€™s even more admirable to pass down knowledge to others. Teaching is one of my ultimate goals.â€

Knoxâ€™s future goals also include learning the Ukrainian language. â€œIn studying any culture, there is something of an understanding gap if you donâ€™t know the language,â€ she explains. She seeks to bridge this gap.

In attempts to fill the gaps between what she knows of her cultural background and what she seeks to know, Alexandra Knox creates moments and spaces that ache with a longing for connection. She creates this connection not only with her own past and familial memory, but with the viewers who encounter her work. Indeed, the more specifically Ukrainian her points of reference are, the more universally the themes of identity, tradition, and investigation seem to resonate. In casting these themes in the medium of food and tradition, Knox creates visceral experiences that paint her familyâ€™s history–and her own search for knowledge– in vivid, saturated color. 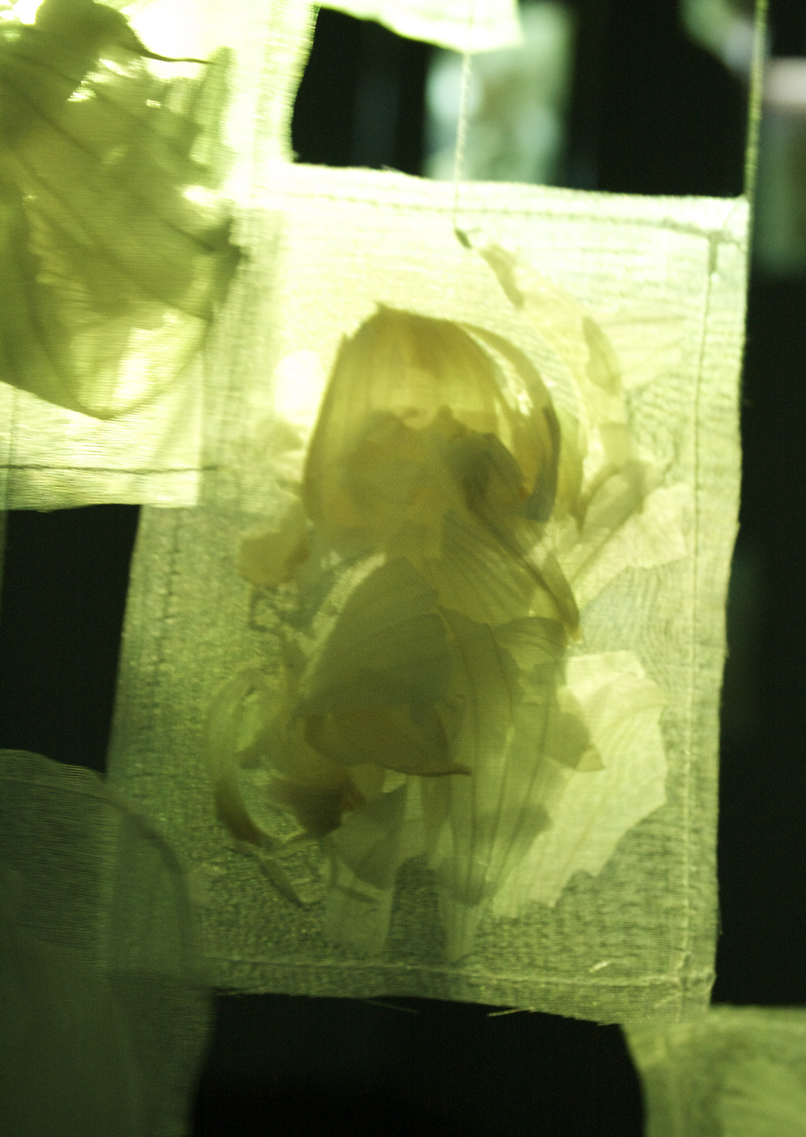