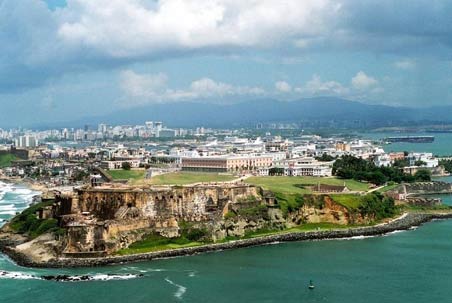 Puerto Rico, where the President isn't.

I am staunchly in favor of Mary Fallin taking vacations out of state. If I could book her an 8 month long journey of self discovery ala â€œEat, Pray, Loveâ€, I would do it, and not just because she would look dynamite in saffron. I generally want the governor to be as indisposed as possible, because generally speaking, the less efficient the Republicans in State Government are, the better it is for the citizens of Oklahoma.

I am perhaps slightly old fashioned in that I think that when the President of the United States comes for a visit, you should probably meet him. He is, after all, the duly elected leader of our fair Republic, and Oklahoma isn’t the sort of place that generally entertains many world leaders. I think many Okies share this perception, which is why the cries of outrage from people of all political stripes at the absence of our Governor when Air Force One landed were fairly predictable. We on the left are quite sensitive to the fact that the right has done everything in their power to delegitimize this President, so this snub feels on a visceral level like another in a long line of indignities piled upon a man that more than half of our nation’s voters chose to lead us. Sorry guys, he’s the president, and if the hairbags the Republican Party have dug up this time around don’t get personality transplants soon, he is likely to stay that way. That’s just how the system works. Personally, I wish he were an actual socialist. If I could press a button and turn Oklahoma’s political culture into one more resembling Norway, I would probably press that button. I like a good fjord as much as the next guy.

I don’t generally cut Madam Governor any slack, but I honestly don’t think this was that big of a deal. If this were a situation where the President of the United States had come to Oklahoma to talk energy policy with the governor or to consult on a dire Chicken Fry shortage in some other part of the country, I would be completely pissed if she refused to meet with him. This was clearly just an election year photo op for the President, so I honestly don’t see any reason why Governor Fallin needed to be there. Mary is a good politician and a cynical opportunist, so she knows better than to piss off her base by appearing to be too friendly with â€œthe other side.â€ Given that the far right has never been happy with Fallin, we can at least celebrate the fact that we won’t be seeing any grainy black and white footage of her smiling and shaking the president’s hand in a Randy Brogdon ad next election. Allow me a digression:

VOICEOVER: But did you know that she opposed a bill to set fire to immigrants and gay people?

VOICE: I’m Randy Brogdon, and I approved this message.

That’s the world we could be living in. Consider that.

Is it disappointing that we live in a time and place where rank partisanship is more important than quaint notions of decorum and civility? Absolutely. Am I shocked or scandalized by this? Absolutely not. I would have advised her to do the same exact thing. It’s just politics.

As I said, I am in favor of the governor spending as close to zero percent of her time governing the state as is humanly possible, and I hear Puerto Rico is lovely in springtime. Why not take another couple weeks or months off? Treat yourself.