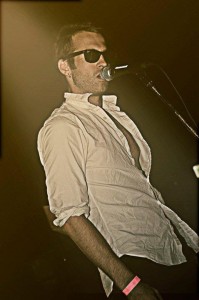 Face it. You only wish the band names you thought up in 7th grade were as cool as Chrome Pony.

Steven Battles, also known as Chrome Pony, is a self-described crooner/composer who hails from Norman, OK.

Chrome Pony will likely be an experience for anyone going to the 2012 SXSW Music festival, but fair warning: going to see Chrome Pony is a lot like rolling the dice. For example, last weekend Chrome Pony played three shows and each one was different.

Thursday night was the “Chrome Lounge” at McNellies in Norman. Battles does this weekly and usually spends the night playing lounge music and other lounge style covers.

Friday night was “Chrome & Friends,” and I can’t speculate what truly happened since I wasn’t there. Battles said on his Facebook page that this show was going to be a full band and not just him going solo. Chrome Pony has some tracks on iTunes, which include the one from the video posted below and if you watch it you will quickly gather that it’s not really lounge music. This is a huge difference between what happened on Saturday night.

Love in a Genocide from Chrome Pony on Vimeo.

Saturday night was “Solo Chrome.” This is perhaps the best time to interject and declare my favorite Chrome Pony variation. My first experience with Battles’ music was in this incarnation and I’m sure it influences my preference. Hearing Battles sing a song so tenderly and so meaningfully really spoke to me that night at VZD’s.

Which brings me to my next point: my favorite Chrome Pony song. “I Don’t Wanna Break Your Heart,” melted me. It was as if Battles found all those notebooks of poems and songs I wrote when I was in ninth grade, saw what I had meant to say, and then chose to play something better than I ever would or could.

The guitar subtly lifts Battles easy croonings to a level that makes me believe him. He really doesn’t want to break my heart! Well, at least not tonight.

So the question remains, which version of Chrome Pony will SXSW’ers be exposed to? Solo Chrome? Chome & Friends? Some kind of hybrid experimental Chrome? That’s something that only Battles knows, and I haven’t got around to asking him yet.

For now, I’ll leave you with this. Chrome Pony performed a song on KSBI 52’s “Oklahoma Live” back in February. And host Lyn Hester is just adorable as she introduces Battles and talks to him about his music.

My favorite part of watching Chrome Pony on KSBI is that Hester’s interview with Battles plays out like a really excited grandmother showcasing her grandson. As you can clearly see at the end of the video, Chromey makes Granny very proud.

Hopefully Chrome Pony can make Oklahoma very proud when he heads off for Austin later this month. Until then support him by following him on Twitter (@the_chrome_pony), on Facebook or at his website http://www.chromeponymusic.com. To get a taste of the “chromebelievable” live experience check out Chrome Pony this Friday night in Norman with Young Readers and The Night Cart at Pepe Delgados.